Despite the absence of Don Bradman, the South Africans were thrashed by Vic Richardson's men. Then their baseball players challenged the Australians — at baseball.

At Old Wanderers on March 7, 1936, the touring Australian cricketers won the Jock Cameron memorial baseball match at Wanderers against a Transvaal baseball side. Abhishek Mukherjee looks at the day when playing cricket led to an unexpected triumph.

It was one of those surreal line-ups. The Australians found themselves under completely alien circumstances. The match — meant to raise funds for Jock Cameron Memorial Fund — was originally scheduled to be a cricket encounter between the tourists and Transvaal.

The South African cricketers may have been optimistic and the spectators heartbroken when Don Bradman was declared unfit for the tour. It did not matter: Richardson’s men steamrolled the Proteas at their den, not losing a single match and clinching the five-Test series 4-0.

Grimmett and O’Reilly shared 71 wickets between them during the Test series, while Fingleton and McCabe took the batting honours.  In all First-Class matches, Grimmett claimed 92 wickets at 14.80 and O’Reilly 95 at 13.56; McCormick chipped in as well, but his tally of 49 wickets 18.06 looked rather pedestrian in comparison.

[Note: There have been speculations regarding the real reason behind Bradman’s unavailability on the South Africa tour. He had suffered from acute appendicitis in England in 1934 but had recovered fully. With Bill Woodfull retiring, Bradman was named captain to South Africa, but on August 8, 1935 the Board announced that he would miss the tour on fitness grounds. Richardson was appointed captain. Interestingly, Bradman led South Australia that Australian summer, scoring 1,173 runs at 130.33 including a 253-minute 369 against Tasmania.]

Horace Brakenridge “Jock” Cameron, one of the finest wicket-keepers South Africa has produced and a belligerent batsman to boot, had passed away of enteric fever three weeks before Australia landed in South Africa. He was only 30, was immensely popular, and his death was mourned by many.

The Australians unanimously decided to play a match to contribute to his memorial fund. They had already played Transvaal twice on the tour, winning by ten wickets and an innings, Grimmett taking 9 wickets in the first match and O’Reilly ten in the second.

On the other hand, the Australians were not really keen on playing Transvaal after the one-sided shows. They wanted a tough battle. They suggested — somewhat tentatively — whether Transvaal will be keen to play the tourists for the same cause. After some deliberation (mostly due to the fact that baseball’s rising popularity was pushing cricket back in South Africa) Transvaal agreed. Perhaps the fact that Transvaal had won the last South African baseball championship had to do with it.

Vic to lead, Grum to coach

Richardson, captain of the Test side, had also won the South Australia tennis title, represented South Australia in golf, played lacrosse for his district, was an ace swimmer and basketball player, won the Magarey Medal (South Australia Football League’s highest individual honour), and among everything — had also represented Australia in baseball. McCormick, Barnett, and Darling had played baseball regularly as well, which meant that the side had four certain members.

What about the coach? Fingleton wrote in Cricket Crisis: “Grimmett, who had never played the game, but whose general theorising on sport was always profound, was unanimously appointed coach of the team, it being naively pointed out that in the circumstances there was a wide difference in being coach ‘to’ and not ‘of’ the team.”

Grimmett got a tad too serious for comfort: on the trip from Durban to Johannesburg Grimmett actually conducted a lecture, complete with a blackboard, chalk, duster, and a notebook complete with lessons. Unfortunately, “banter and chaffing” made the “class” rather difficult for the baseball coach.

The Australians practiced on the diamond at Old Wanderers the next day. Fingleton wrote: “The scene in the dressing-room was ludicrous as players garbed for the field. O’Reilly as all legs in baseball pantaloons; Richardson, McCabe, Oldfield, and the rest, so at ease in their cricket flannels, looked guys in their baggy breeches, football socks, and baseball blouse.”

Everything went fine that day. The Australians scampered from base to base; they threw perfectly, including the spit-ball (“a spit-ball is a baseball pitch, in which the ball has been altered by the application of saliva, petroleum jelly, or some other foreign substance” — Wikipedia; unfortunately, it is considered illegal as per the current laws); the throws were perfect; the home-runs flowed; in short, everything fell into order. Everyone (perhaps more so because of Bradman’s absence) was ready for a day of fun.

It was only next morning that the Australians realised that they had played into the hands of Transvaal. The media had taken the match rather seriously. A big headline ran: Transvaal’s Chance to Atone for Cricketing Defeats. The article read: “All sporting South Africa will follow the baseball game at the Wanderers this afternoon with the keenest interest. The Transvaal team has a splendid opportunity of inflicting upon the Australians the first defeat of their tour.”

It was then that the enormity of the incident dawned upon the tourists. Fingleton wrote: “The joke was now very much on us. We had put out our chins, so to speak, and all that was left of us to take it.” The spirits sagged. What chance did a bunch of cricketers stand against a team of seasoned baseball professionals in a game of baseball?

A 30,000-strong crowd greeted the Australians at Old Wanderers as they ran through the gate. A glance confirmed that the hosts had an incredibly strong side, complete with an American battery (pitcher-catcher combination). “They would, we felt, simply blind us with American science and small talk,” Fingleton dryly remarked.

Meanwhile, the Australian practice went horribly wrong: throws went haywire and catches were grassed, and with every such lapse the barracking became more and more intense. The crowd that had never booed Richardson’s mighty yet amicable Australians were now ready to witness the tourists’ only defeat of the tour.

Richardson decided to “bat”. Randall effected 9 consecutive strikes. The Australians swung furiously in Gilbert Jessopian style but could not connect. The Australians — the mighty Australians who had decimated the South Africans throughout the tour — now conceded 9 strikes in a row.

The Australians walked out to field. Soon, McCabe was under a skier; for a moment it seemed that he would take his glove off and take the catch bare-handed, but remembered at the last moment that this was a separate game: he tried to use his glove and grassed the chance.

Five minutes into the innings Transvaal had taken 2 “home” and were already in the lead. Richardson took his mask off and got his team into a huddle for some pep talk. While the Transvaal coaches and reserves said “rude and personal things, very rude and very personal, about Australians in general”, O’Reilly and Oldfield — the Australian counterparts — were nowhere to be seen.

Things improved, but Transvaal retained their 2-1 lead after the third innings. Then, after Randall effected another strike against Darling, McKenzie walked forward, held the ball under Darling’s nose, and said: “Saay, you horn-woggled son of a guy! Help yer’self to an eyeful of this lil’ white pill. Saay, dat’s what youse suppos’ to hit, guy. Wassa matter wid youse Aussie lallapoloosas?”

Whether Darling could make head or tails of the cuss-words is another story, but his response shocked Fingleton: “Let no one say that what followed was not cricket. It was not cricket we were playing, and what Darling did was evidently good baseball tactics. He gave the Yankee a contemptuous look, leaned over and spat viciously on the ball!”

The single event turned the match around. Darling connected, and how! He heaved the ball over the outfielders and ran round then entire circuit. At this stage O’Reilly and Oldfield’s heads bobbed out from under the scorer’s table. O’Reilly, in a rare meek voice, almost whispered: “Keep it up, lads, keep it up”; almost on a cue, Oldfield added: “We can do it again, we can do it again.”

Shortly afterwards, Barnett launched into Randall. The ball was connected so well that it disappeared completely out of sight for a home run. Randall was impressed: “Shades of Babe Ruth!” McKenzie added: “By the torch of the lil’ ole Statue of Liberty, what a heck of a smite!”

Out came the cricket strokes: McCabe cover-drove for a two-bagger; an effortless hook from Brown fetched another; Fingleton lofted one straight for a three-bagger; Richardson placed one through one should have been mid-on for a two-bagger; and even Grimmett tapped one for a first base.

Meanwhile, an excited O’Reilly screamed “What a sissy lot of ball-players! Who taught you mugs the game?” He even jumped on to the ground in excitement and received a send-off — but it was nothing compared to the impact the turnaround had on Oldfield.

The man of whom The Age wrote he was “such a gentleman he might have kept wickets in the gloves in which he was married,” of whom Neville Cardus wrote that he almost apologised to every victim after stumping him (“awfully sorry, but it is my painful duty — Law 42, you know.”), now yelled: “You’ll never get us out, never get us out; put on a new bowler”, he almost sledged.

The hosts fell apart thereafter. The drives and pulls came out, and the American battery gave way to new combinations. There was a strange incident when McCabe took a catch, flung the ball in the air, and ran to celebrate — only to realise that the Transvaal batsman on the first base had reached home.

Meanwhile, the O’Brien-Richardson combination worked wonders. To quote Referee (Sydney), “LBP O’Brien in the pitcher’s box and VY Richardson as catcher soon worked up an understanding almost as deadly as the O’Reilly-Grimmett combination, while McCormick’s performance at first base was excellent. The in-fielding was quite up to their Test cricket standard.”

Finally Transvaal hit one to left field, only to find an expecting Grimmett. “Grum” disregarded the gloved left hand and stuck out the bare right hand; he came up with what Fingleton called “the most sensational one-handed catch of the cricket, baseball, or matrimonial season.” The match was over; the Australians won 12-5.

A distraught McKenzie told Richardson after the match: “Your guys have put the big ball game back at least ten years in this here burg.” The Transvaal cricket legislators asked the tourists to keep their Wanderers socks as souvenirs, to which they agreed readily.

Why did a team of amateurs win? Fingleton, forever the great analyst, tried to dissect later: “The cause was not difficult to discover. Cricketers who had had their eye trained all the summer applied cricketing tactics to baseball. They fielded, threw, and batted as if in a cricket game.”

A 48-word telegram from Perth found the Australians next morning. It was, as expected, an invitation to play a baseball match there. They turned down the offer (“we knew enough about beginners’ luck to recognise it when we saw it”) as they did to another from Cape Town. 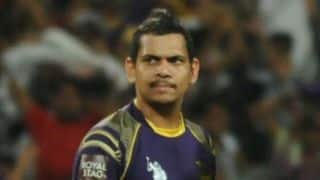