Steven Smith's one-year ban over the ball-tampering scandal is not the first time a national skipper has been removed for a reason.

Australia cricket captain Steven Smith‘s one-year ban over the ball-tampering scandal is not the first time a national skipper has been removed for a reason other than a loss of form. AFP Sports highlights five other team leaders who were banished to the ranks or the wilderness for shaming the captaincy:

There was a collective gasp of astonishment when it was revealed in 2000 that the South Africa captain had orchestrated a match-fixing ring involving three other players, including for the one-innings fifth Test against England in 2000 when he accepted a leather jacket and a cash sum for ensuring there was a result. Cronje, along with 1995 Rugby World Cup winning skipper Francois Pienaar, had been seen as the poster boys of post-apartheid sports. Cronje was subsequently banned for life by the King Commission and failed to have it rescinded on appeal.

His dramatic fall from grace reached a tragic climax when he was killed in a plane crash in 2002. “It is said that once the bookmakers have got you, they’ve got you for life,” wrote Ali Bacher, who headed up post-apartheid cricket and considered Cronje like a son, about a change he saw come over him in 1999. “He must have been noosed by these bookmakers and he was desperately looking for a way out.”

Gatting was ostensibly fired for an alleged bedroom encounter with a waitress at the England team hotel on the eve of a Test match with the West Indies in 1988. But Gatting believed he had already sealed his fate the previous year with his confrontation with Pakistani umpire Shakoor Rana in Pakistan at the end of 1987. The two engaged in a bizarre and acrimonious shouting match during the second Test in Faisalabad that delayed the match and almost triggered a major diplomatic incident.

Although backed by his bosses at the time, Gatting is sceptical how far the support stretched. “I was forced out of the captaincy because of the Shakoor Rana incident,” he told The Cricket Monthly in 2011.

The Senegal-born defender is the son of a diplomat but any diplomatic skills he learned from his father were tested to the limit when he had to deal with France’s idiosyncratic coach Raymond Domenech at the 2010 World Cup. Infuriated by the expulsion of troublesome striker Nicolas Anelka — after a foul-mouthed rant at Domenech — the squad refused to train and stayed on the coach whilst the TV cameras captured Evra remonstrating with the French fitness trainer on the training ground in South Africa.

For his part in the players’ strike he was banned for five games but earned a recall subsequently under the new regime of Laurent Blanc and went on to appear in the 2014 World Cup.

Irish firebrand Keane found his style of straight talking did not chime with national manager Mick McCarthy. As Ireland’s sole world-class player he had been the natural choice for skipper for the 2002 World Cup. But an interview to the Irish Times criticising the poor training facilities on Saipan island in the Pacific ahead of the tournament and then a foul-mouthed tirade against McCarthy in front of the whole squad led to the only outcome possible — he was sent home.

Midfielder Matt Holland wrote in his column in The Independent: “People say Roy Keane went over the top. I would say he overstepped the mark by as far as Bob Beamon did when he broke the long jump world record in Mexico in 1968.”

Carling had guided England to three Five Nations Grand Slams including the 1995 edition months ahead of the World Cup but that was not enough to save him when he was caught on camera describing his employers at the venerable Rugby Football Union as “57 old farts”. However, Carling’s manager Jon Holmes mediated between the two parties and after two days he regained his captain’s armband. “I thought they (the RFU) were going to cave in at some time,” Holmes told The Independent at the time. 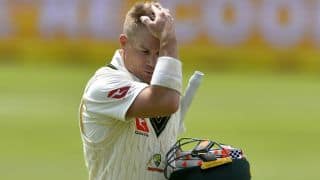