Often considered as the most dangerous minnows, Bangladesh have yet again showed their ability to challenge a stronger Test playing nation in the longest form of the game and got the better of them in the One-Day International (ODI) series. Prakash Govindasreenivasan looks back at their successful home series against New Zealand and wonders if it is a sign of things to come. 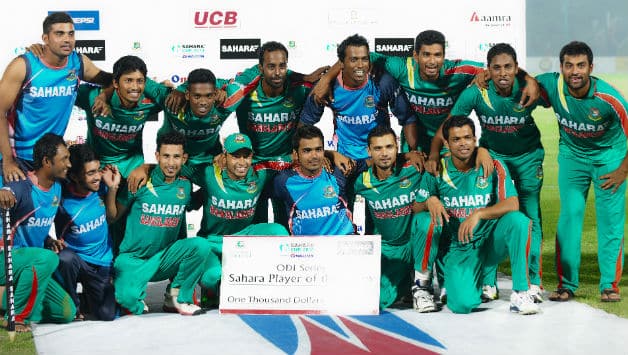 Often considered as the most dangerous minnows, Bangladesh have yet again showed their ability to challenge a stronger Test playing nation in the longest form of the game and got the better of them in the One-Day International (ODI) series. Prakash Govindasreenivasan looks back at their successful home series against New Zealand and wonders if it is a sign of things to come.

If there is any trait that keeps Bangladesh away from being considered a real match to any of the stronger Test playing nations, it is their inability to sustain their sudden form that comes up every now and then to trouble an opposition supposedly stronger than them. Often, one talks about Bangladesh when they line-up during a World Cup to spoil a side’s party with a surprise win and then soon fade away by the end of the tournament. Their consistent inconsistency has been a stumbling block for their growth and continues to make them look like ‘flash in the pan’ performers.
The start

The way Bangladesh all-rounder Sohag Gazi’s Test career began, even the man himself could not have imagined it unfold the way it did in his wildest dreams. What began with a six off Chris Gayle’s willow off the first delivery he bowled in Test cricket in 2012, came to a stage where he setup a confident draw for his side against New Zealand in the first Test at Chittagong in 2013. That game in 2012, witnessed four centuries and a double ton from Shivnarine Chanderpaul, building another monumental innings in trademark style and will yet go down in history for Gazi’s exponential achievements.

First, he slammed a splendid century while batting at No 8 and then went onto take a hat-trick — the first player to achieve these two feats in the same game. During the course of his exploits, Gazi joined fellow countryman Shakib-al-Hasan and Ravichandran Ashwin to score a ton and take a fifer in a Test. Gazi, like most of the earlier heroes of his country, was singlehandedly making the hosts look the stronger side among the two.

The second Test saw New Zealand start well to dismiss Bangladesh under 300 and take a 155-run first innings lead. Just when Bangladesh showed their knack to match up to the standards set by the Kiwis in the first Test, they were found wanting in the second. Seasoned campaigner Tamim Iqbal and young Mominul Haque stepped up to ensure a draw.

One factor that drives the Bangladesh cricketers across generations has been the state of mind and confidence levels. When they take the field at the start of the game, they walk in with the genuine hope of giving a tough fight to any opposition and strongly believe that they can scale any heights if they truly want to. Along the way, based on their early performances, their confidence either shoots up or takes a beating. In this case, a strong, spirited show in the Test series meant they went into the One-Day International (ODI) series as an upbeat unit.

The hosts continued from where they left off in the Test series, as Rubel Hossain replicated Gazi’s form and effort to pick up a hat-trick and a fifer to turn the first ODI at Dhaka on its head. When rain interrupted play, New Zealand’s target went from 266 to 206 in just 33 overs. After Gazi and Mahmudullah dismissed the openers, Hossain ran through the middle-order to help his side draw first blood in the series with 43 run win via Duckworth/Lewis method.

The confidence, which went a few notches higher after the first ODI win, helped them put on an all-round showing in the second game. Riding on Tamim Iqbal’s 55 and valuable contributions from Mominul Haque and Mushfiqur Rahim, Bangladesh put 247 runs on the board. Mashrafe Mortaza and Gazi operated from either ends and stifled the Kiwi batsmen into submission as the visitors failed to keep up with the rising asking rate. In the end, New Zealand were bundled out for 207, giving Bangladesh a series win in the three-match series.

The visitors had pride at stake when they played the final ODI in Fatullah. Former skipper Ross Taylor took the onus upon himself and the attack to the opposition by scoring a 93-ball knock of 107 to guide New Zealand to 307 — a total which most Kiwi fans would have found good enough even at a time when Bangladesh were flying high. Bangladesh, however, emerged past their reputation to complete a thrilling 3-0 victory to bring back memories of their 4-0 victory over the same opposition in 2010. A well-paced knock of 96 from Shamshur Rehman at the top of the order and 63 off 74 deliveries from Naeem Islam in the middle-order put Bangladesh on track in their chase. In the end, they got to it with four balls to spare.

Bangladesh would love to have finished the series with a win in the only Twenty20, but that did not go their way as New Zealand won the match by 15 runs. However, that probably did not have any bearing on the confidence that the other series win had built up. They will also take heart from the fact that this series has given them new heroes who can help Bangladesh grow in stature in the limited-overs format of the game and gradually build in Tests as well.

The next time this bunch of players play, it will be in the ICC World T20 in 2014. Between now and the tournament, which is close to four months away, the team needs to look at gelling together and making a blueprint that ensures that they will be more than just giant killers.

It will be a real test of their character: whether this victory was another flash in the pan performance or is it a sign of good things to come in their future? We will have to wait and watch.

Sachin Tendulkar is a great batsman and a good human being: Rahul Gandhi