Though Australia are placed fifth in ICC Test rankings, way ahead of Bangladesh at No. 9, both teams played competitive cricket to make both Tests interesting.

Australia had almost certainly backed themselves to win the final Test and level the series against Bangladesh, and they did exactly that. Though Australia are placed fifth in ICC Test rankings, way ahead of Bangladesh at No. 9, both teams played competitive cricket to make both Tests interesting. Here are some highlights from the exciting second Test that decided the fate of the series. READ: Australia wins second Bangladesh Test, levels series 1-1

Bangladesh top-order collapses: Winning the toss, Bangladesh had elected to bat but failed to get a solid start. Thanks to Nathan Lyon who ran through the line-up, Australia reduced Bangladesh to 117 for 5, with key players like Tamim Iqbal and Shakib Al Hasan sent back.

Mushfiqur Rahim, Sabbir Rahman hold fort: Mushfiqur and Sabbir defied a rampant Nathan Lyon after the collapse. They added 105 to revive Bangladesh and take the score past 200. They were the only ones to go past fifty for Bangladesh in the Test.

Bangladesh collapse, yet again: Unfortunately, Bangladesh failed again. The Australia spinners, led by Lyon, reduced them to 43 for 5. They never recovered as Lyon ran through again to restrict the target to 86. Mushfiqur s 31 was the highest score of the innings.

Nathan Lyon s exceptional spell: Lyon alone took 13 Bangladesh wickets in the Test 7 in the first innings and 6 in the third. He became the first Australian spinner since Shane Warne (in 2004) to bag 5-wicket hauls in three consecutive innings. His 22 wickets in the series are also the joint second-most for any bowler in a two-Test series, after Rangana Herath. Lyon now has 46 wickets from 6 Tests in 2017, the most for any bowler. He also became the fourth-most successful visiting Test bowler in Asia with 81 wickets, after Shane Warne (127), Daniel Vettori (98) and Dale Steyn (90). He also went past Jason Gillespie in the list of most successful Test bowlers for Australia. 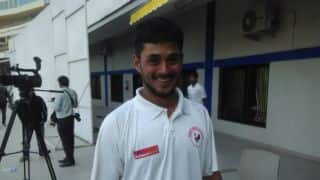 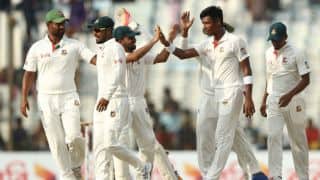