Bangladesh vs England: Ian Bell should be given what he deserves

Bangladesh vs England: Ian Bell should be given what he deserves

With middle-order crisis daunting England side, it is a quite surprising how the management is being dicey over the inclusion of batsmen like Ian Bell who has the thing England need at this time

England’s Test side is facing some serious middle-order batting issues since a long time, alongside their failure in finding a stable opening partner for Alastair Cook. England have not been able to find consistent batsmen who could handle the pressure if the top order does not perform well. England have tried some variation in their batting line-up by including some young players. But these variations did not go well for them as none of their new batsmen have cemented their place by displaying good performances in the recent past. With England scheduled for a winter tour to Bangladesh which is followed up by tour to India, the team needs some reliable batsmen who have the experience of playing in subcontinental conditions. FULL CRICKET SCORECARD: Live Score England Vs Pakistan 2nd ODI at Lords

With the likes of Gary Ballance, James Vince and even opener Alex Hales not performing up to the mark, England need a player who can support their team in times of worry and also who has the experience of playing in Asian conditions as wickets will be entirely different. For them to put up a challenge against the Asian teams, it is necessary that their squad has a proper balance of young as well as experienced players as well. Given this aspect, Ian Bell can look like a perfect inclusion in the inconsistent batting line-up as he has the experience which the Test squad needs right now.

The last time Bell played for England was back in November 2015 against Pakistan, where he scored 40 off 217 balls in first innings while in second he did not even open his account. Bell scored total 158 runs in that series which comprised of three Tests against Pakistan which was played in Dubai as a neutral venue. England went on to lose that series 0-2 as Pakistan won the consecutive second and third Test after the first resulted in a draw. Moreover, Bell has played total 118 Tests for England and has scored 7,727 runs and has a decent average of 42.69.

Irrespective of these stats, Bell has been on the sidelines for almost 10 months now. It was not until now that when England are scheduled for winter Test tours to Bangladesh and India, England head coach Trevor Bayliss has thought of calling Bell back into the squad. This decision has come up after Compton, Ballance, Hales and Vince struggled to confirm their position in the side. With middle-order problems having consistently troubled the management, who in return kept backing the young blood, Bell’s 118 Test caps and 11 years of international experience could yet see him win a place for the tours to Bangladesh and India.

Ballance has an average of 25.77 in his past nine innings of the last five Tests while Vince has scored at an embarrassing 18.66 in same number of innings. Comparing the First-Class average for these two players, Ballance has an average of 50; Vince has average of 45.6 from past five innings thanks to his century against Yorkshire. Also, the form of Hales was in Tests. If atrocious batting performance was not all, Hales had the gumption to storm into the third umpire’s room to protest against a dismissal Pakistan. ALSO READ: Virat Kohli is batsman who I respect and admire, says Sami Aslam

These players did prove their credentials in First-Class but have failed miserably to do the same at international level. What is more shocking is that irrespective of these numbers, both Ballance and Vince both have played in the entire Test series against Pakistan.

So what numbers are England looking for? Throughout the series against Pakistan, England’s middle-order was consistent in inconsistency and eventually the pressure would mount on Moeen Ali and Jonny Bairtsow, who did commendable jobs for their team. But if young players are not performing well, the time arrives for them to be set back to their respective domestic sides and demand runs.

Bell has made decent amount of runs this season, having scored one hundred in 16 First-Class innings, but with 7,727 Test runs and 22 centuries there is a ray of hope that he can stand for his team in time of crisis. It will be completely absurd to keep a player of Bell’s caliber out of squad just because he is 34-years-old. With the team struggling with new players, it is important for England to have someone like Bell in the batting order who can act as a spine for the batting order.

But in between all this, Naseer Hussain recently gave a statement saying England would take a back step if they include Bell for the upcoming series against Bangladesh and India. Hussain has insisted England to go for new players and not for someone like Bell as he has not played for England for almost 10 months. But given the backdrop of England’s middle order’s struggle to build significant scores consistently has been a major concern. Bell’s exclusion from the team was saw youngsters getting into the squad. Irrespective of this Bell has been in steady form for Warwickshire, averaging 37.14 in Division One.

Accodring to Cricbuzz, Hussain stated, “There is no doubting Ian Bell’s class and his record in the sub-continent — I think he averages over 40 in the sub-continent. But he didn’t have a good time of it in the UAE recently and that is why he was left out. I would personally like to look to the future, especially with the tour of Bangladesh. I don’t see the mileage of taking Bell, albeit a fantastic player, so I would look to the future. But they have gone for a couple of players like Vince who haven’t done much and might want that consistent solidity that Ian Bell would bring.”

Hussain who voiced his reluctance over the thought of inclusion of Bell in the squad is the same person who had asked England T20I skipper Eoin Morgan if he would include Kevin Pietersen for the ICC T20 World Cup 2016 given the form the right-hander maverick cricketer displayed in Big Bash League (BBL). Pietersen is 36-years-old but still Hussain wanted him to be in the T20I squad whereas Bell who is two years younger to him should not be included in the squad of Test series. What logic was Hussain applying when he said England would take a back step with Bell’s inclusion in the squad?

England’s dependence on Cook and Joe Root is crossing limits. Cook has lacked a opening partner and eventually pressure has mounted on his shoulders which is why he too has sufficed under it. If England want to put up a decent challenge against Bangladesh and India, they need to make sure that they do not repeat their mistakes which they did in their own country. They need cricketers who have played in such conditions and this is where the experience factor comes into play. 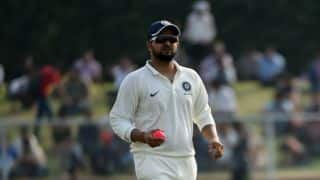