Bangladesh beat Pakistan by five wickets and qualified for the final of the Asia Cup T20 2016 where they will face India this Sunday.

Bangladesh beat Pakistan by five wickets and qualified for the final of the Asia Cup T20 2016 where they will face India this Sunday. It was a match that they dominated right from the beginning. They were on top when they bowled, and later, when they chased the target down without a lot of difficulties. This is the second time Bangladesh have qualified for the final of  the Asia Cup, having made it to the final in 2012 and narrowly losing out to Pakistan. Bangladesh will look to avenge the defeat they suffered in the first match against India in the final. Pramod Ananth looks back at the highlights of the match. FULL CRICKET SCORECARD: Bangladesh vs Pakistan, Asia Cup T20 2016, Match 8 at Dhaka

Introduction of Arafat Sunny early: Mashrafe Mortaza is known to be innovative with his captaincy and this match it was no different. He introduced left-arm spinner Sunny in the fourth over, which was a bit of a surprise as Al-Amin Hossain had just picked up a wicket in his previous over. Sunny repaid Mortaza’s faith as he picked up the wicket of Sharjeel Khan in that over.

Poor umpiring: Umpiring blunders have been a highlight of the tournament, and this match was no different. In the first innings, Mohammad Hafeez was adjudged leg-before off Mortaza when the ball was clearly sliding down leg. In the Bangladesh innings, Mushfiqur Rahim was given out LBW off Shoaib Malik, despite the fact that the ball marginally pitched outside leg. Shahid Afridi: Want to congratulate India, Bangladesh for qualifying for Asia Cup T20 2016 final

Sarfraz Ahmed-Shoaib Malik partnership: Sarfraz was promoted to No. 4, ahead of Umar Akmal and Malik. He justified that with a brilliant unbeaten 58. He put on 70 with Malik for the fifth wicket, which not only brought Pakistan back in the game, but gave them a chance to post a fighting total on the board.

The Mohammad Aamer show: Aamer has been Pakistan’s best player in this tournament, and he was no different today. He made an impact whenever the captain asked him to. When things became tight towards the end, he knocked over Soumya Sarkar and Shakib Al Hasan at crucial junctures. Aamer finished with figures of 2 for 26.

Soumya Sarkar’s return to form: Sarkar had just made 32 in 3 innings before this match, but managed to strike a majestic 48 opening the innings to guide his side home. He was cautious in the initial stages, but once he got his eye in there was no stopping him. He targeted all the bowlers, especially Anwar Ali, but fell to an excellent delivery from Aamer.

Mohammad Sami’s no-balls: Sami’s 19th over eventually cost Pakistan the match. He was entrusted to bowl the penultimate over of the match, with Bangladesh needing 18 off 12. Aamer had just dismissed Shakib in the previous over and Pakistan certainly had the momentum. After giving away just three singles off his first three deliveries, Sami overstepped; to add to his misfortune, the ball was caught at long-off. He overstepped once again in the final ball of the over and to make things worse Mahmudullah hit a boundary off it. Bangladesh needed just 3 to win off the final over, which they finished off in the first ball of the 20th over itself. 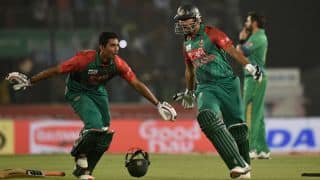