The first match at Dambulla saw complete domination by the Bangla Tigers over their adversaries in Lankan Lions by a massive margin of 90 runs.

Bangladesh, fresh from their accomplishment in the Test arena, were eyeing yet another successful outing against Sri Lanka in the One-Day International (ODI) series. The first match at Dambulla saw complete domination by the Bangla Tigers over their adversaries in Lankan Lions by a massive margin of 90 runs. This win brought up only their second win against Sri Lanka in the opponents backyard in 50-overs cricket. The match was replete with key highlights that included some terrific batsmanship, astute bowling and some very clever tactics. Let us take a look:

Sabbir Rahman s onslaught: Sabbir has arguably been Bangladesh s best limited-overs batsman in the past year, and he continued to prove so. Sabbir, who started off slowly, went on a rampage against Thisara Perera, who got hammered for three boundaries in the same over (all through the offside). He ensured Tamim Iqbal could play according to his own pace and not eye quick runs, taking the pressure off the batting mainstay s shoulders. Sabbir took a particular liking to the sweep shot, displaying it at every chance he got against the Sri Lankan spinners. Sabbir made a 56-ball 54 that included 10 fours. FULL CRICKET SCORECARD: Bangladesh vs Sri Lanka 1st ODI at Dambulla

Tamim Iqbal s statesman-like hundred: The mainstay of the Bangladeshi batting line-up, Tamim returned to form with a sturdy century. With wickets tumbling around him, Tamim refrained from going the aerial route and relied only on grounded shots that saw him reach his 10,000th international run. Tamim s stay in the middle enabled players like Sabbir and Shakib Al Hasan to play with freedom and keep Bangladesh ahead in the contest.

Tamim cashed in on good batting conditions and went on to score a resounding hundred for his side; his eighth in ODIs. His innings ended on 127 off 142 balls.

Shakib Al Hasan s quick-fire 72: Test cricket s No. 1 all-rounder, Shakib Al Hasan dazzled his way to an eye-catching half-century. Starting slowly and being cautious early on, Shakib took the charge from his partner Tamim and dashed his way to runs. He swept, muscled and lofted the ball over the boundary line after crossing his personal milestone.

Mashrafe Mortaza s measly spell: Having set a record target to win, Bangladesh skipper Mortaza displayed accuracy and control in his opening spell. It only took three balls for him to nab his first victim of the day. Mortaza used the length and breadth of the crease to perfection to strangle the flow of runs from his end.

His first two overs were maidens, one of which brought him a wicket marking a terrific start for the visiting side.

Mortaza s spell lasted for five overs (12 runs) that saw him beat edges on multiple occasions, what was hearting to see that he invited batsmen on the front and hardly ever did give an inch to them.

Dinesh Chandimal s robust fifty: Despite being not in form, Chandimal applied himself in the middle and stitched up a face-saving partnership with Asela Gunaratne. Chandimal played and missed on regular basis en route his half-century, which could be compared to former England player Jonathan Trott s style of batting.

It was slow and did not do much for the teams cause apart from extending the evitable. Nonetheless, Chandimal brought up his 21st ODI half-century in 62 balls. 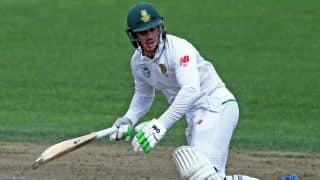