Both teams will now want to play out the second ODI with much more intensity making this a crackerjack of a contest.

Bangladesh s inspiring Test win at Colombo was followed by another impressive performance in the first One-Day International (ODI) at Dambulla. Playing in the first of the three-ODI series, both sides collided at the Rangiri Dambulla International Stadium that saw Bangladesh routing Sri Lanka by 90 runs. Mashrafe Mortaza s side showed all-round cricketing skills against an underwhelming home side. The Upul Tharanga-led team completely looked out of form for a side that defeated Australia in their backyard. Both teams will now want to play out the second ODI with much more intensity making this a crackerjack of a contest. Let us have look into how the teams might look going ahead in the second game. LIVE CRICKET SCORECARD: Bangladesh vs Sri Lanka 2nd ODI at Dambulla

Top Order: Bangladesh s top order looks settled and raring to go with Tamim Iqbal and Sabbir Rahman in good touch. Tamim constructed a match-winning hundred, while Sabbir led charge with some fierceness. Souyma Sarkar will be expected to make good use of this chance to cement his place in the side.

Sri Lanka, meanwhile will want a turn-around. Tharanga will be a key player with all his experience. Niroshan Dickwella, having served his two-match ban, is likely to return in the place of Danushka Gunathilaka. Another player who would want a better time in the middle will be Kusal Mendis, who is having a poor time with bat.

Middle order: Bangladesh holds a clear edge in this department over their opponents. Mushfiqur Rahim, Shakib Al Hasan and Mahmudullah make it a fearful middle-order if on-song. Apart from Rahim, both Shakib and Mahmudullah displayed their exploits with the bat to near perfection in the first game. Rahim s ability to be calm and composed in the middle will be of premium in a crucial tie like this. Mosaddek Hossain s small but eye-catching cameo was a delight in the last match.

Sri Lanka s middle order has often been jigged around in the past one year. Asela Gunaratne will be under the scanner after his heroics against Australia. Dinesh Chandimal finally came into some form in the last match and would be eager to build up on the momentum. Milinda Siriwardana, who came in for the injured Kusal Perera, would want to make the No. 5 spot his own with a good show. Sachith Pathirana showed how well he can handle pressure in the first ODI will want to keep his form going.

Lower order: Skipper Mortaza led from the front in the first ODI would want his dream run going. Taskin Ahmed s pace and bounce caused panic in the eyes of their opponents. Mehedi Hasan who rocked in his first ODI will be eager to emulate his performance again. Mustafizur Rahman completes an intimidating attack even on uncooperative conditions as well.

Thisara Perera, who was punished while bowling but made it up with his batting, is likely to keep his place owning to the latter. Suranga Lakmal and Lakshan Sandakan were the only bowlers to bring some respectability to an ordinary-looking bowling card. Lahiru Kumara was thrashed for plenty going for 9 and more runs per over. Vikum Sanjaya could be given a chance in place of Kumara. 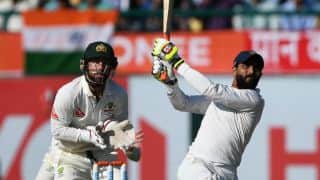