Sadly for fans, no further play was possible as rains wrecked havoc over Dambulla time and again the whole evening.

The second One-Day International (ODI) between Bangladesh and Sri Lanka was washed out due to continuous downpour. Batting first, the home side put on a mammoth 312-run target for the visitors when rains came spurting in at Dambulla. However, it saw a few milestones being achieved for the first time. Kusal Mendis accomplished his maiden ODI ton, while Taskin Ahmed took his first ODI hat-trick. Upul Tharanga will also remember this match, as this was his 200th international ODI. Despite the match being called off, it had quite a few highlights. FULL CRICKET SCORECARD: Bangladesh vs Sri Lanka 2nd ODI at Dambulla

Upul Tharanga and Kusal Mendis s 111-run stand: Unlike the first ODI, where both batsmen got out cheaply, Tharanga and Kusal ensured Sri Lanka did not suffer a collapse. Tharanga, in particular, was on the money from ball one. Kusal, on the other end, looked rusty and nervy. Tharanga exhibited his trademark drives and cuts. The pair added 111 runs for the second wicket that saw Sri Lanka gain impetus.

Upul Tharanga s 200th ODI special: Playing in his 200th ODI for Sri Lanka, Tharanga showed no nerves in the middle. The left-hander played out a fierce spell by Mashrafe Mortaza and Mehedi Hasan in the start, then easing into his innings.

He was quick to latch on to any loose balls. His stand with Kusal enabled Sri Lanka to build up a respectable target. He recorded his 31st ODI half-century, 11th at home and 4th in Dambulla. He eventually ran himself out on 65.

Kusal Mendis s maiden ton: Out-of-form Kusal Mendis came good just when it was needed. Kusal initially took 24 balls making just 7 runs, soon went all out and made up for the slow run rate. After getting his eye in, Kusal tore into Mustafizur Rahman and Shakib Al Hasan, hitting the former for a six and a boundary en route his fifty.

With fifty under his belt, Kusal went hammer and tong on the Bangladeshi bowlers, hitting them all around the park, especially down the ground. He brought up his maiden ODI hundred in 101 balls.

Taskin Ahmed s last-over hat-trick: Bowling the last over is never an easy job. After hitting a boundary on the previous delivery, Asela Gunaratne ended up mistiming a full-length delivery straight into the hands of mid-off fielder. Taskin s second scalp was off a full toss that Suranga Lakmal could not make full use of.

It was the hat-trick ball that mattered and Taskin earned the wicket. A Waqar Younis-like toe-crushing yorker to Nuwan Pradeep capped of his first-ever ODI hat-trick.

Sadly for fans, no further play was possible as rains wrecked havoc over Dambulla time and again the whole evening. 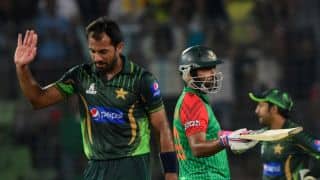