South Africa completed a 4-0 rout over the visiting Australian side. With fantastic players and phenomenal all-round strength, the Springbok cricketers were the best unit in the world. Unfortunately, they never played international cricket for over two decades.

March 10, 1970. South Africa completed a 4-0 rout over the visiting Australian side. With fantastic players and phenomenal all-round strength, the Springbok cricketers were the best unit in the world. Sadly, the next time they played Test cricket was in 1992. Arunabha Sengupta recalls the last day of glory and the events leading up to the isolation.

It ended in a comprehensive knockout. The cricket starved South African powerhouse, studded with glittering talent, steamrolled over the Australian tourists.

True, Bill Lawry’s men were not a happy bunch. Constant bickering with the management and discontent about pay-checks did not really boost the performance. However, the 4-0 rout was both unexpected and testimony to the phenomenal strength of the Springbok outfit.

Not having watched Test cricket since the 1966 tour of Bobby Simpson’s men, and with the threat of isolation hanging over their heads, crowds flocked to the ground in huge numbers. And the final Test at Port Elizabeth underlined the tale of South African dominance.

Barry Richards led the way with 81 in the first innings before running amok in a spectacular display of brimming potential in the second. The 126 in the second innings contained 16 fours and three sixes, several scintillating drives and thrilling hook shots.

The enormous all round versatility of the side was emphasised by Lee Irvine scoring a hundred and Denis Lindsay getting 43 and 60. Lindsay kept wickets, and Irvine played as a batsman. They could have as easily turned out with their roles reversed.

In the Australian first innings Peter Pollock and Mike Procter struck telling blows with the ball. In the second, the premier fast bowler of South Africa limped off the ground with a torn hamstring, unable to finish his second over — which turned out to be the last of his career. Procter knocked over six Australians and Pollock’s absence was not even felt.

Captain Ali Bacher was chaired off the ground, borne on the shoulders of the proud team. The side oozed flair, genius and confidence.

Barry Richards had scored over 500 runs in his first Test series, with stroke-play of majestic proportions. John Arlott described him as a batsman of staggering talent.

Graeme Pollock was perhaps the best batsman in the world alongside Garry Sobers — with an average over 60. Brother Peter was one of the great fast bowlers of the era with 116 Test wickets already under his belt.

Mike Procter had played 7 Tests capturing 41 wickets at just 15 apiece. He would go on to stand alongside Don Bradman and CB Fry with 6 consecutive hundreds in First-class cricket. A genuine all-rounder equally gifted in all departments.

Eddie Barlow was a fantastic batsman who could open the innings, an aggressive medium-pacer who often pleaded with his captain to have a bowl, and a slip fielder of uncanny reflexes.

Lee Irvine was coasting on a fabulous start to his Test career. Denis Lindsay was touted as the greatest batsmen among wicketkeepers since Les Ames.

Pat Trimborn had performed the role of the economic seamer to perfection, carrying on the job Trevor Goddard had done so ably all these years. And on the spinning front, a young man named John Traicos had just started to turn his off-breaks.

In 1970, man for man, this was by far the strongest side in the world.

On March 10 of that year, Bacher caught Alan Connolly off Trimborn to complete the rout. As the Springbok skipper was chaired off the ground, this great South African side walked out of the St George Park ground in Port Elizabeth and away from the international scene. The next time the nation appeared in a Test match was in April 1992. Only Traicos managed to play a few more Tests — for Zimbabwe.

As the capacity crowds cheered the victorious side through the series, even the happy stands spoke eloquently of the political situation. The spectators sat segregated according to colour, in line with the Separate Amenities Act of 1953. The cricket loving blacks turned out in large numbers, especially in Cape Town and Durban. However, it was apparent that most of them were cheering for Australia.

And all through the series, dark clouds had gathered over the forthcoming tour of England.

Clouds gather over the great side

When the Test series was taking off, the South African rugby side was going through a troubled tour of England. At every venue, the team was faced with violent anti-apartheid demonstrators. It was a harrowing experience when the team bus was hijacked on the route to the England international at Twickenham.  It became increasingly apparent that further sporting conquests would be accompanied by more and more opposition.

The Basil D’Oliveira affair had led to the cancellation of the English tour of 1968-69. The apartheid regime had refused entry to the Cape coloured all-rounder chosen in the English team. Naturally, there had been a lot of disquiet surrounding the return tour scheduled in 1970.

For a while, the cricket authorities tried to pretend that nothing was wrong. Yet, the rest of the sporting world was not untouched by the political situation. The first flutter was caused when Kenya cancelled a visit by the Marylebone Cricket Club (MCC), stating that it would not host a club that welcomed sides from South Africa. On the same day it was discovered that agitators had poured weed-killer over the outfield at Worcester, the venue of the first match of the touring South Africans.

By the end of January, as many as twelve county grounds had been vandalised by protesters.

And all the while, the South African saga of discrimination had continued. Arthur Ashe, the 1968 US Open tennis champion, was refused entry into South Africa because of his colour. On January 30, the International Cavaliers, a touring multi-racial side consisting of leading cricketers playing for charity, had been refused entry into the nation.

With time frozen still in its premises since the days of the Empire, the Long Room at Lord’s distanced itself from the International Cavaliers, stating that it was a private club. But, the rest of the world was not very amused by this apparent apathy towards the sentiments of the times.

Buckling under increasing pressure, the MCC cut the itinerary from 28 down to 11 matches, slashing away encounters scheduled in grounds potentially prone to protests. In fact, the perennially archaic authorities were flirting with cutting edge innovation. Artificial pitches were approved to counter the vandalism. The Lord’s square was by now surrounded by a protective barbed-wire fence.

After the rout of Australia had been completed, John Arlott announced that he would not go on air for the forthcoming South African visit. The master commentator was hugely popular in South Africa and had enjoyed his time in the country. At the same time he was vehemently against apartheid. Once he had put down ‘human’ as his ethnicity in his immigration form at a South African airport. It was largely due to his efforts that D’Oliviera had managed to eke out a career as a cricketer in England.

Other journalists soon followed suit, many of them splashing newspapers and magazines with stinging criticism of the MCC.

The most telling blow came in April, when Prime Minister Harold Wilson told BBC that MCC had made a big mistake in allowing the tour to go ahead: “Everyone should be free to demonstrate against apartheid. I hope people will feel free to do so.”

Towards the second half of April, eight African countries lodged a combined statement, refusing to participate in that summer’s Commonwealth Games in Edinburgh if the Test series went ahead. And soon they were joined by India, Guyana and Jamaica.

In spite of the developments, in early May MCC stubbornly announced that the tour would commence as scheduled. As a reaction, sodium chlorate was sprinkled on the wicket at Gloucestershire’s county ground. There was no tour match scheduled to be played there. Supposedly it was done because the county team contained all-rounder Mike Procter as one of their overseas players.

Warwickshire declared that they would not pick any of their three coloured players, Rohan Kanhai, Lance Gibbs and Khalid Ibadulla, for the match against the South Africans. The next day the gates at Edgbaston were vandalised.

With security becoming an issue, major hotels refused to entertain bookings for the visiting team. Hundreds of British policemen also voiced their refusal to protect venues from protesters.

The action was slated to get underway on June 1. On May 20, the Cricket Council, later International Cricket Council, almost unanimously voted in favour of the tour. Secretary Billy Griffith said: “It was agreed in the long term this policy was in the best interests of cricket, and of cricketers of all races in South Africa.”The caveat included to pacify negative feeling was that there would be no further series involving the nation “until South African cricket is played and teams selected on a multi-racial basis”.

This failed miserably to appease the anti-apartheid protestors. Daily Mirror was scathing in its verdict: “The rulers of cricket stonewall on. If this is their last word, they are assuming a terrible responsibility.”

It was politics which had the last laugh. Wilson’s Labour government could not risk negative publicity with the general election just a month away. There were also fears it would trigger racial unrest within the country.

The British Home Secretary sent across a strongly worded message to Cricket Council, ‘requesting’ the tour to be called off. The Council announced the cancellation with deep regret, apologising for the discourtesy to the South African Board.

One and a half years ago, when D’Oliveira had been selected in the English side, South African Prime Minister had called it ‘the team of the Anti-Apartheid movement.’ Now, after the cancellation of the tour, he did not mince his words: “For a government to submit so easily and so willingly to open blackmail is to me unbelievable.”

However, Bacher, who had led his side to the 4-0 win just two months earlier, made a statement at once bold and understated: “I regret the manner in which politics have become involved in cricket… [but] unless we broaden our outlook we will remain forever in isolation.”

There were several South African cricketers who felt strongly about apartheid as well.

In 1971, Barry Richards and Mike Procter organised a sterling demonstration. During a match to celebrate the tenth anniversary of the formation of the Republic of South Africa in 1971, players from both teams, including Procter, Richards and the Pollock brothers walked off after just one ball, issuing a joint statement: “We cricketers feel that the time has come for an expression of our views. We fully support the South African Cricket Association’s application to invite non-whites to tour Australia, if they are good enough, and further subscribe to merit being the only criterion on the cricket field.” 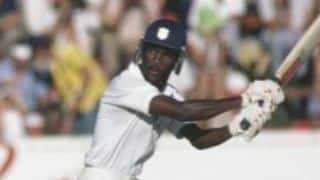 Shikhar Dhawan – Another opener from Delhi