BCCI become pro-technology; want to include robots in Indian team for fourth Test

BCCI become pro-technology; want to include robots in Indian team for fourth Test

With India losing the second and third Tests against England, the Board of Control for Cricket in India (BCCI) has offered to support use of technology in cricket if the International Cricket Council (ICC) allows inclusion of robots in the Indian team for the fourth Test at Nagpur. 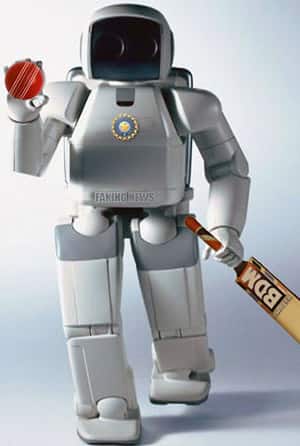 The BCCI is not anti-technology. The Indian board wants to field robots that would try to make sure India doesn t lose another Test match at home.

With India losing the second and third Tests against England, the Board of Control for Cricket in India (BCCI) has offered to support use of technology in cricket if the International Cricket Council (ICC) allows inclusion of robots in the Indian team for the fourth Test at Nagpur.

“We decided to change our stance once Gautam Gambhir was declared not out after TV replays showed that he had not nicked a ball that was caught cleanly,” BCCI President N Srinivasan told Faking News, “We realised that technology helps. However, Gambhir was out soon thereafter and we knew that we needed more than just DRS to benefit from use of technology.”

After an emergency round of discussions with Pepsi Co., the new sponsor of the Indian Premier League (IPL) and thus a vital stakeholder in Indian cricket, the BCCI decided to support technology on the condition that the ICC allowed at least four robots to play for India in the fourth and the final Test match against England.

“Two spinners and two attacking batsmen,” Srinivasan explained the roles of the robots that would counter the likes of Graeme Swann, Monty Panesar, Kevin Pietersen and Alastair Cook, and make the Nagpur match evenly contested.

The idea of playing robots instead of humans, most of who proved to be a disaster for team India in the last two matches, was proposed by Pepsi, which uses a robot that the company’s scientists have fitted with human taste buds for testing zero-calorie sweetener.

“We liked the idea and thought to have robots programmed to read the pitch and turn of a ball,” the BCCI president said, “The idea of playing four robots was borrowed from IPL, which allows a domestic team to play up to four foreign players.”

“If domestic team can have four foreign players, a national team should be allowed four aliens,” Srinivasan argued. “And as per the current technology, robots are the best alternative to aliens.”

Keen to get BCCI to support use technology in Tests, ICC is reported to be in a fix over the situation. However, sources say that ICC could accept the BCCI offer, mostly because they don’t have any other option.

Latest reports confirm that ICC has requested ECB (England and Wales Cricket Board) not to object if India decides to play four robots in the next match. England is reportedly cool with the idea as it can’t lose the series now.

“At worst, we will lose the Nagpur match, which means a leveled series,” an ECB official said on conditions of anonymity, “But our cricketers are hopeful that they can beat India even if they play with four robots.”

“The only condition is that none of the four robots should be the Chitti robo by Rajinikanth,” the official added.

While the ICC and ECB took a quick decision on the issue, sources say that it’s the BCCI that has got in a tangle over its own demand.

“They can’t finalise the list of four players to drop for the Nagpur match,” a source revealed, “The list is too long and too controversial.”

India needs selfless players who can go on to become the next Dravid, Laxman and Kumble