Laughlin made his First-Class debut for Queensland against Victoria in 2008 and has played for Antigua Hawksbills, Canterbury, Hobart Hurricanes, Northern Districts, Tasmania and Queensland Academy of Sport.

Ben Laughlin (left) is an Australian right-arm medium-pacer, who has played five One-Day Internationals (ODIs) and three Twenty20 Internationals (T20Is) so far, making his debut against South Africa in 2009 at Durban. In the same series, he also made his T20I debut but failed to make a mark. He along with Brett Geeves were actually called to to replace Peter Siddle and Ben Hilfenhaus, who were being rested as a safety measure before the 2009 ICC World Twenty20 and The Ashes that followed.

Laughlin made his First-Class debut for Queensland against Victoria in 2008 and has played for Antigua Hawksbills, Canterbury, Hobart Hurricanes, Northern Districts, Tasmania and Queensland Academy of Sport. In the Big Bash League (BBL), he plays for Adelaide Strikers and has been an integral part of the team.

In 2013, he was bought by Chennai Super Kings (CSK) at the 2013 IPL Player Auction for the base price of USD 20,000. Consistency and stress problems became a major factor which has kept the Australian out from the national side.

Laughlin’s doppelganger on the right is Norberto Neto or simply known as ‘Neto’, a Brazilian goalkeeper who plays for Fiorentina in the Italian Serie A. Neto started his career in 2009 for his native club Atl tico Paranaense. In 2010, he had established himself as a first-choice keeper but was forced to miss several games after being called up for the Brazil U-23 national team.

On January 8, 2011, Neto signed for Italian club Fiorentina for an undisclosed fee and is now hailed as one of the most talented shot-stoppers of modern-day football. 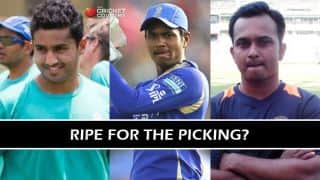