June 6, 1953. It was Bertie Buse s benefit match and there was a large crowd in at Bath to watch the Somerset-Lancashire showdown. However, the pitch ensured a financial disaster for the popular Somerset all-rounder. Arunabha Sengupta recalls the day that saw an entire First-Class match played from start to finish with 30 wickets tumbling in 82 overs.

Bertie Buse, the Bristol born Somerset all-rounder, had provided yeoman s service to the county. He had been around for 24 years, a regular for the last 15. He had the reputation of firing when the rest of the batting collapsed around him, a trait that saw him score 7 First-Class centuries. His batting was characterised by the curious dab-cut, unique in the game, a stroke of his own invention. And from a scrupulously exact and repeatable run up, his medium pace was often slightly quicker and decidedly more penetrating than the offerings of a regular county trundler.

He was immensely popular at 42 when he embarked on his final season. When not doing county duty, he played for the Bath Cricket Cub and spent the winters as a fullback for Bath RFC. So, it was no surprise that the county committee decided to give him a rousing benefit match, earmarking the Bath encounter against the fancied Lancashire side for the purpose. The star studded visiting team in Buse s adopted hometown was a sure guarantee for crowds to stream in.

The Bath Recreation Ground would no doubt fill up. The one nagging feature was the dicey wicket that had dogged the games in the past few seasons. But, constant complaints had induced the groundsmen to relay the pitch.

Everything should have gone according to plan. However, there were two hitches. The preceding winter had been cruelly cold. Icy winds had blown across the turf, and the growth of grass had been stunted. This had been compounded by the Coronation Day celebrations held on the ground just a couple of weeks before the game.

All in a day s work

The Lancashire team, led by England opener Cyril Washbrook and consisting of players like Jack Ikin, Brian Statham and Roy Tattersall, arrived at Bath to find a dry, grassless surface. There was a tinge of green but on closer inspection that turned out to be a film of dried moss. The pitch also had a fair proportion of acorn and gravel.

Ben Brocklehurst, the home captain, won the toss and elected to bat. The temperamental genius Harold Gimblett ran himself out for a duck. And after that it was all Tattersall.

The off-spinner with his high arm action just had to pitch on a length. The pitch then took over, imparting mystery and vagaries to the deliveries. Buse, the beneficiary, found himself walking out at 17 for 3, and managed just 5. In fact, none of the home batsmen reached double figures, wicketkeeper Harold Stephenson top-scoring with 8. The innings lasted just one-and-a-half-hours and amounted to 55. Tattershall ended with figures of 12.4-4-25-7.

By lunch however, the balance had been partly restored. Buse opened the bowling and captured the first 4 wickets, including the big ones of Washbrook and Ikin. Lancashire went into the break at 46 for 5. However, even with the success under his belt, Buse must have felt wretched and betrayed as he went in to the pavilion. It was absolutely obvious that the match would not last too long. It was turning out to be a disaster as a benefit game.

After lunch, Lancashire changed their approach. Peter Marner and Alan Wharton launched into a stinging counter attack. Marner, thickset, powerful and just 17-years-old, cleared the boundary four times, plundering 18 runs off 4 balls from Buse. The pair added 70 in just 25 minutes, effectively deciding the match. Jim Redman accounted for both of them within 1 run of each other and Buse picked up 2 more wickets to finish with 6 for 41, but the visitors totalled 158, which meant a 103 run lead.

When Somerset batted again, Statham joined the party, removing Johnny Lawrence and Roy Smith for ducks. Soon the home side were 7 for 4. Tattershall tore through the batting once again, picking up 6 wickets this time dismissing Buse for 3. Stephenson scored 14, launching Tattershall for a six during a brief cameo. The extras trickled over to 10, and some late order heroics by Redman saw him score 27 not out. Those were the only double figure scores on a pitch that was by now assuming demonic proportions. The 35 runs Redman added with Brian Langford for the last wicket turned out to be the best partnership of the match for the hosts.

At 5:35, 45 minutes before the scheduled close of the first day s play, Tattershall bowled Langford to bring an end to the proceedings and a victory by an innings and 24 runs for Lancashire.

The benefit match had bombed as far as Buse was concerned. According to the rules of the day, the beneficiary had to bear the costs of the match while getting the gate money. To their credit, the Somerset committee waived the costs and set up a fund to help the stalwart. Ultimately Buse was handed a fairly impressive amount of 2,800.

After the match, the Somerset committee held a meeting and decided to move their following fixture against Kent to Taunton. However, the incidental expenditures of the sudden shift were too much to bear. Hence, the groundsmen were ordered to repair the pitch at express speed.

Cecil Buttle, the head groundsman, opted for the policy of pouring a mixture of liquid marl and cow manure over the pitch with a watering can. He then suppressed this ingenious tampering by rolling the pitch with a covering of cut grass.

However, in spite of all this effort,the match against Kent began with Somerset bundled for 123 following which the visitors ended the first day on 153 for 8. It had been slightly better than the Lancashire match, but only just.

On the second day, though, normal cricket was finally resumed. Gimblett hit 146 and Buse, in at No. 4, scored his final First-Class hundred. Somerset ended the second day at 416 for 8 and went on to win by 153 runs. 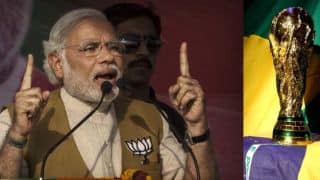 Kumar Sangakkara, Kaushal Silva take Sri Lanka to 99/1 against England at Lunch on Day 5 of 1st Test at Lord’s