Bill O’Reilly, born December 20, 1905, was considered by Don Bradman to be the greatest bowler he had faced or seen. Arunabha Sengupta recalls the immortal character who bowled leg-spin with the spirit of a fast bowler.

In his Farewell to Cricket, Don Bradman devoted a substantial section to dwell on the bowling of Bill O’Reilly. It was titled “The Daddy of them all.”

Not too many men hovering in and around the cricket world disputed the great man’s opinion. O’Reilly indeed was the greatest bowler of his time.

In the 1930s, the wickets were made to order for batsmen to pile up enormous scores. These were the shirtfront, concrete-hard pitches which remained benign and true with the days that passed. For Test matches were often timeless, played to the finish. And yet, on these tracks, as batsmen batted armed with the license of eternity, O’Reilly ran in and conquered them.

He stood six feet two inches in his socks. His prematurely-balding crown glistened with sweat of the brow, because for him leg-spin was not an art of leisure. He gripped the ball in his huge right hand, and ran in to hurl down the leg-breaks, googlies and top-spinners at a pace that can be called fast-medium. Often balls would bounce to heights unknown to spinners. And as he followed through, with the scowl making it clear that he hated the very guts of the batsman, wicketkeepers of the day often got knocked off their feet. Nature had intended to make a fast bowler, but glitch in the process had produced a demon leg-spinner. Not for nothing was he called ‘Tiger’.

His action, described by his close friend and teammate Jack Fingleton, was a flurry of limbs, fire and steel-edged temper. Some suggested that the fury that accompanied his deliveries rose from the frustrations that he could not knock the batsmen over. His point of delivery, after the whirling of the arms, was unusually low, making it difficult for the batsman to read the flight of the ball.

He hated batsmen. Ian Peebles, wrote about him “any scoring-stroke was greeted by a testy demand for the immediate return of the ball rather than a congratulatory word. Full well did he deserve his sobriquet of ‘Tiger’.”

RC Robertson-Glasgow described his action more colourfully: “As with those more florid opponents of legendary heroes, there seemed to be more arms than Nature or the rules allow. During the run-up, a sort of fierce galumph, the right forearm worked like a piston; at delivery the head was ducked low as if to butt the batsman on to his stumps. But it didn’t take long to see the greatness; the control of leg-break, top-spinner and googly; the change of pace and trajectory without apparent change in action; the scrupulous length; the vitality; and, informing and rounding all, the brain to diagnose what patient required what treatment.”

Marking his run up

Born in White Cliffs, New South Wales, to a family of Irish immigrants, O’Reilly played cricket with his three brothers with a gum-wood bat and a piece of banksia root carved into a ball. Being the youngest of the lot probably laid the foundations of his later temper on the field and scripted his future as well. His elder brothers kept him bowling much longer than he was allowed to bat.

When he played his first match for Wingello Juniors, the team walked seven miles to the opposition’s ground in Tallong, with their dogs chasing rabbits along the way.

In college, he was an athlete of some talent, holding the state record for hop, step and jump. Fingleton wrote that unless he had been asked to make up the numbers in a Sydney junior match, he could have remained uninitiated to the world of cricket. In that match he bowled with an action and line that had the spectators in splits, but like many of his future opponents, the batsmen collapsed to defeat.

In the summer of 1925-26, O’Reilly was an undergraduate at the teacher’s college in Sydney University. Passing through the Bowral Station on his way home to Wingello, he met his townsmen who were there to play Bowral in a festival match. He was coaxed to turn his arm over for them.

O’Reilly wrote in his biography 60 Years of Cricket : “How was I to know that I was about to cross swords with the greatest cricketer that ever set foot on a cricket field ? He didn’t have it all his own way, let me tell you. Well, not for the first couple of overs, anyway.” At the end of the day, 17-year-old Don Bradman was 234 not out.

However, when the match resumed — as per the custom — a week later, “The sun shone, the birds sang sweetly and the flowers bloomed as never before. I bowled him first ball with a leg-break which came from the leg stump to hit the off bail. Suddenly cricket was the best game in the whole wide world.”

That was the first meeting with the man with whom he would forever share a tempestuous relationship.

O’Reilly soon made his First-Class debut for New South Wales against New Zealand, taking three wickets in the match. Sent to three different bush towns in his teaching duties, he perhaps missed the chance of playing in the home series against England, in which Bradman made his debut. He could have made it to the 1930 tour of England as well if his occupation had not intervened.

However, he did obtain a transfer to Sydney in late 1931, and made his Test debut against South Africa at Adelaide. In the match fellow leg-spinner Clarrie Grimmett skittled out 14 batsmen, Bradman was stranded at the end of the Australian first innings at 299 not out, and the home team won by 10 wickets. O’Reilly picked up four wickets.

The first of his four Ashes series happened to be the infamous Bodyline affair. And while the fast short-pitched stuff of Harold Larwood and Bill Voce usurped the limelight, O’Reilly quietly picked up 27 wickets in the series. Much of it went unnoticed, but with 363 eight-ball overs in the series, he had underlined his immense merit.

When Australia toured England in the summer of 1934, he did even better, with 28 wickets in the series. At Trent Bridge he won the match with seven for 54, with “clever variation in flight and pace combined with spin off the worn turf.” Under the tyrannical Old Trafford sun, in the space of an over, he had Cyril Walters caught at forward short leg off the first ball, knocked back Bob Wyatt’s middle stump with his second, and had  Wally Hammond bowled by the fourth.

However, after his return from the hugely successful tour, he suddenly announced his retirement — in a bid to support his wife and young daughter with a steady teaching job.

Cricket will forever be indebted to the Sydney Grammar School which offered him the ideal kind job to continue playing for Australia. His next series in South Africa brought him 27 wickets. 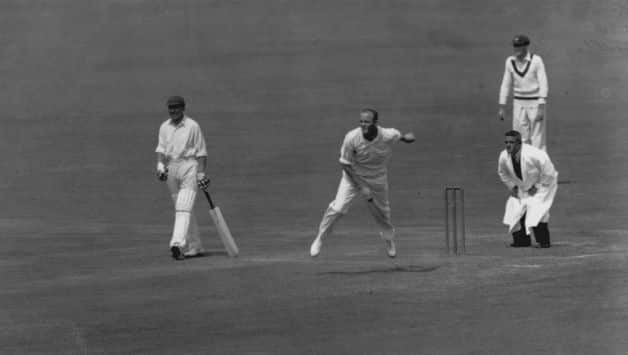 The following Ashes series was one of the best of all time. This was the tour which Neville Cardus documented in the book Australian Summer and Australia came back from a 0-2 deficit to win 3-2.

The tour had a fractious start in the Australian camp. With Bradman recently appointed captain, O’Reilly’s long time bowling partner Grimmett was omitted from the side. Throughout the tour, O’Reilly maintained that it was a heavy blow to Australian bowling.

Before his death, in an interview, O’Reilly accused Bradman of removing Grimmett from the team. Apparently, his fellow leg-spinner had paid the price of some frivolous comments about Bradman ensuring his own dismissal in a match against Victoria to avoid facing the express pace of Ernie McCormick.This was neither the first nor the last of O’Reilly’s run-ins with the great batsman.

In spite of the differences, O’Reilly did pick up 25 wickets in the series, including 5 in the first innings and 3 in the second of the decisive Adelaide Test.

On the tour of England in 1938, O’Reilly claimed that the wickets “dosed up to the eyeballs.” Bowling was a backbreaking ordeal as tons and tons of runs were plundered. But, O’Reilly continued to sprint in and hurl down his leg-breaks, picking up 22 wickets in the series. Even when England piled up 903 for 7 at The Oval, O’Reilly refused to be dominated. His figures read 3 for 178 from 85 overs. At Leeds, he won the Test for Australia with 5 wickets in each innings.

The Second World War intervened now, and practically brought an end to this glorious career.

After the War, O’Reilly played just one more Test. Over 40, he took 5 for 14 and 3 for 19 against an inexperienced New Zealand side. At the end of the match, he retired, marking the occasion by throwing his boots out of the dressing-room window.

In his career, O’Reilly captured 144 wickets in 27 Tests at 22.59 — a remarkable average for a spinner. His figures seem miraculous when we consider the batsman friendly conditions of the 1930s. His tally included 102 against England in four glorious Ashes series, accounting for the prize wicket of Wally Hammond ten times.

The problems with Bradman

After his playing days, O’Reilly began writing on cricket for the Sydney Morning Herald. His prose was witty, versatile and almost dripping with Australian flavour. “You can smell the gum-leaves off him,” was his description of a new Queensland cricketer coming in from the country. Respected as a pressman, he openly attacked selectors in his frank opinions, especially when they committed the cardinal sin of leaving out a promising leg-spinner.

To his last day he remained impetuous and full of humour.

When O’Reilly became a journalist, he joined his former teammate Jack Fingleton in the press box. The two became known for their biting criticism of Don Bradman. When Bradman was famously bowled for a duck in his final Test innings, the two were reported to have become hysterical with laughter 21122 much to the annoyance of Neville Cardus.

The differences between O’Reilly and Bradman had their roots in religion. Sectarian tension existed in the Australian team of the 30s, between the Catholics like O’Reilly, Fingleton and Stan McCabe, and Protestants like Bradman. Also, O’Reilly’s earthy camaraderie, love for a beer and sense of humour jarred with the tee-totalling, austere Bradman.

In 1995, after both Fingleton and O’Reilly had passed away, Bradman wrote: “With these fellows out of the way, the loyalty of my 1948 side was a big joy and made a big contribution to the outstanding success of that tour.”

On his part, after his cricketing career was over, O’Reilly complained to a board member: “You have to play under a Protestant to know what it’s like”.

Nevertheless, there was immense mutual respect between the two. While Bradman maintained that O’Reilly was the greatest bowler he had ever seen, O’Reilly kept most of his strongest feelings about Bradman to himself saying in his typical style, “You don’t piss on statues”.

A few years before his death, O’Reilly wrote that compared to Bradman, batsmen like Greg Chappell and Allan Border were mere “child’s play”.

When O’Reilly passed away in 1992, Don Bradman remarked that he was the greatest bowler he had ever faced or watched.