Billy Bowden is one man who has made umpiring entertaining.

Billy Bowden is one man who has made umpiring entertaining. Wonder what WG Grace would have told him if he had erroneously given him out! But, time and again, Bowden has entertained crowds with his idiosyncratic signs. But, on one occasion, during an Australia-West Indies one-dayer at Adelaide in 2010, Mitchell Johnson hit the batsman plumb in front, but Bowden moved across the stumps as the batsmen crossed over. He then came back to his mark and raised that crooked finger. On another occasion, during the 2006 Ashes Test at Brisbane, Bowden was hit hard by a sweep on his backside. He tried to sway away, but was hit by that ferocious shot. And, who can forget Suresh Raina mocking him as he raised a crooked finger in unison with the umpire. 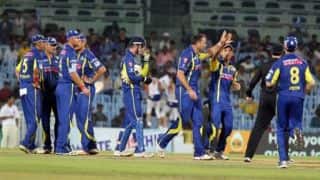