It is one of the lovely ironies of modern cricket that great cricket writers can wax lyrical about both fast and slow bowling. Whoever said Michael Holding’s bowling action was "whispering death" was perhaps a greater wordsmith than the man who described Bishan Bedi’s as "poetry in motion"; both, the speed merchant and the spin wizard tended to evoke superlatives in those who watched them in their prime. It is one of the lovely ironies of modern cricket that great cricket writers can wax lyrical about both fast and slow bowling. Whoever said Michael Holding’s bowling action was “whispering death” was perhaps a greater wordsmith than the man who described Bishan Bedi’s as “poetry in motion”; both, the speed merchant and the spin wizard tended to evoke superlatives in those who watched them in their prime.

Bedi at his best not only fitted that description perfectly, but was the most consummate exponent of the art of spin bowling — so much so that the question is often asked if he has been the greatest left-arm spinner in the history of the game. Sir Donald Bradman, who saw Bedi only at his best or close to his best, seemed to think so.

He was certainly the best left-arm spinner I saw, better than Vinoo Mankad, whom I did not have the good fortune to watch in his youth. He was more classical than the mercurial genius Salim Durrani. He was more complete, especially on good wickets, than England’s Derek Underwood, who could be destructive on certain types of pitches, the two brilliant bowlers he kept out of Test cricket — Rajinder Goel and Padmakar Shivalkar — his outstanding successor Dilip Doshi, and New Zealand’s Daniel Vettori.

Though Bedi had been impressive when I first saw him in 1967 — in his second Test and the third and last of that series at Chepauk — it wasn’t until six years later that he was to inspire awe with his total domination of the English openers when brought on within moments of the start of the innings. By now, he was a confident purveyor of his exquisite art of classical spin bowling. Twinkle-toed in his run-up, he was virtually airborne in his final stride to the wicket, looking over his right shoulder in side-on elegance. His incredible arm-speed in delivery completed the illusion of effortlessness that enabled him to slow the flight of the ball in the air but hasten it off the pitch with just the amount of finger spin he wanted.

His arm ball, especially with the shine still on, was a veritable in-swinger that could castle the bemused right-hander or find the edge of the unsuspecting left-hander. Bedi seemed to be naturally fit, with just the right strength and flexibility of muscle for a spin bowler. If EAS Prasanna was cerebral and Bhagwat Chandrasekhar intuitive, Bedi was more the artful dodger, though he too could lay an elaborate trap for a batsman when he set his mind to it. He was also the most stubborn of the Indian quartet of spinners, someone who sometimes perhaps refused to see what was good for him or his side, as events in the evening of his career suggested. 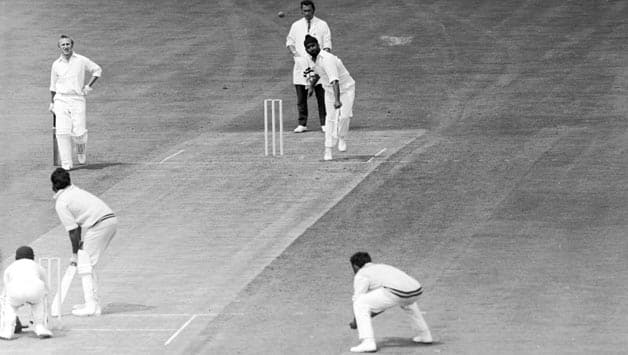 In his riveting Bishan, Portrait of a Cricketer, Suresh Menon attributes this chapter of his bowling life to Bedi’s adamant refusal to deviate from his philosophy of flight, but I have always wondered if the poet had simply lost his talent for verse by the time he arrived at that juncture of his cricketing journey.

Was it a question of loss of spinning ability and resultant absence of loop that made the previously deceptive suddenly innocuous? (Menon does hint in his empathetic yet delightfully honest book that Bishan was physically and mentally tired by the time he toured Pakistan as India captain).

Menon also says Bedi’s greatest contribution to the game after his retirement was as a coach. I tend to agree. When, during a recent personal interaction, I made bold to describe him as a guru, Bedi said he would rather be known as a cricket philosopher. That immediately brought back fond memories of another meeting with him some years ago.

When I met him, Bedi was addressing young spin bowling prospects from the Australian Cricket Academy on a visit to Chennai to train with him and Prasanna.

“Out of 24 hours, you spend six hours on the cricket field, “he asked the youngsters. “What do you do with the rest? Do you read? Go to the theatre? Listen to music? Cricket is a game that demands intellect, maturity, independent decision making ability, and all this, you cannot acquire by merely playing cricket.”

Between watching the cricket and making notes on his wards’ performance, Bedi was dipping into a book on leadership. He also found material relevant to his theme of the inter-relatedness of sport and other facets of life in a magazine article and encouraged his trainees to read it, as part of a mind-expanding exercise.

Bedi was constantly challenging the boys to think for themselves, and to articulate their views on a variety of topics. “What is the difference between joy and happiness?” he asked them, and provided the answer himself. “Imagine your father has bought you a new car for your 21st birthday. How do you feel when he hands over the keys to you? Don’t you feel joyous and excited? But what happens after a couple of months? You are still happy to drive a car, but that sense of unbridled joy will be missing, won’t it?” he asked. “Enjoy your cricket. Don’t let the joy factor disappear. That’s the key to a successful cricket career.”

Speaking on the current crisis in Indian cricket at the Nani Palkhivala Memorial Lecture at Chennai recently, Bedi stressed the core values of the game in an extempore speech surcharged with emotion, but leavened by his characteristic wit and candour. While lampooning the greed and corruption surrounding the game, he reiterated his well-known condemnation of chucking and the establishment’s hypocritical acquiescence in the whole charade of permissible degrees of deviation from the norm.

Amidst all the fire and thunder of his oratory, Bedi revealed a touching side to his personality: humility. “I was an ordinary cricketer and learned so much from my south Indian colleagues — especially Erapalli Prasanna,” he said. His sincerity was unmistakable.

(V Ramnarayan, an off-spinner who represented a powerful Hyderabad side, was among the Indian probable for the 1977-78 tour of Australia. He captured 96 wickets from 25 First-Class matches. He now writes on cricket and music besides editing Sruti, a leading monthly magazine from Chennai devoted to the performing arts. The above column first appeared in DNA)