Bloodthirsty Roy Gilchrist leads to match being called off

Bloodthirsty Roy Gilchrist leads to match being called off

Roy Gilchrist played for Crompton in the 1965 Central Lancashire League.

Roy Gilchrist, axed from the West Indies Test side due to ruthless bowling and indiscipline, had retired to the less-glamorous pastures of the Lancashire League. Then, on August 7, 1965, he exploded. Abhishek Mukherjee looks back.

Roy Gilchrist had been sent back midway from the tour of India and Pakistan in 1958-59. He sought recluse in Lancashire League. Considered by many as the fastest bowler of the era, Gilchrist was not hesitant to unleash his wrath on the hapless club cricketers. Wisden wrote: Tales of atrocity, some perhaps arising from the proverbial tendency to give a dog a bad name, continued to emerge about his violently over-reactive attitude to batsmen and his unsparing use of the bouncer.

Gilchrist played for Crompton in the 1965 Central Lancashire League. The incident took place in a home match against Radcliffe at Glebe Street, Shaw, Oldham. Crompton were bowled out for 106 in 160 minutes; M Hilton, with 6 for 34, was the wrecker-in-chief.

The innings was not eventless. B Marsh of Compton edged a ball. Radcliffe captain and wicket-keeper Derek Bickley made a dive for it. He could not reach it as Marsh stood in his way. There was an appeal, and Marsh was given out obstructing the field. The matter, however, was dead and buried. Or so everyone thought.

Bickley walked out with Bill McDonald. Gilchrist, bowling first over, did not think twice: the first ball was a beamer aimed at Bickley s head. He survived. Gilchrist did not relent, but to their credit, Bickley and McDonald hung around and managed 3 off the first over.

At the other end, P Sutcliffe conceded a solitary run: 4 runs from 2 overs.

There was another ball, and for some reason, Bickley pointed at his own chin. An umpire later called it a provocative action. Gilchrist could not take it any further: as he approached the crease, Bickley realised something was wrong; Gilchrist crossed the popping crease till he was at a distance of 18 yards.

Meanwhile, Bickley, sensing trouble, had backed away towards square-leg. Gilchrist threw the ball at Bickley with all the force he could muster. Bickley ran for dear life as the ball soared over his head.

There was no way Bickley was going back to the pitch. He summoned McDonald off the ground. The Radcliffe players stood by Bickley and refused to continue with the match (what would you have done?). Unfortunately, as per the League rules, it counted as a conceded match, and Crompton were awarded full points.

Gilchrist, and somewhat surprisingly, Bickley, were suspended for 3 matches each. Despite all that, Bickley probably never regretted his decision. At least he lived to tell the tale. 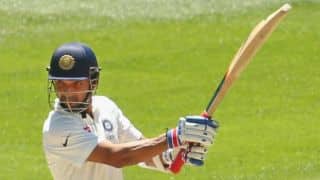 Ajinkya Rahane: Zen of a batsman Shardul Thakur: The next big product of Mumbai cricket