During his playing days, Bob Holland brought along a certain old-aged charm the keyword there being old .

Bob Holland, who passed away on September 17, 2017, was a very late bloomer in the highest form of cricket, and had a couple of spectacular highs in an unremarkable career. Arunabha Sengupta looks back at his career.

During his playing days, Bob Holland brought along a certain old-aged charm the keyword there being old .

He did not play for his state side till he was 32. That was rather late to make one s First-Class debut. And then he had to wait six more years before he was drafted into the Australian side.

When he trotted out at Brisbane against the mighty West Indian sat the age of 38, Holland became the oldest Australian debutant since Don Blackie in 1928. Amongst his relative contemporaries, Somachandra De Silva had played his first Test at the age of 40, but that had more to do with Sri Lanka getting Test status towards the fag end of his career. Among others, Holland was the oldest debutant since Miran Baksh of Pakistan had taken the field at Lahore in 1955.

It was quite a just reward for the New South Wales bowler. Playing their home matches at the spin-friendly Sydney Cricket Ground, NSW had fostered a three-pronged spin attack with left-armer Murray Bennett, off-breaking maverick Greg Matthews and the leg-spinning Holland.

And while in the initial years Holland, nicknamed Dutchie because of his name, did not quite set the SCG on fire, by the time he had captured 7 for 56 against South Australia in 1983-84, he was considered in line to replace Tom Hogan as the regular Australian spinner. His tidy length, unrestrained flight and propensity to vary things with googlies and top spinners impressed a lot of people.

A solid start to the 1984-85 season saw him selected for the Brisbane Test against the West Indians. Much of that had to do with his 7 wickets in the tour match in which New South Wales surprised the amazingly strong tourists by 71 runs.

His debut was unimpressive. While he got the wickets of Larry Gomes and Jeff Dujon, Holland was soon at the receiving end of centuries by Richie Richardson and Clive Lloyd: 2 for 97 was not really a great haul, but he was persevered with for the next Test at Adelaide. But after another two wickets at a rather costly exchange of runs, he was dropped from the side.

But he could not be ignored for long. Because in between the two Tests Holland had captured 9 for 83 in the second innings against South Australia to engineer a resounding victory for New South Wales.

Hence, he was back in the side for the final Test at Sydney, and with the West Indies 3-0 up in the series it was the moment of magic for this good-natured veteran.

Riding a masterly 173 by Kepler Wessels, Australia amassed 471 for 9 before Allan Border declared. And then Holland ran through the phenomenal Caribbean batting. Desmond Haynes, Viv Richards, Gomes and Lloyd all fell to him as he ended the innings at 163, claiming 6 for 54. As the mighty side followed on, Holland picked up 4 for 90, spinning a web around the visitors alongside state-mate Bennett. This time he accounted for Gordon Greenidge and Dujon, and his 10-for ensured an innings win.

Australia was a land which produced leg-spinning legends by the lot, with Ranji Hordern, Arthur Mailey, Clarrie Grimmett, Bill O Reilly and Richie Benaud in their history. After Benaud, however, there had been a hiatus. And although Holland was no spring chicken, this remarkable Sydney triumph kindled hopes of a revival of the leg-spinning days.

In the enthusiasm associated with the victory, Holland was drafted into the ODI side as well, but that did not work out too well. He played just two matches in this format.

Holland toured England during the 1985 Ashes. His success was once again lopsided. He captured 5 for 68 in the second innings at Lord s, but finished the tour with 6 wickets from 6 innings at 77.50.

Once back in Australia, he was taken for runs at Brisbane as Richard Hadlee bowled New Zealand to their epochal Test win.

And then the Test action was back in Sydney. And Holland was back in his element: his 6 scalps reduced the trans-Tasman neighbours to 169 for 9 before John Bracewell and Stephen Boock defied logic to add 124 for the last wicket. In the second innings Holland returned figures of 4 for 68, and the match was won by 4 wickets. Yet another 10-for in a victory.

But that was his last triumph.

He bowled reasonably well at Perth against the Kiwis but was dropped thereafter, a victim of the policy of choosing horses for courses. The hopes of an encore of his Sydney magic got him back in the side when the Indians visited. But these masters of playing wrist-spin ensured figures of 1 for 113. That was the end of his Test career.

Holland picked up 34 Test wickets at the rather high average of 39.76, and if we take 3 five-fors and 2 ten-wicket hauls in consideration that is one lopsided story.

An old-fashioned rabbit with the bat, his collection of Test runs was just one more than his wickets. His 35 runs trickled in at the average of 3.18. He reached double figures once, but stopped there, unable to go beyond 10.

The Australian spin department was transferred into the hands of men such as Matthews, Peter Sleep and Peter Taylor.

Holland carried on bowling for New South Wales, with decent success, till 1986-87, and then played a few matches for Wellington in the New Zealand circuit in the following summer.

Away from cricket Holland was a Civil Engineering Surveyor. He also spent a lot of his time volunteering as curator in a local cricket ground.

Holland was diagnosed with brain cancer in July 2017 after a tumour had been removed two months earlier. A benefit was held to help raise funds for his treatment, hosted by Mark Taylor and attended by the likes of Matthews, Bennett, Trevor Chappell and Wayne Phillips. But, he lost the battle with cancer a couple of months down the line. 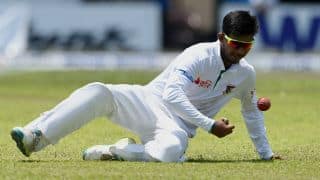 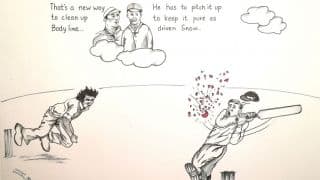