This is the story of Bobby Abel, "The Guv'nor", a truly Homeric colossus who bestrode the cricket world in the late 19th and early 20th centuries.

“Let me not then die ingloriously and without a struggle, but let me first do some great thing that shall be told among men hereafter.”

The above lines from the great Greek poet may well have been written about a man to be born much after his own time, and in a land far from his own (for geniuses transcend time and space), a man who would leave an indelible mark in the annals of cricket. This is the story of Bobby Abel, “The Guv’nor”, a truly Homeric colossus who bestrode the cricket world in the late 19th and early 20th centuries, and a man whose name is taken with the utmost reverence by cricket historians. Two 99s in a First-Class match: Amay Khurasiya and Wayne James

Abel’s statistics demarcate him as a great batsman who scored in excess of 2,000 runs for 8 continuous seasons (1895 to 1902), with a total of 3,309 runs in 1901 with 21 centuries. Not for nothing had CB Fry remarked that “He gathers runs like blackberries everywhere he goes.” Yorkshire vs Kent 1904: The match stripped of First-Class status

In this narrative, we focus on two of his outstanding batting feats. Usually batting at the top of the order, Abel carried his bat on 8 separate occasions, 2 of which were truly remarkable.

The first of the two came in the 2nd Ashes Test of 1891-92, played at the Association Ground, Sydney, billed as a ‘Timeless Test’.

Note: It may be mentioned that Henry North Holroyd, 3rd Earl of Sheffield, was a great patron of cricket and had presented the New South Wales Cricket Association with 150 in 1891 on the current tour. This amount was used to purchase a suitable plate and establish the competition we know today as the Sheffield Shield, the domestic First-Class tournament of Australia.

Wicketkeeper Jack Blackham, leading the home team, did his team the favour of winning the toss and opting for first strike. Australia, however, were dismissed for a meagre 144, one JJ Lyons top-scoring with a 56-minute 41 with 2 sixes! For England, George Lohmann took 8 for 58 (Lohmann’s 8 for 35 at the same venue in 1886-87 and his 8 for 58 in this Test, are the 2 best individual Test bowling figures ever for Sydney Tests till date). James Broadbridge given caught off a wide ball: an umpiring paradox

England replied with a healthy 307. Abel, opening the innings, carried his bat for 132 not out in 314 minutes with 11 fours, becoming the first English batsman to carry his bat in a Test match.For the home team, George Giifen, the South Australian legend, picked up 4 for 88.

Chasing 229, England were dismissed for 156, despite a good hand of 69 from Andrew Stoddart. Giffen took 6 for 72 and Charlie ‘Terror’ Turner chipped in with 4 for 46. Australia won by 72 runs, but it was Abel who won the admiration of one and all with his defining 132 not out.

It was while playing in his 461st First-Class game, for Surrey against Somerset at the Oval, London in May 1899 that Abel established a record that is unparalleled to this day. The home captain, Kingsmill Key took first strike. The stumps score on Day 1 read: Surrey 495 for 5 with opener Abel batting on 227 and Vivian Crawford on 1.

Surrey were dismissed on Day 2 for 811 in 222.2 (5-ball) overs. Abel, however, was still unvanquished on 357. This score of 357 not out for a man carrying his bat through a completed First-Class innings, has stood the test of time and is still the world record, 117 years later.It may be noted that the team had scored 811 runs while Abel was at the crease, another current record for a man opening the innings and carrying his bat.

Although Len Hutton (364) was to outscore him in later years in the famous Oval Test against Australia in 1938, he was 6th dismissed at the team score of 770 (out of the famous total of 903 for 7).

The only instance I can find from the archives of a man batting at the crease while a higher number of runs were scored by the team came in a Ranji Trophy match between Hyderabad and Andhra, played at Secunderabad in January 1994. MV Sridhar (366), No. 3 batsman for Hyderabad, had come to the crease at 30 for 1, and had been 5thout at the team score of 880, having occupied the crease while 850 runs had been added by the team.

To complete the account of the match under discussion, Somerset were all out for 234, William Trask top-scoring with 70 and Tom Richardson picking up 4 for 77. Invited to follow-on, Somerset were all out for 198. Only skipper Sammy Woods (53) put up a fight. Richardson, with 4 for 59, and William Brockwell, with 5 for 76, did the damage. Surrey won the match by an innings and 379 runs.

The match notes tell us that the 357 not out by Abel were scored 515 minutes, replete with 38 fours, an amazing 7 fives, and a six.

Abel passed away on December 10, 1936 at 79, respected by friend and foe alike, leaving behind his wondrous deeds for posterity to cherish. One can easily envision this 5’4″ Surrey giant (figuratively, of course), known in his lifetime by the respectful honorific title of “The Guv’nor” taking guard in his after life, a worthy combatant among other immortals, on the Elysian cricket fields. 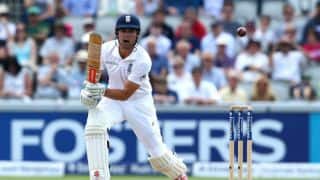