Boeta Dippenaar, the batsman who was born in the wrong era of cricket.

Only a few people know the real name of former South African batsman Boeta Dippenaar. His real name was Human Hendrik Dippenaar. His first name Boeta means “Little Brother” in Afrikaans. He had an eight-year long career playing for South Africa. He played County cricket for Leicestershire and domestic cricket for Knights. Despite a long career he struggled to stay in the side for long and retired from International Cricket in 2008 and from all forms of cricket in 2012. Dippenaar had a rather positive attitude when he bid adieu to cricket as he said, “There’s a time and place for everything in life. I’ve had a wonderful cricket career and enjoyed my time thoroughly”. ALSO READ: Clive Rice asks CSA to stay away from his funeral, says they have ‘racist approach’

Dippenaar had an ordinary average of 30.14 in his Test career. Most of the times he failed to convert starts into big scores. That is the main reason why he lagged behind in the average department. His approach towards cricket was a classical one, standing tall and driving the ball sweetly towards covers. One of the statistics shows how after playing himself in (after scoring 20 runs), he averaged a mere 52.89 despite having more than 60 per cent 20-plus scores in his Test career. ALSO READ: South Africa cricketer Boeta Dippenaar announces retirement

He did not bank much on unorthodox shots but was profoundly adept at executing proper cricketing shots. His tendency to play defencive shots on the back foot and going across the line did not do well. Most of the times, he was seen throwing his wicket away just when he was looking good and settled. He had a total of 1,718 runs in 38 Tests which featured only three centuries and seven half centuries. His career best score came against the minnows Bangladesh. His struggle against quality bowling continued throughout his career.

But Dippenaar was not a bad batsman after all. He was just born in a different era. This would be correct if said in context of ODI cricket. He scored 3,421 runs from 107 matches at an average of 42.23 featuring four centuries and half centuries. He is one of those batsmen who has a better average in international cricket instead of First Class cricket. The number of half centuries shows that Dippenaar did not succeed in converting starts into big scores.

But the main concern in his ODI career was not his conversion rate but his strike rate which was 67.78. He would have been considered a better batsman if he had this average in 1970s or 80s, but not when you needed more than run a ball to win the match. The game was changing but Dippenaar could not change according to it.

He is well known for his minimum contribution in South Africa’s historic chase when he scored 1 run in 7 balls when the target was 435 in 50 overs. This innings overshadowed the fact that he scored 101 (from 145 balls) in the previous match. Though his ton went in vain as Australia chased down the modest total of 247 with one wicket in hand,  his innings was worth complimenting and deserved to be on the winning side.

His minimal effort in the historic chase was one of the downfalls in his career. He was in his supreme form when he injured his right hand’s wrist. He was diagnosed with a dorsal ganglion which was hampering his right wrist movement.  Dippenaar was ruled out of India tour in his peak form. He averaged an impressive 47.37 in his previous 10 ODIs which included three half centuries and career best 123 against West Indies. On a side note he was on his best while facing West Indies. He had a staggering average of 64.58 scoring 775 runs across all formats (ODI & Tests).

Dippenaar has a law degree and a helicopter pilot’s license which was revealed by former South African skipper Graeme Smith on occasion of his teammate’s retirement. He might have not been a legendary cricketer but was a human being with a good perspective about life and respect, love towards the game. He raised his voice against Cricket South Africa (CSA) to revisit its quota system and  focus on betterment of cricket rather than dirty politics. On occasion of his retirement from all forms of cricket in 2012 he said, “I’ll never be able to totally break away from cricket. Cricket is a mirror-image of life – you sometimes have to endure bumps and bruises. It taught me to focus on the positives to be able to overcome setbacks”

Happy 39th birthday Human Hendrik Dippenaar! You might not be perfect but a true mascot for the game you love–Cricket. 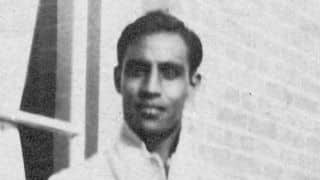