Chasing a target and losing both openers for ducks turns out to be a great blow for a team.

Recently there were two instances of both openers getting out for a duck in the fourth innings of a Test. Bharath Seervi lists all instances of past and infers how rare has been this occasion.

Within a span of 10 days there were two instances of both openers of a team getting out without scoring in the fourth innings of a Test. This had happened only eight more times in 138 years of Test cricket. Martin Guptill and Tom Latham got out for ducks while chasing 345 against England; New Zealand ended up losing the match by 124 runs in the final session of the Test. About ten days later Kraigg Brathwaite and Rajendra Chandrika did similar thing for West Indies against Australia chasing 392. West Indies lost the Test by 277 runs.

In all, these instances were ninth and tenth occasions of both openers getting out for duck in the fourth innings of a Test. It was the third time in last eight months after only seven instances since 1877. ENG vs NZ ODI series — A series breaking all batting records

Chasing a target and losing both openers for ducks turns out to be a great blow for a team. Winning the Test from such a situation becomes extremely difficult. Of the ten times this has happened only once has a team went on to win the match, while losing seven times. Below is the list of all the ten instances.

–          In the first instance, Jack Fingleton had scored 100 in the first innings and Jack Badcock was making his Test debut.

–          In the second instance, KS Indrajitsinhji was a debutant. Dhawan, Vijay and other opening pairs scoring 150+ for a team in the same Test innings

–          In the third instance, John Wright was out for duck in the first innings as well, thus registering a pair.

–          In the fifth instance, the opposition openers, Gavin Rennie and Craig Wishart, had both scored fifties in the second innings while the Indian openers were out without scoring.

–          In the sixth instance, both openers were out for golden ducks. The opposition openers, Gary Kirsten and Neil McKenzie, were both out for ducks in the first innings of the match. It is the only Test in which both the openers from both sides were out for ducks in an innings. Kohli, Sehwag among those with fastest ODI centuries, for and against Test playing nations

–          In the eighth instance, along with the openers the No. 3 batsman Mominul Haque was also out for duck. There were in all four ducks in the innings but Bangladesh won by seven wickets. It is the only instance of the three top order batsmen out for ducks in the fourth innings of a Test.

–          In the ninth instance, both openers had scored fifties in their team’s first innings. It is the only instance of an opening pair scoring fifties in first innings and ducks in the second innings.

–          In the tenth instance, Chandrika was making his Test debut and registered a pair. The opposition openers — Shaun Marsh and David Warner — scored fifties in the third innings of the Test.

–          Wright is the only opener and Lord’s is the only ground appearing twice in the above list. The leading run-getters in Test cricket for each team

There are 49 instances of both openers getting out for ducks in the same innings of a Test. Of these, 12 instances came in the first innings, 11 in the second, 16 in the third and 10 in the fourth innings of Tests.

In the Oval Test between South Africa and England in 2012, Alastair Cook scored 115 and Andrew Strauss was out for duck in the first innings. In the second innings Graeme Smith scored 131 and Alviro Peterson fell for a duck. These are the only two such instances in history of Tests.

The most ducks by openers from both sides in a Test is four. This has happened six times, of which the Sabina Park Test between Australia and West Indies in June 2015 was the last. England top run-getters in Tests: How the record changed hands over time

There are 52 instances of a batsman scoring duck in an innings and a hundred in the other. No one has scored a double century and a duck in a Test. The closest has been Saeed Anwar, who followed his duck with 188*.

Desmond Haynes, Kirsten, Michael Vaughan, Virender Sehwag and Andrew Strauss are the only five openers to score a duck in one inning and century in the other in the same Test twice. Nick Compton: Virat Kohli in time could be best among all 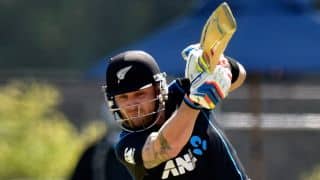