The third edition of the Bangladesh Premier League (BPL) 2015 turned out to be a bigger success than expected, with the final match of the tournament fittingly going down to the last ball. In an evenly-contested game, Mashrafe Mortaza won his third BPL title as captain by leading the Comilla Victorians to a three-wicket victory over the Barisal Bulls in the grand finale at the Sher-e-Bangla Stadium in Mirpur, Dhaka. The match was worth every penny as it lived up to its billing. Amit Banerjee presents the highlights of the match, which are listed below. FULL CRICKET UPDATES: Comilla Victorians vs Barisal Bulls, BPL 2015, final at Dhaka

1. Prasanna’s mini-blitz: Barisal skipper Mahmudullah decided to send in Sri Lankan leg-spinner Seekkuge Prasanna to open the innings alongside Mehedi Maruf in place of the out-of-form Rony Talukdar. The decision turned out to be a fruitful one, as Prasanna hammered two fours and as many sixes to notch up 33 runs from just 19 balls, helping his side get off to a decent start, especially after Maruf departed wicket early on.

2. Mortaza restricts Sabbir: Sabbir Rahman was perhaps one of the most talked-about players ahead of the game, mainly due to his brilliant 79 runs in Qualifier Two that helped setup a victory for the the Barisal Bulls over Rangpur Riders. This time however, it was opposition skipper Mortaza, who proved clinical in putting Comilla in a position of power by rattling the hard-hitting batsman’s middle-stump, after the latter was attempting to come down the track and play Mortaza over mid-on. At 68 for three, Barisal were staring at dark prospects ahead.

3. Shahriar, Mahmudullah to the rescue: One Barisal batsman who continued his sparkling form from the previous game however, was Shahriar Nafees. Coming in to bat at No. 4, Nafees rallied with skipper Mahmudullah at a time when Bulls were finding it tough to score. The pair however, batted brilliantly over the next nine overs or so, with Mahmudullah especially being harsh on Mortaza (hammering 16 off one of his overs). They added together 81 runs for the fourth wicket, before Mahmudullah fell agonizingly short of a deserved half-century, getting bowled by Nuwan Kulasekara with two balls remaining in Barisal’s innings.

4. Imrul continues brilliance with bat: Having hammered 67 runs in the first Qualifier against Rangpur Riders, Imrul was the batsman for the Barisal bowlers to watch out in the final. While the Mahmudullah-led side managed to get rid of Liton Das early in the innings, Imrul was ruthless in his  scoring runs, sending the ball scurrying all over the park. He hammered six fours and three sixes during his stay at the crease, with Comilla’s run-chase almost becoming one-sided at one point. Imrul shared a 54-run stand for the second wicket with Ahmed Shehzad, and the match seemed pretty much in Comilla’s bag with the scoreboard reading 92 for 2 in the 12th over.

5. The game turns on its head: After shining with the bat, it was Mahmudullah’s turn to impress with the ball. His dismissals of Shehzad and Kayes were crucial in swinging the balance of the match back in Barisal’s favour. The pressure was always on Comilla thereafer, and that is what caused Ashar Zaidi to perish after hitting a six and a four. Kevon Cooper bowled the penultimate over of the match, and removed both Darren Stevens and Mortaza in successive deliveries to nearly seal the deal for the Bulls, aside from becoming the leading wicket-taker in the tournament. Comilla needed a miracle to pull off a win, and their hopes were pinned on Alok Kapali.

6. Kapali the Hero: Few would have expected Comilla to pull off a win from that position. Kapali was batting on 18 off 20 balls, having scored a sole boundary, at the time of the time of Mortaza’s dismissal. The Sylhet-born batsman and part-time leg-spinner, who is widely remembered for his hat-trick in a Test against Pakistan in 2003, struck two boundaries off the remaining balls of the 19th over to keep the Comilla title hopes alive.

Kapali was at the non-striker’s end at the start of the following over. Shuvagata Hom was run-out while attempting a risky single in order to bring his partner on strike, which Nuwan Kulasekara achieved in the second ball. The next two balls were magical, as Kapali batted with nerves of steel to hit boundaries towards midwicket and backward point in the next two deliveries respectively. Kapali helped level the scores with a double in the fifth delivery, before taking a single in the final ball despite the fielders closing in inside the circle. It may very well go down as Kapali’s greatest moment in his career. 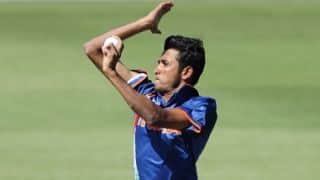