Sachin Tendulkar’s retirement is bound to affect how money rolls in and out of the Indian cricket board. There hasn’t been a bigger brand in the game of cricket than Tendulkar. Aayush Puthran analyses what makes him such a commercial hot property. 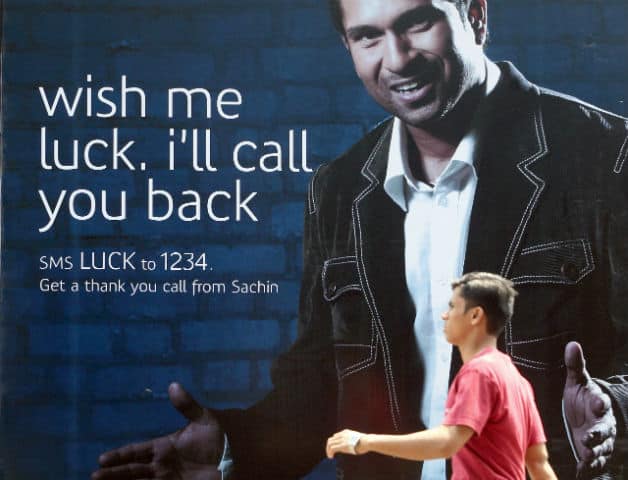 From promoting energy drinks to aerated sodas to telecom, electronic and software brands have gone on to associate themselves with Sachin Tendulkar © AFP

Sachin Tendulkar’s retirement is bound to affect how money rolls in and out of the Indian cricket board. There hasn’t been a bigger brand in the game of cricket than Tendulkar. Aayush Puthran analyses what makes him such a commercial hot property.

At a time when models were ruling the advertisement industry, it seemed unusual to have a 5’ 5″ inch tall cricketer, with average looks, raking in the ad moolah and becoming brand ambassador for countless products.

He doesn’t have the looks of a Virat Kohli, the swagger of a MS Dhoni or the overall personality of a Yuvraj Singh. So, what did Sachin Tendulkar signify for a multitude of brands to make a beeline for to be associated with them?

Tendulkar’s cricket signified excellence and his demeanor was a symbol of trust that transcended beyond regional boundaries within the country. One also has to take into account Tendulkar’s popularity and market value in the 1990s and 2000s, which is one of the most important reasons for the Board of Control for Cricket in India (BCCI) in being as rich and powerful as it is currently.

From promoting energy drinks to aerated sodas, electronic and software brands have gone on to associate themselves with Tendulkar.

As Ayaz Menon points out in Mint, “Tendulkar’s arrival in 1989 virtually coincided with India’s economic rise — the liberalisation of old controls that opened up society in ways until then unimaginable. This imbued people with a new desire and self-belief that, in many ways, Tendulkar himself embodied.”

“As the economy opened up, so did Tendulkar open up the coffers for cricket and cricketers, becoming not just the leading batsman of his era, but also the preferred brand icon of a bold new India, striking deals of a size that had, until then, been unheard of in the country.”

Ad Film Director Prahlad Kakkar has a different point of view on Brand Sachin. In an exclusive interview with CricketCountry, he said that Tendulkar is much more than a brand. He is an icon, much like Mahatma Gandhi.

He also went on to point well that Tendulkar’s retirement will be an ideal time for the brands to cash-in on his popularity. With festive season under way, it is bound to be a fiesta time for those who invested on Tendulkar the icon.

It is all the more surprising that Tendulkar created such a brand market, given the fact that he was never starry in looks or behaviour. His appeal wasn’t in the stardom, he seemed more human in approach, being the best in that sport that every other kid played on the streets of the country.

Invariably, Tendulkar has been a part of almost every Indian family… Every mother prayed for him, a father silently hoped for his success and the children cheered for their brother and friend. Brands don’t have to hunt for ways on selling him, the name is enough!