An arrangement has been made for legendary English pair to return to the Test side.

England’s current form had made the England and Wales Cricket Board (ECB) consider asking some of their retired fast bowlers back into cricket. While it is too late in ICC Cricket World Cup 2015 to make a replacement, Ian Botham and Angus Fraser are scheduled to come back in the Test side. Humjee Break-Sheikh has more…

Ian Botham is 59. Since his retirement a couple of decades back, British media had hailed every cricketer who could hold a bat or grip a ball as “the next Ian Botham”.  Unfortunately, the Ian Botham sequel never happened, though Jade Dernbach showed strong glimpses of emerging as the finest anti-Ian Botham in English history.

Angus Fraser is 49. You may think he was not an outstanding bowler, but the fact remains that of all English fast bowlers with 100 or more Test wickets since 1980, Fraser has the second-best bowling (after Bob Willis) — better than Botham, Darren Gough, Andy Caddick, Matthew Hoggard, or Steve Harmison.

In an announcement earlier today, ECB announced that both Botham and Fraser will make their international comebacks shortly. Though they will not be back for the World Cup, they will be playing subsequent matches. This is the part of a two-part game-plan —one of the greatest brainwaves ECB have had for a long time. ECB have also decided to host their home matches in India. In an interview with CricketCountry, Giles Clarke announced why it is going to be a success.

CC: But why exactly are you doing this?
GC: Is that not obvious? Why do you think we are recalling [Ian] Botham or [Angus] Fraser?

CC: Er, will you elaborate?
GC: Who made you a journalist?

CC: My apologies, Sir, but please tell us.
GC: Don’t you get it, even after I told you that all five grounds are in the state of Maharashtra? Isn’t that the state that has banned cow-slaughter? Don’t you realise that the batsmen will be banned from hitting Beefy and Angus? (Winks) Beefy, Angus — in Maharashtra — don’t you get it?

CC: Thank you, Sir. Congratulations on your strategy. 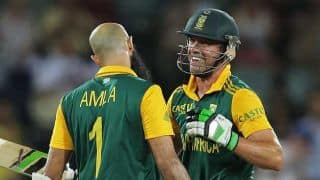