As Kohli swept Rashid and straight drove Ball (Jake Ball, I mean), on his way to his third double hundred of the year, Modi could visualise the revolutionaries sweeping away the British rule from the country.

It has been more than a month already but the problem of demonetisation has still gripped the common men of the nation. On the other hand, the faulty implementation of the scheme has only fuelled the opposition leaders to wash their dirty linens in public by taking a dig at the Prime Minister Narendra Modi. On Sunday, the PM was a worried man sitting at his lavishly simple home in Delhi eating the theplas that he just got delivered from Ahmedabad (of course, he paid via Paytm!). So, while the PM was enjoying his satvik breakfast, he happened to watch the ongoing India vs England Test series and what he witnessed yesterday gave him golden idea to solve the ruckus created by demonetisation.

As Virat Kohli swept Rashid and straight drove Ball (Jake Ball, I mean), on his way to his third double hundred of the year, Modi could visualise the revolutionaries sweeping away the British rule from the country. He immediately called Reserve Bank of India and informed Urjit Patel to quickly introduce 200 rupees notes and to scrap the existing 100-rupee notes.

A confused Jaitley wanted to know what the matter was behind this sudden decision to which Modi replied, “Jaitley sahab, the common man has now become ambitious. He is not satisfied with 100-rupee notes now. He wants the 200 rupee notes. The purchasing power of the Indian people will increase with this one stroke of genius.”

According to our close sources in the ministry, we were informed that this decision by Modi was just opportunism.

On the conditions of anonymity, the source informed, “Modi ji is riding on the Kohli wave. He knows that the Modi wave has practically ebbed. The new wave of the nation is the Kohli wave. By introducing 200 rupees notes as a tribute to Virat Kohli, Modi ji wants to turn the Kohli fans into his supporters!”

Arvind Kejriwal, the Delhi CM was very upset with this development. He even went on to the extent of calling Virat Kohli a ‘gaddar’ for backstabbing the common man. After all, no one knows about common men more than thim.

Kejriwal on his Facebook live said, “Kohli comes from a posh area in Delhi. In fact, his house is just besides LG Najeeb Jung. That guy has influenced Virat to turn into a BJP bhakt.”

Lalu Prasad Yadav said the move was against the common people of India.”But what about the common men like Jayant Yadav for whom 100 rupee notes are a world of satisfaction? Why introduce notes only in Kohli’s name and not new 100 rupee notes in the name of Jayant Yadav? This is an insult to Yadav community.” An angry Lalu commented before the start of his new entertainment venture where he mimics the prime minister on stage.

Narendra Modi was unavailable for comments, as he was too busy supporting the man from Gujarat, Ravindra Jadeja, who with the ball in his hand was happily making the English batsmen play garba on the wearing Wankhede pitch.

We have also heard that the new 200-rupee note will have Kohli’s face on it. 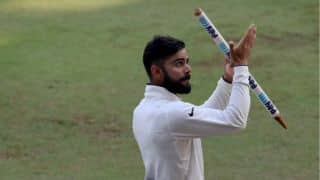 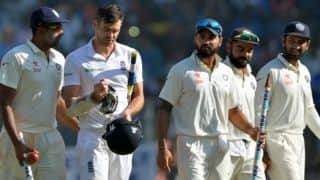