The tipping point for the probe came after Indian skipper Virat Kohli defended his soulmate Rohit Sharma after the Galle debacle.

Bowing to popular pressure, the Union Government has ordered a Central Bureau of Investigation (CBI) probe to conclusively settle the issue of whether Rohit Sharma is indeed talented. And, if so, where exactly is this talent.

The tipping point for the probe came after Indian skipper Virat Kohli defended his soulmate Rohit Sharma after the Galle debacle by saying, “Form is temporary, TALENT is permanent! You guys BC MC @$##$ don’t know how much TALENT is hidden in him!’ [Also Read: Sri Lankan move strikes terror in Team India camp!]

As soon as these comments went viral, the Supreme Court (SC) directed the government to order a CBI probe to investigate the matter and find out the TALENT in Rohit. A 15-member CBI team air-dashed to Sri Lanka to interrogate the Mumbai Indians skipper.

Upon arrival, the CBI took Rohit’s blood and stool samples and immediately sent it for forensics analysis. The results came out in the morning and it was surprising, to say the least, that they found traces of an unknown metal in Rohit’s stool and blood samples, clearly suggestive some kind of metal poisoning. The Mumbaikar reportedly gulped down 20 packets of Maggi ever since he landed in the Emerald Isle which could have LEAD to this discovery.

However, special tests were undertaken in laboratory to find out more about this metal and it is said to be a new structural form of Plumbum (LEAD). Confirming as much, the chief of CBI’s laboratory department, Dr. Salunkhe, said, “We found this new structural form of PLUMBUM while searching for TALENT in Rohit’s body so we are planning to name it ‘TALENTUM’ in his honour!! I hope this conclusively answers the question: ‘Is Rohit Sharma talented?’ ”

(The above article first appeared in the UnReal Times. The UnReal Times is India’s favourite satire, spoof, parody and humour portal) 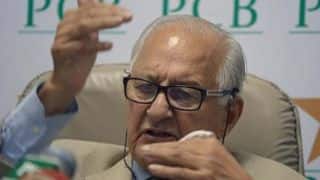