Gayle had earlier come up for consideration by the Trump camp after his ‘don’t blush, baby’ remarks to Australian female journalist, Mel McLaughlin.

Christopher Henry Gayle may end up as the second most powerful man in the world, come November 2016. Highly impressed with Chris’s latest round of allegedly sexist comments, this time to female journalist Charlotte Edwardes, Donald Trump has invited the big hitting Jamaican to be his running mate for the American Presidency.

Gayle had earlier come up for consideration by the Trump camp after his ‘don’t blush, baby’ remarks to Australian female journalist, Mel McLaughlin. But Trump had demurred then, feeling Gayle ‘perhaps didn’t make the cut’. But any lingering doubts regarding Gayle striking a chord with American voters were put to rest after his most recent interview in which Gayle held forth on possessing a heavy bat, threesomes, and gender equality. Read: Chris Gayle clarifies Mel McLaughlin “Don’t blush, baby” incident as a “joke”

Terming Gayle as ‘bona fide Vice-Presidential material’ and full of gravitas, Trump said it would be an honour and privilege to have “the Universe Boss” at his side in running the free world. “I have invited him and Natasha to join the Republican ticket asap. Chris assured me he’ll come over as soon as he finishes with the IPL and knock a few balls outta the park for us,” an excited Trump told The UnReal Times. Read: Chris Gayle opens up on his ‘big bat’, women, sex, cooking and changing nappies

Gayle was initially reluctant but readily jumped on to the bandwagon after Trump said he could get to play with even bigger bats in the form of American nukes, once elected. “Sweet azz, I get ejected from Big Bash league but get invited to the Big Boys league. All I have to say to Ian Chappell and Chris Rogers and other stuffy ex English and Aussie cricketers is ‘chew on a carrot and kiss my [edited out]‘,” Gayle told The UnReal Times cricket correspondent, Sara Jacob, before asking her out for a drink.

American pundits have termed Gayle’s inclusion a political masterstroke. “We don’t see Hillary winning from here on. The Trump-Gayle ticket is oozing with too much of sexism and that makes them very sexy. Hillary’s best bet is now another Bill Clinton sex scandal eruption to get the public back on her side,” American political analyst, George Stephanopoulos, told The UnReal Times.

(The above article is reproduced with permission from UnReal Times by C S Krishna.) 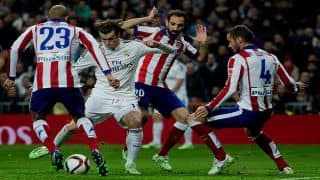