Brendon Baz McCullum went into something of a Berserker Frenzy against England.

Few cricketers can match Brendon McCullum’s sheer aggression with bat in hand. He hit a whirlwind innings of 77 off 25 balls against England in the ICC Cricket World Cup 2015 match at Wellington. Shiamak Unwalla feels that if cricketers were superheroes, Brendon McCullum would be Wolverine.

Fans of the X-Men character Wolverine would know that the superhero sometimes goes into a blood rage referred to as “Berserker Frenzy” during which he becomes an unhinged, savage version of himself. Brendon Baz McCullum went into a similar Berserker Frenzy against England in the ICC Cricket World Cup 2015 match at Wellington. FULL SCORECARD: New Zealand vs England, Pool A Match 9 at Wellington

The similarities don’t end with their violent tendencies either; Wolverine is a Canadian by birth, and Canadians have the reputation of being peaceful and cheerful by nature. Wolverine slashes that stereotype in inimitable fashion. Likewise, for a long time New Zealand cricketers had the reputation of being skilful but serene (well, almost); McCullum has been blasting that stereotype for years now. ICC Cricket World Cup 2015: POINTS TABLE

Then there is their mode of attack; Wolverine unsheathes his retractable claws and slashes his enemies with bloodcurdling results. McCullum slashes as well albeit with the bat and produces similarly violent results.

They even look similar. Wolverine is described in comics as being short, rugged, and with strapping muscles. McCullum, while not quite as short, is certainly not the tallest cricketer in the side. He usually has stubble, and might be described as being ruggedly handsome. As for his bulging biceps, few cricketers can match those broad shoulders and obvious strength; and those tattoos just add to the effect. ICC Cricket World Cup 2015: SCHEDULE & MATCH DETAILS

While Wolverine usually wears a yellow and black costume, one of his most iconic looks is with an all-black uniform he wore while leading a covert team called X-Force. McCullum, of course, is the captain of the Black Caps, whose black uniform by now has iconic status. [As Facebook reader Malay Bhalakia pointed out, McCullum plays for an IPL team that wears yellow!]

If cricketers were superheroes the World Cup would be a blockbuster. While the secret identities of Batman, Superman, Spider-man, Flash, Thor, Green Lantern (Shahid Afridi?) and Hulk might be secret (okay, Hulk would be Chris Gayle), there is little doubt that Baz McCullum would be would be the man whose catchphrase is, “I’m the best there best there is at what I do.” ICC Cricket World Cup 2015: Complete Coverage

McCullum is the best there is at what he does make bowlers run for cover! 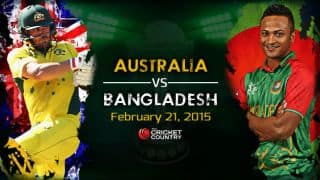 Jason Holder: Sunil Narine, not playing is a big loss