Following the Queen s Park Oval humiliation, Brian Lara decided to rise to the occasion. He won the Tests at Sabina Park and Kensington Oval almost single-handedly before launching into the Australians for one final time, on April 4, 1999. Abhishek Mukherjee looks back at an oft-forgotten St John s masterpiece.

They tossed the ball up; he danced down the track. They pitched it short; he rocked back. The back-lift was high, as always, and came down in an arc that was magical and brutal at the same time.

They tried to smother him; he responded with breathtaking drives and cuts. They tried to bounce him out; he hooked the way no one has.

They tried to bring down his side; he stood between his crumbling team and the unstoppable juggernaut, wielding his bat like an uncompromising sword, yet managing to evoke poetry with every indomitable blow he inflicted upon the opposition.

There was incomparable magnificence even in swordsmanship. No, the world has not seen the like of Brian Lara; especially not in the form he was in the Frank Worrell Trophy of 1998-99 when he put the strongest side in the world to the sword single-handedly.

He did not ward the storm away; he conquered it; he rode the tide and the wave, striking one blow after another, trying to bring the many-headed monster down; it kept on rising its head till his sword could do no more. They feasted upon what remained of his army.

Curtly Ambrose was on his way out. Courtney Walsh, the senior man, still had a few years down the line. Along with the young guns Mervyn Dillon and Pedro Collins they bowled out Australia for 269 at Queen s Park Oval. West Indies reached 116 for 2, but on came Glenn McGrath and Stuart MacGill; Lara scored 62 and Dave Joseph 50, but West Indies crumbled to 167.

Further humiliation awaited them after Australia set them 364. They lasted 19.1 whirlwind overs on either side of lunch from McGrath and Jason Gillespie and capitulated to 51, technically losing 18 wickets for 102. Barring Ridley Jacobs (19) nobody crossed 6 in the second innings.

The teams moved to Sabina Park. This time Walsh jolted Australia; they were 46 for 3 before the Waugh twins took them to 256. The McGrath-Gillespie show continued: West Indies were left reeling at 34 for 4; Collins, night-watchman, was hit on the groin; 56 for 4, one batsman down.

Jimmy Adams, the last of the specialists, walked out. The pair added 322: Lara raced to 213 from 344 balls; Adams scored 94; and Collins had enough time to resume. The Australian attack, tested for once, conceded 431.

The stage was set for the off-breaks of 30-year old Nehemiah Perry, who ran through Australia with 5 for 70 on Test debut. The series was levelled 3 balls after the Australian innings ended.

Australia rode on hundreds from Steve Waugh and Ricky Ponting at Kensington Oval, and despite Sherwin Campbell s hundred West Indies conceded a 161-run lead; their tail wagged, adding 231 for the last 4 wickets. This time Walsh rose to the occasion, but West Indies were still set 308, and were left reeling at 105 for 5.

Once again Adams came to party with a gritty 38. Once again wickets fell in a heap. 248 for 8, but Lara was around. Ambrose hung on grimly; they added 54 before the Antiguan giant fell.

Walsh left the ball with the bat in his armpit, blocked, poked, and punched the air once he survived Gillespie amidst tumultuous applause. Then they saw the familiar back-lift, followed by the telltale arc; the bat came down like a whiplash, sending the ball to the cover fence and the world erupted, for seldom have they witnessed anything of that quality.

Consecutive defeats called for desperate measures, and Steve Waugh dropped Shane Warne at St John s. Gillespie was left out too, and two youngsters Adam Dale and Colin Miller were drafted in, while Matthew Elliott was replaced by Greg Blewett. Meanwhile, Corey Collymore made his debut at the expense of Collins.

Waugh decided to bat, and Michael Slater and Blewett got Australia off to a 60-run opening stand in two hours. There was a mini-collapse as the tourists were reduced to 96 for 3, but Justin Langer scored a diligent 51; Ponting chipped in as well, but as was often the case, the onus fell on Waugh Sr the man whose double-hundred had ended West Indies unbeaten run in 1995.

Waugh battled it out for over 5 hours. He found company from Miller, who hit his way to glory, smashing a 38-ball 43, helping put on 53 in 46 minutes. Australia were eventually bowled out for 303; Ambrose claimed 5 for 94, but could not dismiss any of the top five. McGrath and Dale bowled tightly before Waugh introduced Miller. The opening stand crawled to 19 in almost an hour before Miller, bowling medium-pace, removed Adrian Griffith and Campbell in quick succession. The score read 20 for 2 when Lara joined Joseph.

One hundred minutes of magic

If Lara had been clinical and exhilarating at Sabina Park and Kensington Oval, he was murderous at St John s. He took 13 balls to get off the mark, but soon an over-pitched delivery from Miller was banished to the cover boundary. A pull to the mid-wicket fence followed, and cover was beaten again. Then followed two on-drives, one along the ground, the other soaring high above the fielders; a slog-sweep from outside off-stump then cleared mid-wicket fence.

It was strokeplay at its very best. Wisden wrote: It revived memories of Viv Richards s 56-ball hundred on this ground against England in 1985-86. It was as though Lara had neither the time nor the energy to play conventionally.

McGrath pitched up, but was punished by the uncompromising willow: the fielder at point could not move. Stuart MacGill dared to pitch slightly short, and the ball was pulled disdainfully to the mid-wicket fence to bring up Lara s fifty from 61 balls.

Then he decided to cut loose without the slightest sign of inhibition. Another pull off MacGill followed. McGrath tried the off-stump channel again: Lara unleashed a Sanath Jayasuriya, and slashed so hard that the ball flew over backward-point.

MacGill tossed the ball up twice: a four and a six. A back-foot on-drive and a pull off Dale followed. The second one was an astonishing stroke: it was slightly short, Lara rocked back, and those steely forearms sent the ball into the crowds over mid-wicket.

The straight-drive that followed was hit so hard that Joseph had to duck to save his own life. Poor Dale bowled a full-toss that Lara hit over mid-off. A cross-batted swat sent it past mid-wicket, and a sweep off Miller got him to the coveted landmark.

The second fifty had taken him 21 balls and had included 7 fours and 2 sixes. Joseph was left on a 64-ball 15. The onslaught did not last long, for it was too good for that: McGrath bowled short outside leg; Lara tried to fend it; he did not time it; Ian Healy flung himself to his right and came out with a spectacular catch. Steve Waugh applauded Lara as the great man walked back: he had scored a round 100, off only 84 balls; the partnership had amounted to a mere 116.

Joseph and Carl Hooper added 40 for the fourth wicket, but West Indies lost their last 8 wickets for 46, conceding an 81-run lead. Ambrose took out Blewett early, but the West Indians could not go past Langer: he added 61 with Slater and 147 with Mark Waugh, batting the hosts out of the match.

Langer eventually fell for 127. Walsh and Hooper ran through the tail, but Australia still set a target of 388. West Indies reached 25 before Griffith was hit on the elbow by McGrath and had to retire hurt. Joseph s adventures did not last, and for once Lara failed, trapped by McGrath for 7. Blewett chipped in with two crucial wickets; Griffith, resuming his innings at 87 for 4, helped West Indies reach 211. He batted for almost 5 hours for his 56, but it was not enough: West Indies were bowled out before tea.

– Lara finished the series with incredible numbers. He scored 546 runs at 91 and a strike rate of 65, and hit 7 sixes. No other West Indian scored 200, had an average of 30, or a strike rate of 45 in the series, and the only other six came off Joseph s bat.

– The 7-match ODI series that followed was a keenly contested one as well. West Indies went up 1-0 and 2-1, but Australia levelled the series both times. With the fifth match ending in a tie and Australia winning the sixth, West Indies had to win the seventh which they duly did.

Man of the Match: Justin Langer.

Man of the Series: Brian Lara. 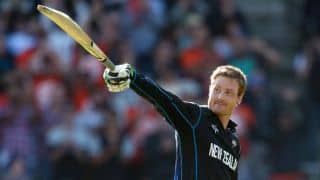