March 30, 1999. Brian Lara’s moment of miracle. The 153 not out at Barbados was perhaps the best innings of his superb career. Arunabha Sengupta remembers the tantalising one wicket victory against the Australians. 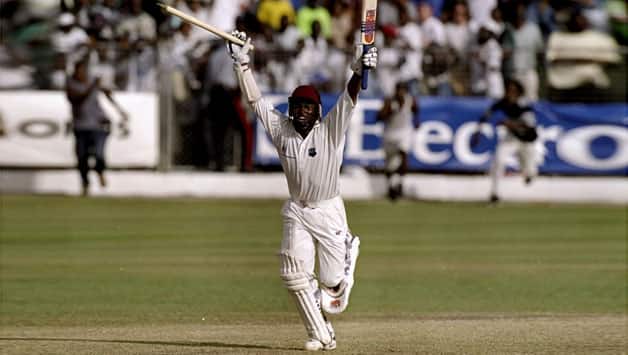 West Indies captain Brian Lara celebrates after hitting the winning runs in the Third Test against Australia at the Kensington Oval in Bridgetown, Barbados. Lara scored an unbeaten 153 in the second innings as the West Indies won by 1 wicket to go 2-1 up in the series in what remains one of the greatest-ever innings in Test history © Getty Images

March 30, 1999. Brian Lara’s moment of miracle. The 153 not out at Barbados was perhaps the best innings of his superb career. Arunabha Sengupta remembers the tantalising one wicket victory against the Australians.

It was the prodigal son who turned messiah on that balmy day at Bridgetown.

The Australians, a winning unit of flair and flame, had arrived to conquer the sun-kissed islands. And they had started emphatically, Glenn McGrath and Jason Gillespie blowing the West Indies away in 19.1 overs for 51 at the Queen’s Park Oval.

However, captain Brian Lara roared back at Sabina Park, settling into the form of his life, stroking imperiously for 213. West Indies squared the series with a 10-wicket victory. Originally appointed skipper till the end of the second Test, Lara was given the reins for the whole series.

But, by the time the captain walked out to spend 28 awkward minutes amidst shadows that lengthened across the pitch on the fourth afternoon, the match looked hopelessly lost for the West Indies.
The first escape

In fact, it had already been brought back from the brink of hopelessness earlier. Australian skipper Steve Waugh had carried on from his hundred at Kingston, falling one agonizing run short of what would have been an epic double hundred. Ricky Ponting, in the team only because of an injury to Greg Blewett, stroked his way to 104. Australia’s first innings was an imposing 490 — a magnificent effort considering the high class fast bowling they had to wade through during the initial period.

Off the third ball of the West Indian innings, Ponting ran like a flash from cover to run out Adrian Griffith. McGrath and Gillespie now tore through the batting, the latter getting Lara, fending a short ball, for just eight. West Indies ended the second day at 80 for four, and on the third morning collapsed to 98 for six.

The teams had gone in with slow bowlers, expecting the wicket to provide turn. Nehemiah Perry and Carl Hooper were supposed to do the job for West Indies, while the Australians had a rather better off in the spinning department, with the two leggies Shane Warne and Stuart McGill.

This was before the Eden Gardens miracle of 2001. Hence, with the end of the innings in sight, Steve Waugh decided to give his fast men a rest before the follow-on was imposed. The spinners were put on.

Sherwyn Cambell and Ridley Jacobs found this a much-needed relief, and fought back with a gritty partnership. The leg-spinners were expertly milked, and Campbell, the local boy, went on to play the most important innings of his career. By the time McGrath was brought back, the partnership had started to look menacing. It took an inspired bowling change in the form of Ricky Ponting to finally get Jacobs for 68. But 153 had been added — a figure that would come back to haunt Australia later in the match. Some dogged resistance by Perry, Curtly Ambrose and even Courtney Walsh helped Campbell take the hosts past the follow on mark.
The collapse

Boosted by a 161-run lead, Australia’s second essay was disappointing. Admittedly Walsh was brilliant, untiring and relentless and Ambrose gave little away. But, a lot of the dismissals were due to uncharacteristic indiscipline. Michael Slater was run out rather needlessly, Steve Waugh dragged a ball on to his stumps. The innings folded at 146.

The target of 308 was not exactly what Australia had in mind when they had set to bat West Indies out of the match. Campbell and Griffith, the Bajan openers, put together 72 for the first wicket. But, when three quick wickets went down for another 13 runs before the end of the fourth day, the Australians were on top. Lara walked back unbeaten on two, Griffith in company.

The final day started with the familiar tumble of West Indian wickets continuing from the previous evening. Gillespie got Griffith leg before and Hooper caught behind to reduce the hosts to 105 for five. The target by now took on the proportions of an insurmountable peak. Brian Lara was still there, but it was perhaps too much to demand miracles from him in every Test match.
The miracle

But as mentioned, Lara did turn the messiah, performing miracles with the wand of a bat. In the previous Test he and Jimmy Adams had added 322.

And now, as Adams dug in, sparks of esoteric genius flashed from his blade. The body perched on to those springy toes, coiling up in a prodigious store of potential energy before flowing into the dynamic outpouring of the strokes. The covers were pierced off McGrath and Gillespie. McGill was twice disdainfully lofted over the mid-wicket and turned to fine leg for three boundaries in an over. Steve Waugh was dispatched with scornful arrogance. At lunch the score stood at 161 for five. The Australians were still ahead by a long way, but the fight was on.

After the break, the Bridgetown crowd was treated to an unforgettable afternoon of scintillating brilliance.

A long hop from Warne was swung over deep midwicket on to the colourful roof of the Greenidge and Haynes Stand – the stroke bringing up Lara’s half century.

Warne now pitched into the rough, and the ball turned in a long, long way. Lara waited and late-cut against the break, delicately past slip for four.

A savage cut followed off McGill. Steve Waugh was threaded through point and swung over mid-on. The Australians feared the worst and McGrath was brought back and handed the new ball.

The legendary pace bowler pitched short and Lara ducked into it. The ball struck the back of the maroon helmet and the great batsman lost his balance. He was up in an instant, running for the leg-bye, a smile breaking through his visage. When he reached the other end, he rammed into McGrath. The two champions glared at each other in a battle of will and eye-balls. McGrath went back to his mark, and bounced again the next over. Lara rocked back and pulled him with élan, the ball speeding through mid-wicket for four.

When Gillespie came on, down came the bat from the great heights of that enormous backlift, and swung in full elegance till the final moment of the follow-through. The ball disappeared in a streak through the covers — twice, once off the front foot and once off the back. Less than hundred were required now.

Warne ran in, and Lara charged down the wicket, lifting him over the mid-on for four. Off came the helmet and the crowd roared in throes of delight. Lara had brought up his hundred in the absolute attitude of arrogance that had characterised his entire innings. The second fifty had come off 51 balls, the landmark off 169, with fourteen boundaries and a six. Immediately afterwards, he hit one back, hard and in the air. Warne stuck out his hand, but the ball went down. The Australians looked heavenwards in anguish.

Four runs later, at 238, McGrath sent down a peach of a delivery. It swung away at the last moment, beat the edge and took the off stump of Adams.

McGrath, already over 30 overs behind him in the innings, ran in again. Jacobs leaned forward and was hit on the pad. The Australians went up and he was adjudged leg before. The very next ball had Perry tentatively thrusting his pad forward, hoping for the best. Up went the umpire’s finger. With three quick wickets the supreme fast bowler had again swung the balance. At 248 for eight, the target once again looked formidable. Lara was still there, but someone had to stay with him.

Ambrose did. The giant Antiguan, the bat an oversized toothpick in his hand, stayed rooted for 39 balls, scoring 12. In between Lara pulled McGrath again, swept Warne, finishing the stroke with one hand, and as the field closed in to cut off the single off the last ball, stepped  down the track to on drive the leg-spinner to the boundary. In the next over from Warne, Lara stretched out, his head on top of the impact, almost sniffing the ball and hammered it through the covers in magnificent fashion.

At the other end, McGrath, past 40 overs for the innings, was still running in. Ambrose poked him through gully for four and the bowler stood with hands on his knees, head drooping. Just 14 were required now.

Seven runs later, tragedy struck Australia yet again. Gillespie pulled the last trick out of his sleeve and got the ball to leave Lara. The batsman tried to glide it to third-man. There was a thick edge, and Ian Healy, flinging himself to his left, could not hold on. Lara received his second reprieve. The West Indian crowd was ecstatic.

A run later, with six needed for a win, Gillespie pitched short and Ambrose flirted at it. The ball flew to the gully, and Matthew Elliott, who had scored three ducks in a row, clutched it as if his life depended on it.

Courtney Walsh walked out, that lovable remnant from the days when rabbits were part and parcel of the batting line up. His serene face spoke of no terror. One wondered whether he knew enough of the art to be afraid. Batting was not his job.

Gillespie sent down a no-ball, and McGrath a wide. The fast bowlers were on their last gasps of air, lungs and sinews worked to the limit, still running in, striving for that last wicket. Walsh left balls with a flourish, the bat ending clutched between his arm and chest in the follow-through. And when McGrath fired it in at the yorker-length with his final burst of energy, some divine intervention saw Walsh’s bat come down and somehow stop the ball dead. The stadium emitted a synchronised sigh.

And finally, Gillespie ran in with the field up, and Lara drove through the covers — yet again — and the stands erupted. West Indies had pulled off an incredible win. The crowd rushed into the playing area in a stampede of joy. West Indies captain Brian Lara is swamped by fans after hitting the winning runs in the Third Test against Australia at the Kensington Oval in Bridgetown, Barbados © Getty Images

Lara had batted seven minutes short of six hours, faced 256 balls, struck 19 fours and a six in his 153. The next highest score in the innings had been 38 by Adams.

On the front page of Daily Nation, the Barbados newspaper, the headlines screamed “Match of the Century”. The correspondent Haydn Gill wrote: “It will go down in the history books as one of the most spirited ever revivals, the victory coming from the depths of despair.”

Steve Waugh called it the greatest Test he had ever played in.

But, it was the description of Walsh that remains truly delightful. According to the Jamaican who survived those five tantalising deliveries, it was he who won the match with the bat … with a little help from Lara.