Bruce Almighty at it again! Oxenford has a history of making dubious decisions

Bruce Almighty at it again! Oxenford has a history of making dubious decisions

The reversal got Mahendra Singh Dhoni worked up like never before in his international career, while the tragic-comic decision was debated animatedly off the filed by spectators, commentators and fans. 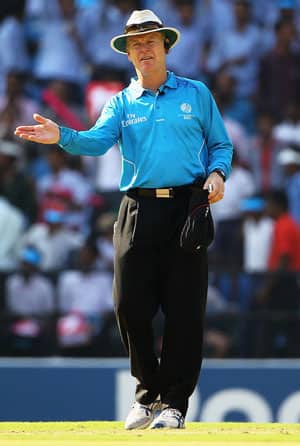 Sunday, February 19, 2012 saw another bizarre and unprecedented incident happen in an international game of cricket in which India, yet again, found themselves as one of the teams involved in the middle — or, more appropriately, muddle! Mike Hussey, the game changer, was declared out — stumped — by the third umpire. Slow-motion replays showed that it was a close call, and the common belief was that the benefit of doubt would go to the batsman — as the rule demands. Then came the decision that took everybody by surprise — the electronic scoreboard showed that the third umpired had adjudged Hussey out. But the drama had just begun! The on-field umpires, who were communicating with the third umpire, hurriedly stopped Hussey in his tracks and told him that he could continue batting — the scoreboard was not showing the right decision!

The reversal got Mahendra Singh Dhoni worked up like never before in his international career, while the tragic-comic decision was debated animatedly off the filed by spectators, commentators and fans.

One can the umpiring decision a “silly mistake” or “nervousness” or even attribute the decision to “rush of blood”. However, as TV commentators Wasim Akram and Ravi Shastri opined, it should not have happened in the first place. Akram made a very valid point that the third umpire’s job is really not as demanding or as tiring as the umpires on the field of play. He is expected to make such decisions without hitch. All he has to do was to see the replays and make his decision by pressing the right button.

The third umpire here in question is Bruce ‘Almighty’ Oxenford.  The reason one terms him ‘Almighty’ is because of the fact that, as the third umpire, he had all the powers — ability to check replays from different angles, slow-motion replays, and latest technology like Hot Spot/Hawk Eye etc. before making his decision. According to some reports in the media, umpire Oxenford has apparently claimed that the “error was on the part of the technology” where the wiring may have gone wrong or even a software error could have occured. To add to the confusion, the technicians claimed to have checked and tested the system and could not replicate the error to prove it as a technical glitch.

Let’s leave this fiasco aside. The unpalatable fact is that Oxenford has a serious history of poor calls behind him when it came to making decisions as a third umpire. It was Oxenford who was the third umpire in the highly-controversial 2008 Sydney Test match between Australia and India. It’s a Test no Indian fan or player can easily forget.

Andrew Symonds scored a blistering hundred when Australia was clearly struggling on Day One of that Test. Symonds scored an unbeaten 162 in the first innings with four reprieves, thanks to some poor decision making by the umpires — on-field as well as the third umpire — which clearly turned the match in Australia’s favour.

There were two incidents in that Test that come to mind. The first, where Dhoni stumped Symonds off Anil Kumble and the decision was referred to the third umpire. TV replays clearly showed that Symonds’ back foot was in the air. Even after seeing the conclusive evidence, Oxenford adjudged Symonds not out!

The other incident happened when Dhoni appealed for a leg-side stumping against Symonds off Harbhajan’s bowling. This time though, Mr. Steve ‘I’m-always-right’ Bucknor decided that the shout wasn’t worth referring to ‘Almighty’ sitting up in the third umpire’s room. Replays showed that the foot was on the line and there was no way that it could have been termed as not out. However, Oxenford was in no mood to deliver justice on that particular day when he could have easily communicated with Bucknor on his walkie-talkie and informed him that the batsman was out.

Another glaring similarity between the 2008 Test and Sunday’s ODI against Australia were the dismissals of Sourav Ganguly and Virat Kohli. Ganguly was given out caught by the on-field umpire Mr. Mark ‘I-don’t-like-DRS’ Benson as a result of checking with the Australian skipper Ricky Ponting who raised his finger as if he was the final authority. TV replays showed clearly that the ball bounced before Michael Clarke pouched it. Even if it wasn’t the case, there was enough doubt to rule the batsmen not out based on inconclusive evidence. Wonder why the third umpire did not chip in at that point of time to have a chat with the on-field umpires for this one.

In Sunday’s game, Kohli was given out caught by David Hussey at slip which was referred to the third umpire to check if the ball was taken cleanly. Oxenford took all the time in the world to see umpteen replays before declaring Kohli out. Shouldn’t the benefit of doubt rule gone in favour of Kohli?

No wonder Dhoni was all charged up and taking shots at the on-field umpires for making a mockery out of the decision. All these instances would have bottled up in the Indian captain’s memory and would have led to that frustration and outburst. In fact, in the post-match press conference he also mentioned that he had been given out on one occasion by seeing the wrong replays of a delivery by the third umpire and he should also have been called back. People might criticise him for opposing the Decision Review System (DRS), but as a professional cricketer and captain, his frustration is completely understandable.

Justice has to be uniform and a degree of consistency has to be maintained. The International Cricket Council (ICC) should take necessary steps that such an embarrassment is not repeated.

In closing, one feels that Oxenford could get himself a role if there is a remake of the 1983 Bollywood film ‘Andha Kanoon’ which showed that law can, indeed, be blind.

(Venugopal Rajgopalan is a passionate cricket enthusiast, a decent club-level cricketer, a keen observer and an analyst. He has worked with international and domestic teams in tournaments like IPL and MPL (Maharashtra Premier League) as a performance analyst and had the good fortune to look at the game from closer quarters and understand its intricacies. Venu is on CricketCountry to share his insights, experiences and observations about the game)

Ricky Ponting accepts the inevitable after being dropped from ODI squad

Mohammad Kaif, Amir Khan guide UP to win against Railways