A champion in the Halifax Cup, Charles Christopher Morris toured England several times, and later played for USA, and even a combined team of USA and Canada.

Charles Christopher Morris, born June 30, 1882, was a turn-of-the-century Philadelphian cricketers. A champion in the Halifax Cup, he toured England several times, and later played for USA, and even a combined team of USA and Canada. He later worked tirelessly to keep cricket alive in USA, but in vain. Abhishek Mukherjee looks back at one of the last eminent American cricketers.

They sometimes referred to him as C Christopher Morris, sometimes as Christie (or Christy) Morris. He hailed from an eminent cricket family of Villanova, Pennsylvania, close to the hub of cricket in the United States — Philadelphia.

Christie came from an eminent family of cricketers. His father Thomas played for USA, while his elder brothers Joseph and Harold both played for Merion Cricket Club in the Halifax Cup, as did their cousins Alfred and Samuel. Alfred even represented Gentlemen of Philadelphia. To round things off, Theodore, nephew of Joseph, Harold, and Christie, also played for Merion

Readers of the 21st century may find it difficult to believe, but cricket was a major sport in both USA and Canada in the 19th century. It is well-known by now that USA and Canada played the first ever international match, back in 1844.

But cricket in USA predates that match by a century, way before American Independence. Cricket had spread outside Philadelphia and New York; there was even a club in Richmond, Virginia. All this happened way before the British even properly set up home in Australia. Indeed, USA was cricket’s second home; in return, cricket was USA’s biggest team sport.

Three English teams toured North America, in 1859, 1868, and 1872, the last featuring a young WG Grace. Most of these were odds-matches (where the hosts often fielded teams of more than 11 players), but when it came to the Philadelphians, the English were given a run for their money.

Unfortunately, cricket was slowly reduced to an amateur sport after the American Civil War. Cricket still continued, especially in Philadelphia, which hosted the prestigious Halifax Cup from 1880 and 1926. Merion CC, founded in 1865, was one of the strongest teams of the tournament.

The Philadelphians gave both the Australians and the English run for their money whenever they competed. They toured England in 1897, 1903, and 1908, and hosted teams from both countries. They boasted of Bart King, the greatest American cricketer; ‘Ranji’ Hordern, who perfected his googly for the Philadelphians before playing Tests for Australia; and the child prodigy Nelson Graves.

If one considers all matches, the numbers change drastically. From 344 matches he scored 10,572 runs at 26.69, while his leg-breaks, never used at First-Class level, fetched him 125 wickets at 18.90. Wisden credited him being “one of the first American players to experiment with the googly.”

Also a part-time wicketkeeper, he claimed 227 catches and 6 stumpings. For Merion (and its numerous variants) the numbers read 29.52 and 19.44.

Morris went to Friends’ Select School and Haverford College. By 14 he was playing for his school team. The next year he was already playing for Merion Summer XI and Merion Juniors.

He continued to play for both Friends’ and Merion, playing some crucial innings — 50 against Hamilton School, 102 against Drexel Institute, 63 and 53 against Radnor, and 48 against Belmont Juniors.

In the November 1927 edition of American Cricketer, Dr AH Graham wrote: “Mr. Morris has always been an attractive bat to watch, scoring quickly, hitting freely and yet possessing a thorough knowledge of the game and a good defence. He has always been a big match player, the higher the stakes, the better he played, and has often appeared to great advantage against strong invaders from abroad … He has always been a good fielder, thoroughly sage and reliable and at times has bowled with quite considerable degree of success.”

He made his Halifax Cup debut in 1899, scoring 9 but taking a wicket and a catch. Later that year, when KS Ranjitsinhji brought his side over, Morris played them for Philadelphia Colts; he got 0 and 2.

Morris was selected for the 1903 tour of England. He got 395 runs at a mere 20.78, but he had one big innings; not only was it the highest score for the tourists, it was also the highest for any American till that point. After Nottinghamshire conceded a 5-run lead, Morris batted solidly for his 164 before the Gentlemen of Philadelphia romped to a victory.

Unfortunately, the innings was followed by a run of 1, 2, 2, 4, 0, and 2, and the impetus was lost. He even scored a pair against Kent. It was, however, a successful tour for the team, where they won 6 and lost 3 out of 15 matches. The big win came against Gloucestershire, when the tourists scored 155 and bowled out the hosts for 86 and 43.

Back home, he emerged as a star for Haverford College. When a not-too-strong MCC toured USA in 1905, Morris played them twice. In the second match he scored 55 not out and 44 as the hosts won by 61 runs.

He toured Bermuda with the Gentlemen of Philadelphia in 1907, and played MCC at home. He went on another tour of England the year after. This time he had a worse outing, with 347 runs at 19.27. Unfortunately, the overall batting performance was so shambolic that only Arthur Wood (389 runs at 24.31) scored and averaged more.

This tour could have been a disaster, but for King, who had a phenomenal season. His 87 wickets came at a ridiculous 11.01. Such was King’s dominance that the other Philadelphian bowlers claimed only 77 wickets between themselves.

To his credit, Morris played a few crucial cameos. His only fifty (74) came in an innings defeat against Hampshire, but there were some innings of note: he top-scored against Surrey with 26 when the tourists were bowled out for 105; and against Kent he got 48 out of 188 (the tourists threw away the 86-run lead by getting bowled out for 37).

The Australians toured North America in 1912 (under Syd Gregory) and 1913 (under Austin Diamond). Morris’ greatest First-Class innings came against the second of these sides, against an attack consisting of Jack Crawford, Charlie Macartney, Arthur Mailey, and Sid Emery.

The feeble resistance at the top of the order did not amount to much as the Philadelphians were reduced to 30 for 3. Morris played a lone hand with 78; only two other batsmen reached double-figures as the hosts put up 164. The match petered out to a draw.

It was a performance good enough to earn Morris a spot in a combined Canada and USA team that took on the Australians. This time the tourists were merciless: first Macartney slammed 186 to take them to 402; then the hosts succumbed to 182 and 73, Crawford taking 3 for 31 and 5 for 35.

It was Morris’ last match, and he played a lone hand in his final Test innings. While nobody else reached double-figures, Morris, opening batting, scored 31.

Halifax Cup continued throughout World War I. For the willing, there was no break in cricket in Philadelphia; unfortunately, not many were willing to pursue with the sport, even in the cradle of American cricket.

The formation of Imperial Cricket Council in 1909 had already hit cricket in America hard, for though Australia and South Africa qualified by virtue of being part of the British Empire, the same did not apply for USA.

At the same time, baseball grew in stature in the country. The amateurs could still have seen the sport past The Great War, but with tennis and golf gaining popularity among the privileged, the popularity of cricket took a nosedive.

The clubs went one by one. Even Belmont CC, the club of King, was disbanded in 1914 — a year after they took to football (soccer).

Morris worked relentlessly to keep cricket alive in Philadelphia. As for his own career, he bowled more and more, thus playing a crucial role for Merion. Against Germantown in 1920 he took 8 for 47 (for some reason, USA had 10-ball overs), his career-best in any form of cricket.

He formed an all-Philadelphia side in a last effort to revive the sport. He took the curiously named Philadelphia Pilgrims to England in 1921. Against MCC at Lord’s Morris top-scored with 73, but this was a Second-Class match.

In a desperate attempt to restore cricket in North America, Morris          and Norman Seagram (of Toronto) organised matches between the two cities. With KA Auty of Chicago he tried to form an all-American cricket club. Unfortunately, neither venture worked out owing to lack of enthusiasm.

By the 1930s cricket was on the verge of extinction in the country despite his desperate efforts. It would take decades for the Americans to turn to cricket; even that happened thanks to the expatriates from Asia and the Caribbean.

Morris played serious cricket till 53, and turned up for Haverford Alumni even at 69. Even after World War II (he was in his sixties by then) he continued with his valiant efforts. When the Forty Club honoured him with a dinner in October 1966, cricket enthusiasts from all over the vast nation turned up.

Christie Morris passed away in 1971, a fortnight before his 89th birthday.

His legacy lives on, for Haverford College named their cricket library after him. The C Christopher Morris Library is an incredible collection of cricket literature and memorabilia (including all editions of American Cricketer). A significant proportion of this enormous collection came from Morris’ personal library in Villanova.

The library website states that they are the “largest collection of cricket literature and memorabilia in the Western Hemisphere.” 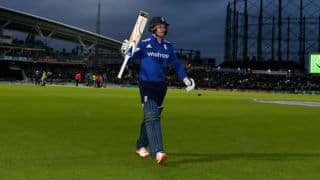