Three Cachopa brothers took nine catches between them in the same innings.

Playing for Auckland against Wellington in a Plunket Shield encounter, the Cachopa brethren were in action, sharing 9 catches between them on December 11, 2014. Abhishek Mukherjee looks at the kind of incident that never fails to bring smiles to cricket-lovers.

Carl Cachopa is 28. Brad, 26. Craig, 22. Between them the Cachopa brothers had played 107 First-Class matches before they took field against Wellington at Basin Reserve that day. They are certainly not the first set of brothers to take field together, and will not be the last, either.

One wonders what kind of comments the Cachopa brothers of Auckland had to bear while growing up, especially if they dropped catches. That is the kind of surname that one associates with cricket. Arthur Fielder must have had to go through the same. Or Peter Bowler.

The Cachopas had taken seven catches by then, but “caught Cachopa bowled Cachopa” was yet to occur. Then Nicol brought on Carl Cachopa to bowl seam-up; he immediately removed Woodcock, caught-behind by — you have guessed it right — Brad Cachopa; the Carl Cachopa-Brad Cachopa combination worked again as Ili Tugaga fell; Wellington were bowled out for 199 in exactly 60 overs.

The Cachopa brothers took nine catches between them in a single innings. Brad Cachopa had five (two of them off Carl Cachopa); Craig Cachopa, two; and Carl Cachopa, the other one. But the story had just begun.

Carl Cachopa opened batting with Jeet Raval, but the moment Gillespie removed the latter, Craig Cachopa walked out to join his brother. The Cachopa catchers caught Wellington unaware, this time with the bat till Craig Cachopa retired hurt. Carl Cachopa batted on before he was dismissed. Auckland finished the day on 117 for 2. Brad Cachopa fell for 20 the following day before Papps declared with a 6-run lead.

The rest of the match was anti-climactic: Michael Bates bowled out Wellington for 133 with his left-arm seam before Colin Munro sealed a 6-wicket win with a 75-ball 59. 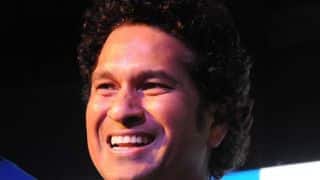 Sachin Tendulkar is awarded the Order of Australia