Yuvraj Singh dropped from the Indian probables squad for the upcoming World Cup.

Yuvraj Singh has seen many ups and downs in his career and life. From the Man of the Series performance in World Cup 2011 to fighting with cancer, he has gone through many phases so far. Presently he is fighting another battle — one to come back to the Indian team. Can he be successful? Sandipan Banerjee throws more light.

Yuvraj Singh’s career can be a classic case study for the researchers to showcase the uncertainties of an athlete’s life. From being India’s World Cup hero in 2011 and most expensive player in Indian Premier League (IPL) 2014 to the axing from India’s list of 30 probables for next year’s World Cup and the termination of central contract for Board of Control for Cricket in India (BCCI) — Yuvraj’s career graph has been a topsy-turvy one.

The question lingers: is his international career finished? Or can he make a comeback?

Since his comeback after cancer in 2012, Yuvraj has not been the usual flamboyant cricketer, who single-handedly won India matches. It is perhaps understandable. He became quite circumspect about his game. But he has featured quite regularly in India colours. Unfortunately, his life changed once again after the miserable innings in ICC World T20 final. His 21-ball 11 on that day changed the tide. He was made scapegoat for the unexpected defeat.

As a result Yuvraj ended up losing his place in the One-Day International (ODI) squad to Ambati Rayudu, who is certainly not as gifted as Yuvraj. The next blow came when, Royal Challengers Bangalore (RCB) decided to release him. However, the most cruel blow came when he was axed from the list of India’s World Cup probables.

Yuvraj is one proud individual and these many scrapes might have just fired him up to prove his worth once more. He is not going to give up, or at least it seems so. Like a diligent student, Yuvraj has gone back to basics to reform his career. In 2014-15 domestic season he has been a regular feature in the Punjab team. When everyone was busy watching the MS Dhonis, Virat Kohlis or Rohit Sharmas, a determined Yuvraj came out for Punjab in innocuous venues like Nadaun, Bilaspur, Patiala with limited facilities and ambience and next-to-none fan-following.

Yuvraj still kept on playing. He wanted his bat to do all the talking. He was initially not successful. The southpaw had an average performance in the Vijay Hazare trophy. In most of the games he got out in the 20s. But he still hung around and started the preparation for the Ranji Trophy. India announced the list of World Cup probables just after the Deodhar Trophy. By the time Yuvi played his first Ranji Match this season, he knew his name was not in the list.

For most, it would have been demoralising. But Yuvraj is true fighter. He channelised his anger, his frustration into his game, which resulted an elegant 59 and 130 against Haryana on a green wicket at Patiala and guided Punjab to victory. He followed it up with another First-Class hundred his next game at the MCA Stadium, Gahunje, Pune just after the RCB snub.

As per the International Cricket Council (ICC) rules, a team can pick a player for their final 15-member World Cup squad from outside the list of 30 probables. If Yuvraj continues to perform like this, it will be hard for the selectors not to consider his name for the mega event, especially given his experience and record in Australia. The selectors may even want to see him in the tri-series in Australia prior to the World Cup. If he is finally selected, what a fairytale it would be for a man whose sorry face during the presentation ceremony of 2014 T20 World Cup final is still fresh in memories of every Indian cricket fans! 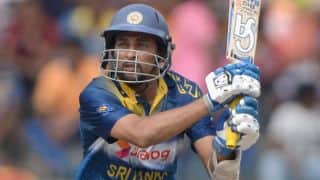