November 9, 1990 witnessed one of the longest scorecard entries in First-Class cricket. Abhishek Mukherjee recollects a dismissal that had probably led to a problem or two on the score-sheets.

Though he never played a Test, Karumanaseri Narayanaiyer Ananthapadmanabhan was easily Kerala’s greatest cricketer. He had the misfortune of being a leg-spinner whose career clashed with Narendra Hirwani before Anil Kumble came along. However, he finished with all sorts of records for Kerala that still stand (by a margin).

For example, Ananthapadmanabhan had 310 wickets for Kerala (the next-best is 239) that included 23 five-wicket hauls (the next is 14). Only 5 times have a Kerala bowler taken 3 five-fors in a season, of which 4 records belong to Ananthapadmanabhan. There is more, but this article is not about the bowler’s exploits.

His elder brother by two years, Karumanaseri Narayanaiyer Balasubramaniam, did not attain legendary status, but was a hard-hitting opener who did a competent job, especially in the fifty-over format. Andhra captain Vankenna Chamundeswaranath, on the other hand, was a decent batsman who sometimes rolled his arm over.

Prathattil Thekkettil Subramanyan, the Kerala captain, put Andhra into bat. Kerala struck early, but Vinod Kumar and Fasse-ur-Rehman put up a solid partnership. The score read 206 for 4 when Chamundeswaranath emerged from the pavilion. He scored 2. Then it happened.

Chamundeswaranath caught Balasubramaniam bowled Ananthapadmanabhan sounds a rather impressive scorecard entry. To add to the fun, the dismissal took place at Visakhapatnam (in the Indira Priyadarshini Stadium). It is probably the longest surname-only entry on a scorecard in the history of First-Class cricket.

The scorers should thank their stars that they did not need to log in the full names of cricketers during matches. Perhaps the most anticlimactic aspect of the dismissal was Chamundeswaranath’s score. In Amazing & Extraordinary Facts: Cricket Brian Levison later wrote: “all that for 2!”

Chamundeswaranath livens up the match

A hundred from Vinay Kumar took Andhra to 420. Ponnai Sundar led the Kerala rearguard, scoring 125 and keeping the deficit to 74. With an hour or so left in the match there was no chance of the result — before Chamundeswaranath surprised everyone by forfeiting Andhra’s second innings.

Kerala needed 75 from 13 overs. Subramanyan shuffled the batting order, sending in Rasheed and Bhaskaran Ramprakash. Though Rasheed fell early, Padmanabha Ranganathan walked out and helped Kerala chase the target down with 10 balls to spare. As a result Kerala earned 11 points from the match while Andhra got a mere 4. 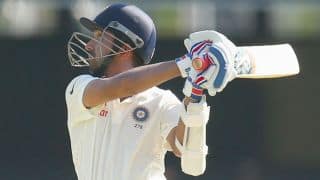