Cricket did crop up in the work of Charles Dickens many a time.

We have documented the cricketing connections of Charles Dickens elsewhere. In this article Arunabha Sengupta relates a curious link between the noble game and the great writer s final, unfinished novel.

Cricket did crop up in the work of Charles Dickens many a time. I have written about that elsewhere in some detail.

How Alfred Jingle of Pickwick Papers claims to have played a game in West Indies, beside a ground where a grand match was being played between All-Muggletonians and Dingley Dellers.

How Dickens wrote a little brochure titled Sunday Under Three Heads under the pseudonym Timothy Sparks, where he spoke out eloquently against the call for rigid enforcement of the Sunday Observance Law, voicing that there could be no moral objection to a game of cricket after church.

How Barnaby Rudge is described thinking within himself that the smell of the trodden grass brought back his old days at cricket when he was a young boy and played on Chigwell Green.

How in Bleak House the readers are taken to a meadow by the cheerful town where cricket players are assembling in bright groups.

How James Steerforth, the charismatic friend of David Copperfield, later the seducer of Emily, is described as the best cricketer you ever saw . David Later recollects many a summer hour he had known to be but blissful minutes to Mr Dick in the cricket field.

And how we are moved to tears when we read about the death of a child with a bat leaning against his bed in The Old Curiosity Shop.

There is also a faint hint of cricket in one of the Christmas Stories.

There are also objects and events discussed using cricketing metaphors.

The first tour of an English team to Australia also took place because of the indirect influence of Dickens. When he refused to go on a reading tour to the Southern Land, the organisers asked HH Stephenson to lead an English cricket side to Australia as a replacement event.

In the Memorial gallery at the Lord s cricket ground, we come across a famous oil painting, formerly the property of Sir Jeremiah Colman. In it Dickens is depicted bowling the first ball in a charity match, in the meadow behind his final home at Gad s Hil Place, near Rochester.

While the cricketers are in white, Dickens, like the umpires, is dressed in black and is in the process of sending down an underhand delivery. It is dated September 16, 1868, roughly two years before the death of the writer. The fielding side is shown raising their handkerchiefs in synchronised cheer.

We do have enough evidence to believe that Dickens was likely to have been a regular figure at the matches played at Gad s Hill.

In fact, when charity matches were on at Gad s Hill, Dickens allowed William Stocker Trood, landlord of Sir John Falstaff Inn and Treasurer of the Club, to open a drinking booth at his home.

This William Stocker Trood was later adapted to Edwin Drood in his last novel.

The Mystery of Edwin Drood, however, lived up to its name, and was slated to remain an eternal mystery. The most popular novelist of England suffered a stroke and died at Gad s Hill Place with the fate of Edwin Drood as yet incomplete. 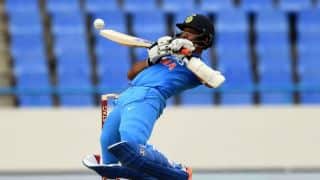