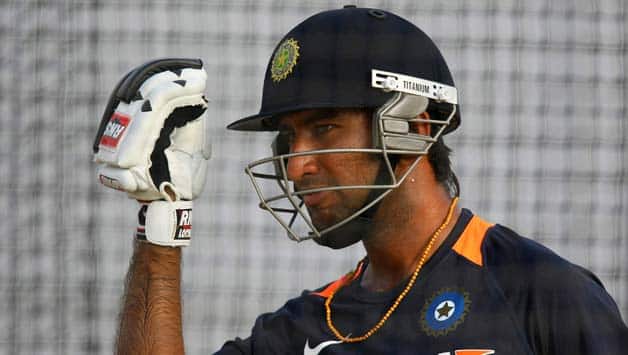 For someone who has been labelled as a player for the longer formats, a strike-rate of 107.44 is terrific. These numbers show that Cheteshwar Pujara has been a good one-day player and the stereotypes have been unfair on him. With such figures, he certainly deserves an ODI call-up © Getty Images

The wobbly Indian batting is in desperate need of some solidity. The famed batting line-up has been rattled by the Pakistan bowling in both the One-Day Internationals (ODIs) as they wilted under the pressure. A statistical study would reveal that they haven’t done badly individually in the last twelve months, but have failed as a unit. To hold them together, they need a player who would bind them like glue. Cheteshwar Pujara could be the man as he has proved himself in Test matches and one-day cricket awaits his arrival.

Stereotypes are often dangerous, and that could be true in Pujara’s case, who has been labelled a Test player. However, his records would prove that he is more than an effective player in the one-dayers. His List A record is fantastic and it shows that he is prolific even in the shorter format.

An average of 56.97 shows that he has been remarkably consistent and that run has prolonged over 61 matches. A look at his recent scores in domestic one-day cricket presents a stronger argument. His last List A assignment was the Challenger Trophy and he enjoyed a brilliant run there. Here are his returns from that tournament.

For someone who has been labelled as a player for the longer formats, a strike-rate of 107.44 is terrific. These numbers show that Pujara has been a good one-day player and the stereotypes have been unfair on him. With such figures, he certainly deserves an ODI call-up.

In a recent Ranji Trophy game, Pujara uncorked an innings that had shades of T20 cricket. During his double hundred against Madhya Pradesh, he moved from 150 to 200 in only 17 deliveries. That shows that he can attack when needed and has the ability to pick the gaps.

Pujara is technically very sound and can provide stability to this line-up. Like Rahul Dravid, he can be the dependable force who would bring some serenity and calm in the middle. Dravid too managed to score at a good-rate as his career progressed after an initial struggle. With a lot of emphasis on strike-rates in the modern era, Pujara may not require time to adjust as he has played with that mindset in limited-overs games.

It is perhaps his inability to succeed in the Indian Premier League (IPL) that has led to people calling him a Test player. The T20 league attracts much more eyeballs compared to the domestic one-day tournaments. Thus, Pujara’s consistency in such tournament is often eclipsed by some of the feats of the other Indian cricketers in the IPL.

Despite that, Pujara remains confident of overcoming the hurdles. In an interview with CricketCountry’s Karthik Parimal in July 2012, he said, “Of course, performance in the IPL is important. Some of the best players feature in it and you get to test yourself against them. Most people think I am a Test player, but I’ve scored a lot of runs in the One-Day format as well. I’ve got a few opportunities in T20 but I know I didn’t make full use of them. However, I’ve learnt from my mistakes and can apply myself better hereafter. I believe I can play any format and adapt accordingly.”

Watching him bat gives one the impression that he strictly adheres to the copybook and follows its principles to the hilt. However, in a conversation with this writer, he said, “I believe one has to be innovative at times. My strength is to play the ball according to its merit, but that doesn’t mean I will not attempt innovative strokes. I will continue to back my strength. Also, there is a way to hit a six. I strongly believe lofted shot down the ground can get you six, so can a risky one.”

Now, Pujara may not be as flamboyant as a Virat Kohli or a Rohit Sharma, but with his talent and temperament he can make up for it. Yes, style is good, but substance is what matters. At the end of the day a player must win games for his team and score runs in that regard. Kohli has done that with panache and even with all the talent in the world, Rohit is yet to produce consistency.

Recent reports suggest that the selectors may give Pujara an ODI call-up and it might come at the expense of Gautam Gambhir or Virender Sehwag. Keeping the 2015 World Cup in mind, it makes sense to give him a call-up now. If he succeeds, he will have two years to establish himself in the blue jersey and would be well settled in the line-up. The ball is now in the selectors’ court when they sit to pick the side to face England.