Cheteshwar Pujara deserves another chance in Indian ODI side

Cheteshwar Pujara deserves another chance in Indian ODI side

Runs were at a premium on difficult tracks of Bangladesh.

Cheteshwar Pujara did not have the best of times during the ODI series played in Bangladesh. This was seen as a chance for him to make inroads into the limited-overs team against relatively easier opposition. But seeing how the series panned out, one cannot say that Pujara’s chances have disappeared. Shrikant Shankar believes the Test specialist must be given another go in the Indian ODI side.

With only 38 runs in three innings, a top-order batsman cannot say that he had a great series with the bat. The average was a meagre 12.66 and the strike-rate was 37.25. These are not numbers to suggest that anyone had a good outing in a One-Day International (ODI) series. But India’s recent tour of Bangladesh was anything but a run-fest. The two teams were struggling to even get to three-figures during the three-match ODI series. While the seam and swing bowlers had a gala time in the conditions, the batsmen had a forgettable time.

The above numbers are Cheteshwar Pujara’s from the series. While he is seen as India’s best Test batsman currently, he isn’t yet a regular member of the ODI squad. The shortened tour to Bangladesh gave an opportunity to many fringe players to show their mettle in the international arena. All the big guns were rested and this was always a series to test out the others. Many bowlers took full advantage of the bowler-friendly conditions at Mirpur — the venue for all the three ODIs. The batsmen struggled throughout.

Pujara has now played five ODIs for India — two against Zimbabwe and three against Bangladesh. His record reads 51 runs at an average of 10.20. His strike-rate is 39.23 with a highest of 27. On no basis would the selectors think that such numbers warrant more call-ups. But Pujara has shown the world what he can do in the longest form of the game. His records are as good as any after the number of matches he has played. Someone who can score that heavily in Test cricket cannot be horrible in ODIs.

His lack of mobility in the field is seen as one of his ODI deterrents. But now with a poor series with the bat, there are more factors against, rather than for, Pujara making the Indian ODI squad. One would even say that he has played against relative minnows and not got the runs. Playing against the major teams would be much more difficult. But no one can deny Pujara’s technique and temperament to grind out and bat for long periods. He proved this in the third ODI, where he played for 63 deliveries in trying conditions to score 27 runs.

The next assignment for Pujara is in the white flannels, as India tour England for a five-match Test series. He is seen as one of the most important players if India are to win the series away from home. But after that the ODIs and Twenty20 Internationals (T20Is) will follow. Playing Pujara in the T20I team is probably not the best option, but the ODI team could still use his abilities. Not all pitches and conditions will favour the big-hitting batsmen, where there are better players than Pujara. But if there are pitches that need batsmen to grind out an innings, then Pujara is better than most.

One does not expect Pujara to walk into the Indian ODI XI, but he does deserve another shot to be there in the squad. A Bangladesh series where runs were at a premium cannot be taken as a factor in keeping Pujara out of the Indian squad. 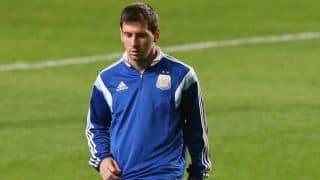 Zimbabwe's tour of Pakistan cancelled due to lack of funds