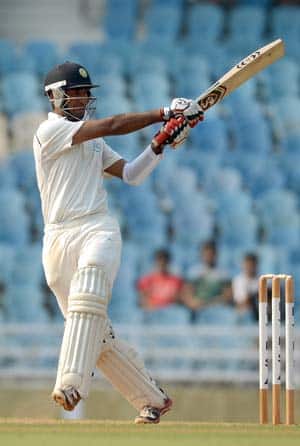 In the aftermath of Rahul Dravid’s retirement, it is Cheteshwar Pujara who is hailed as his successor and India look to him for solidity © AFP

Cheteshwar Pujara scored his second triple hundred in First-Class cricket ahead of being called up for the One-Day International against England. According to noted statistician Mohandas Menon, the triple hundred was Pujara’s fifth in various forms of cricket – one at under-14 level, two at under-22 level and two in Ranji Trophy.

On the cusp of donning the blues, he has helped himself to good rhythm and it should hold him in good stead ahead of the series against England.

At the tender age of 12, Pujara’s appetite for big scores was evident. Three days short of his 13th birthday, he smashed a triple century for Saurashtra under-14s in the National U-14 tournament. In a conversation with this writer in August 2012, Pujara recalled that knock and said, “In my debut game for Saurashtra at the Under-14 level, I scored a triple hundred and it just took off from there. From that point onwards, I have been consistent at Under-16 and the Under-19 levels. But, that triple hundred was a major development. As a young boy, it gave me tremendous belief that I could make a career in cricket and become successful.”

Pujara made his First-Class debut in 2006 and has translated that promise into results. With the double hundred against England in November, he showed that he is ready to replicate that at the highest level. In First-Class cricket, he already has six scores of over two hundred, including two triples.

The latest knock of 352 is his highest score in First-Class cricket. However, what is interesting is that the last two scores in the table have come in the last two games. What’s most amazing is his strike-rate. In the game against Madhya Pradesh, his strike-rate was 91.85. During that innings he moved from 150 to 200 in only 17 balls.

In his early days at the highest level, Pujara wasn’t quite lucky as he missed out on a lot of games due to injury. It is good to see him get back to his prolific ways and he realises that he needs to capitalise on every opportunity he gets. In the aftermath of Rahul Dravid’s retirement, it is Pujara who is hailed as his successor and India look to him for solidity.  If he can combine that with his controlled aggression, the Indian team would discover a very effective one-day batsman. The selectors have visualised that potential and have awarded him with the call-up.