CK Nayudu hits a ball from Warwickshire to Worcestershire

CK Nayudu hits a ball from Warwickshire to Worcestershire

August 5, 1932. It had been over five years since CK Nayudu had clobbered an MCC attack at Bombay Gymkhana to race to a 100-minute 153 with 11 sixes. By now a Test-playing nation, India were making their first tour to England. It was the first time that England got a view of Nayudu — a man whose towering sixes were as humongous as any in the history of the sport. Here, as India were struggling to save a tour match at Edgbaston, Nayudu launched an onslaught on the hosts in a way only he could. During his innings he also hit an outrageous six that crossed the county border and landed in Worcestershire. Abhishek Mukherjee re-lives the stroke and the day.

CK Nayudu was 36 when India made the 1932 tour to England — one that would include the first Test in their history. As the Maharaja of Porbandar (captain) and KS Limbdi (vice-captain) both stood down for the Test — both were, to their credits, aware of their limited cricketing abilities — Nayudu became India’s first Test captain.

Though India lost the Lord’s Test by 158 runs, they had certainly not disgraced themselves: they reduced England to 19 for 3 in the first morning, and later 166 for 6, before bowling them out for 259. Mohammad Nissar and Amar Singh had impressed all and sundry.

Edgbaston never enjoyed the status of Lord’s or The Oval. By the time it was built in 1885, Tests have already been played at Lord’s, The Oval, and Old Trafford. Of the big six grounds, Edgbaston was the last to host their first Test — as late as in 1902.

However, it served as Warwickshire’s home ground, and it was here that Nayudu elected to bat.

The Indians had an excellent start as Naoomal Jaoomal (72) and Wazir Ali (45) took the score to 129 for 1. George Paine then intervened with his left-arm spin, tearing the heart out of the Indian line-up: he dismissed Wazir, Nayudu, Nazir Ali, and Sorabji Colah.

India were 199 for 7 when Amar Singh (57) took charge, playing an outrageous blinder. He was supported by Shankarrao Godambe; the pair put on 49, and India eventually finished on 282, Paine rounding things off to finish with 5 for 110.

Warwickshire were reduced to 63 for 3 in the first evening, but Bob Wyatt (83) and John Parsons (53) added 129 to bring them back in the fight. Norman Kilner (60) and Hal Jarrett (45) put up further resistance down the order, taking the lead to 73. Godambe, introduced as sixth bowler, had 4 for 64 with his medium-paced bowling.

Once again India had a decent start, reaching 55 for 1 before the collapse started. They lost two men on 55 before stumps, and were 91 for 7 on Day Three. The lead was a mere 18 when Nariman Marshall, who had scored 67 runs from 6 innings on the tour till then, walked out to join The Colonel.

Nayudu knew there was only one way to go about it: he took it on. The attack consisted of two Test players in Wyatt and Paine, along with leg-spinner Jarrett and the seamers, Reg Santall and the debutant Albert Brown.

Edgbaston is by no means the smallest of grounds. At 25,000, its capacity is next to only Lord’s among all English grounds. It was definitely not as much eight decades back, but it was still larger than most county grounds of the age.

Hurricanes are not an English phenomenon, but what Edgbaston encountered that day was a close approximation of it. Nayudu launched a furious assault while Marshall proved to be the perfect foil: to cut things short, the pair added 217 in 140 minutes.

Nayudu hit clean and big: the placement was clinical; and when he found one in the slot, the ball soared over the fence. His 162 came in a mere 3 hours — with 13 fours and 6 sixes. However, this article relates to a single shot, the kind of which has been unmatched in the history of cricket in England.

Before we delve into the shot, a small lesson on geography is perhaps necessary. Originating in Waseley Hills County Park, Worcestershire, the 23-km long River Rea enters Birmingham and runs by a square boundary of Edgbaston. It also acted as the natural boundary between Worcestershire and Warwickshire.

Nayudu’s eyes had probably lit up when he spotted one from Jarrett, and thumped it over square-leg. The distance from the pitch to The Rea was a whopping 73 metres (the same as the square boundary at MCG).

But that was the distance till the Warwickshire bank of The Rea. Nayudu’s hit cleared the river and over — straight into Worcestershire! It was the first — and remains the only — stroke from one county to another in First-Class cricket.

[Note: Some sources say the ball landed in (not the other side of) the river, which means it had probably still reached Worcestershire for all practical purposes.]

Marshall carried on with the good job after Nayudu became Jarrett’s fifth wicket. He took control of proceedings, keeping an eye on the clock. Nayudu waited till Marshall got to his hundred. While the gesture was a noble one, it also took up time; when he finally declared, Warwickshire were left to chase 273, and there was no way they would go for it. Jarrett’s 5 for 158 was his first five-for.

Nayudu gave short spells to Nissar and Amar Singh and did not bowl himself, allowing others to take over. This allowed Wazir Ali to pick up a rare wicket. The match ended with Warwickshire on 110 for 3 in 40 overs.

– The Rea Bank (capacity: 4,600) was built in 1950. In 1989 it was renamed Eric Hollies Stand. Following the reconstruction in 2003 its current capacity is 5,900. Given the height of the stands, making it to Worcestershire with a single shot now will need more than human efforts. Perhaps Chris Gayle could try. 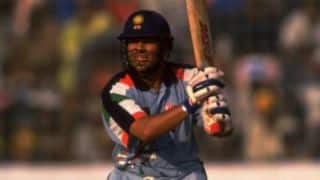 Highest ODI run-getters in each calendar year since 1971