December 26, 1937. Clarrie Grimmett and Don Bradman, though not exactly at hammer-and-tongs with each other, were not exactly the best of friends either. Omitted for the 1938 tour of England, Grimmett took revenge in his testimonial match by clean bowling the great man only to see it go all wrong. Abhishek Mukherjee looks at a bittersweet moment for one of the legends of the sport.

Clarrie Grimmett was great enough for Ashley Mallett to call him, albeit in a burst of exaggeration, the Don Bradman for bowling . Grimmett retired with 216 Test wickets, then a world record, after starting his career at 33.

Vic Richardson once said: We could have played any team without Bradman, but we could not have played the blind school without Clarrie Grimmett, though it must be remembered that Richardson and Bradman did not look at each other in the eye.

During his illustrious career, Bradman was troubled (if that phrase is applicable to The Don at all) by Grimmett as much as he was by anyone else. Arunabha Sengupta calculated that Bradman s astronomical First-Class average of 95.14 went down to a human 63.29 when he played against Grimmett.

The professional respect, of course, was there but they did not exactly have the kindest words for each other. In fact, Grimmett was blunt enough to tell Mallett Don Bradman was no good against good-length leg-spin in 1976. He was 84 then. Bradman, on the other hand, wrote I think I knew all about Clarrie, but with Hedley I was never sure in the preface to Hedley Verity s biography.

The flipper, the weapon invented and perfected by Grimmett, came to his downfall. Grimmett, a rank tail-ender and a remarkably ordinary fielder, had been overusing it, along with the googly. I don t think you can bowl a leg-break any longer, Bradman accused Grimmett. Grimmett was less penetrative than before, as per Bradman.

Bradman left Grimmett out of the 1936-37 Ashes. Bill Ponsford called his omission sheer lunacy . Chuck Fleetwood-Smith was preferred as O Reilly s partner. Bradman, impervious to the criticism, masterminded an amazing turnaround, helping Australia clinch The Ashes 3-2 after being down 0-2. It was off one of the greatest series wins of all time; and Grimmett never played another Test.

The Richardson-Grimmett testimonial match was scheduled to be a four-day affair starting on Boxing Day, 1937 at Adelaide Oval. The match was also supposed to be a Test trial of sorts, though Richardson and Grimmett, both having presumably past their careers, played the match.

Was Grimmett really out of contention for 1938? Here is what Mid-On wrote in Advocate (Burnie): The testimonial match in Adelaide will help to solve the problem as to whether Frank Ward will replace Clarrie Grimmett as the Australian right-hand googly expert for the English tour.

The teams, called DG Bradman s XI and VY Richardson s XI, were led by the respective men. Grimmett played for Richardson s team, as did Bill O Reilly another man who was not exactly on the best of terms with Bradman. Ironically, Jack Fingleton, perhaps the most vocal member of the anti-Bradman camp, opened batting for Bradman s team.

On Christmas Day, HW Hodgetts, Chairman of Committee in Charge of Testimonial Appeal, presented cheques of 1,025 each to Richardson and Grimmett amidst a drizzle. The money was raised during the past few weeks by public subscriptions from all parts of the State, other parts of Australia, and overseas.

Hodgetts also announced that there might be more donations coming in (other than the gate money). Richardson wanted to have a toss, the outcome of which would decide who would get to keep the money; Grimmett, perpetually the safe man, insisted the money be divided.

Both men were extremely popular, and to add to that, it was Grimmett s birthday (O Reilly once commented that Grimmett was New Zealand s best ever Christmas gift to Australia); a huge crowd was expected at Adelaide Oval next morning.

Both Hodgetts and Richardson had agreed that Grimmett, even at 45, seemed to be at his prime. In fact, Richardson went a stage ahead and complimented him with the words Clarrie seems to improve with age whatever that might be .

It was an extremely hot day with the mercury soaring to 39 C in the shade at 11.30 AM (it went up to 41 C by 3 PM). However, given the significance of the contest, a substantial turnover was expected. Adelaide Oval, after all, had seen a 40,000-strong daily crowd (as per an estimation by Sunday Times, Perth) during previous season s Ashes Test.

Jack Scott, one of the umpires, used to be a tearaway bowler for South Australia and New South Wales. He was notorious for intimidatory bowling and a bad temper (a spectator had barracked him during a grade match at Marrickville; Scott had jumped the fence to get him). Before the match Scott visited both dressing-rooms with a no-bumpers message.

Bradman, on winning the toss, sent Fingleton and Bill Brown to open. There was a huge cheer when Richardson brought on Grimmett second-change to partner O Reilly. Fingleton cover-drove Grimmett for four, and the first over went for six.

The pair batted solidly, and scored 43 in the first hour, Fingleton outscoring Brown by 29 to 14. The score read 64 without loss at lunch. When play resumed, Fingleton tried to leg-glance Ernie McCormick; the ball flew at a shoulder-high level; and Bert Oldfield flew to his left to come up with a spectacular catch.

Bradman walked out amidst tumultuous cheer. He started with an off-drive (it was yet another McCormick no-ball) and a pull for fours. Grimmett beat his bat. Bradman stepped out to the next ball. Grimmett beat the bat, only to hit Bradman on the pad. Bradman responded by stepping out and dismissing him past mid-wicket. One could sense the tension building up between the duo as more people walked in through the gates.

McCormick gave way to O Reilly. The fielders, especially Richardson and Stan McCabe, crept in closer. Brown played it out. Even an O Reilly over seemed an eventless interlude between two Grimmett-Bradman contests.

It was over to Grimmett again. He had a point to prove against the greatest batsman of all time the man who was responsible for dropping him, the man who had accused him of losing his leg-break.

Grimmett tossed it up. The Argus reported: He went forward to pull a ball with that not-so-straight-bat shot he uses so often, but the ball, cleverly flighted, dropped shorter than expected, and Bradman missed, the ball just disturbing the bails. Had the wickets been missed, Oldfield must surely have stumped him.

Grimmett had removed Bradman for a mere 17 with a leg-break. He was ecstatic, and justifiably so. He cried, rather audibly, to Richardson: That ll teach him I can still bowl a leg break. The Don was certainly within an earshot.

Richardson, for once, was not happy to see the back of Bradman, for he had other things in mind. Clarrie could be counted on to realize how his bread was buttered his bread and my bread, were the thoughts on his mind, as recounted to David Mortimer.

To quote Mortimer from Classic Cricket Clangers, Richardson s reply was on the pithy side. According to contemporary accounts, it contained some words which the dictionaries of the day had yet to record, and even Shakespeare might not have recognised.

Richardson calmed down after a while. I suppose you know you ve bowled us out of a thousand pounds? Grimmett apologised to Richardson; after all, it was a joint testimonial; but there was no doubt that he was elated. As Richardson would later recollect, the feat of bowling Bradman with so perfectly pitched a leg-break was sufficient reward.

Things turned worse as there was no play over the last two days. The gate money for 15,158 amounted to a mere 619. Though subsequent contributions raised the money to 1,143 apiece (in addition to the gate money), the leg-break had almost certainly robbed them of a thousand pounds each. 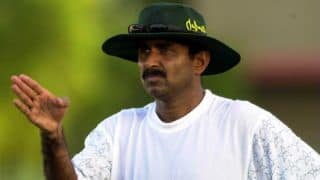 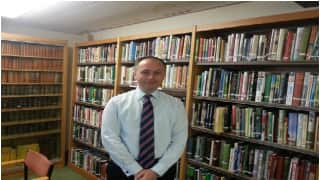 Interview: Neil Robinson — The Library and Research Manager at Lord’s