March 3, 1936. Clarrie Grimmett ended the series in South Africa with a haul of 13 wickets at Durban, bringing his tally in the series to 44. Strangely, this was to be his final Test match. Arunabha Sengupta recalls the way the little gnome-like leg spinner vanquished the South African batting. 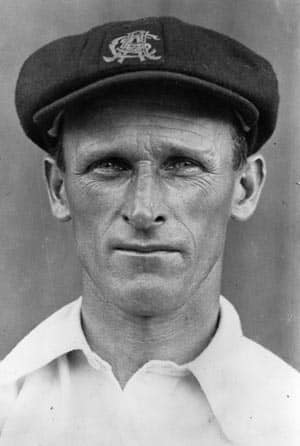 Glarrie Grimmett as he looked in 1932 © Getty Images

March 3, 1936. Clarrie Grimmett ended the series in South Africa with a haul of 13 wickets at Durban, bringing his tally in the series to 44. Strangely, this was to be his final Test match. Arunabha Sengupta recalls the way the little gnome-like leg spinner vanquished the South African batting.

Clarrie Grimmett arrived in Durban with figures of 10 for 88 at Cape Town and 10 for 110 at Johannesburg as the Australian juggernaut ran over the hapless hosts. In the series he had already captured 31 wickets in four Test matches as the sides met for the final game.

He was 44, and not too keen on proclaiming it. His cap remained firmly stuck on his head, even when he sent down his beguiling leg breaks, googlies and flippers. The headgear concealed the advanced stage of hair loss. Between them, Bill O’Reilly and Grimmett formed the greatest leg-spinning combination ever. And perhaps between them they had more Test wickets than hair on the head.

However, the South Africans, could hardly benefit from the sparse vegetation on the crown. Already 0-3 down in the series, they were more concerned with the varied offerings of relentless leg-spin from both ends that plagued them from the very first day.

The pitch offered little help early on, but the two leg-spinners tied the batmen down from the start. Led by the popular Vic Richardson, both Grimmett and O’Reilly were in excellent spirits. O’Reilly, fastish and accurate, was difficult to get away — although he bowled without much luck in the first innings. Grimmett was at his usual miserly best. Like the most exquisite of wines, he had matured with age into his finest vintage, with sting, kick and dizzying effects.

Six in the first

Captain Harby Wade was looking good when Grimmett lobbed one up and lured him into skying to mid-off. The dangerous Bruce Mitchell tried to turn to the leg and got a leading edge back to the bowler.

Jack Siedle and Dudley Nourse batted patiently, wading through the tapestries of spin, taking the score to 124 for two. And after resisting the tempting loop for several overs, Siedle finally gave in and lofted Grimmett to mid-off. Nourse, the best South African batsman of his day, had just brought up his half century when a flipper crashed into his pads in front of the wicket as he played for the turn.

The South Africans countered by switching to the ploy of going after Grimmett, mainly executed by Ken Vijloen and Robert Harvey. It did get them some quick runs and the scoreboard looked somewhat respectable once again. However, Harvey fell to Ernie McCormick and a short spell of showers halted the game.

Immediately on resumption, Chud Langton decided to continue the rough treatment. He jumped out and the ball beat him in pace, flight and turn. Bert Oldfield’s trusted hands whipped off the bails. Leg-spinner Xenophon Constantine Balaskas — who later mentored John Traicos during his formative years — could not be tied down to the crease even by the weight of his fantastic sounding Greek name. He reached out, was beaten by the turn and Oldfield did the rest. And the first ball Bob Crisp faced was too sophisticated for his limited batting ability. It pitched way outside the leg stump, and spun back with an evil gleam to hit the wicket.

South Africa finished the first day at 199 for eight, the gloom of another approaching storm bringing the proceedings to a premature end. Grimmett had taken seven.

The next morning McCormick took the other two, and Grimmett could not add to his tally. He finished with seven for 100 from 45 overs. O’Reilly went wicketless, bowling 37 tight overs for 59.

Seven in the second

The Australian batsmen enjoyed themselves during the next two days, plundering 455 runs. Although Don Bradman had decided to skip the tour, the batting was strong enough to toy with the limited bowling of the home team. Jack Fingleton struck a century, Bill Brown and Len Darling got solid fifties, Leo O’Brien and Vic Richardson made useful contributions.

South Africa batted again with day and a half still left in the game, a deficit of 233 staring at them. And there were spots on the pitch which were being keenly eyed by O’Reilly and Grimmett.

They started strongly enough with Wade and Siedle putting on 62, before the former was bowled by O’Reilly. Soon after the initial breakthrough, Siedle was taken at short leg off Grimmett. However, the two top batsmen of the hosts, Mitchell and Nourse, batted with a lot of application and at the end of the day 110 for two looked decent enough, with a remote chance of escaping with a draw.

On March 3, 1936, Grimmett walked out with 39 wickets in the series already in his bag. He started proceedings with McCormick, but with the batsmen watchful and later O’Reilly given the preferred end to bowl at the rough spots, he went without a wicket till lunch. His leg spinning colleague, however, pitched on a worn spot and made the ball do amazing things. Nourse was bowled off O’Reilly, going for a big hit. Grimmett was bowling accurately enough but without success. And when Arthur Chipperfield’s occasional leg-spin was tried from his end, the ball turned prodigiously, making Mitchell hurry his strokes. Mitchell and Vijloen saw South Africa through to lunch at 196 for three.

After the break, Grimmett was tried from the other end, and got Vijloen first ball. It was yet another flipper that had the batsman playing for turn and trapping him plumb.

Now, using that same worn spot as O’Reilly, Grimmett ran through the batting. Harvey played forward to one that turned square and went to Richardson in the slip off the edge. Langton prodded to a ball that pitched outside the leg, beat his bat and pad and hit the off stump.

Balaskas played out three maiden overs before edging another huge turner to Richardson in the slips. Wicketkeeper Edward van der Merwe played half cock at a turning delivery and was snapped up by the captain just two feet behind the wicket. Five wickets had gone down after lunch for 23, all to Grimmett. Mitchell fought on bravely, but O’Reilly got the other two quickly enough — both caught by Richardson at slip. The five catches by Richardson was a world record, to be equalled by Yajurvindra Singh in 1977.
Australia triumphed by an innings and six runs, winning the series 4-0. Grimmett’s final figures read 48-23-73-6, making it 13 for the match and 44 for the series. 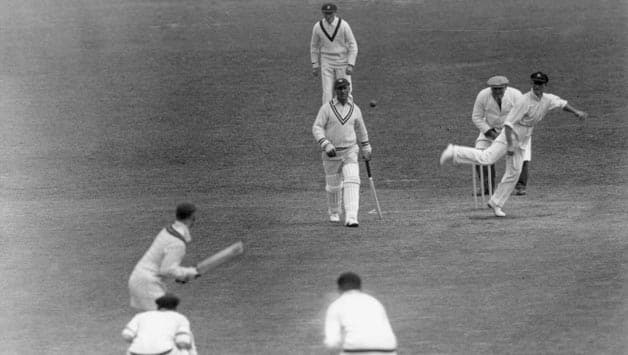 Cap firmly on his head, Clarrie Grimmett bowls against Essex at Leyton on the 1930 tour of England © Getty Images

For some peculiar reason, this was to be his last match for Australia. When the team was picked for the 1936 tour of England, he was omitted. The 44 wickets against his name were not considered, but the 44 that stood as his age had been taken into account. His worst fears had come true.

In an interview just before his death, O’Reilly accused Bradman of prematurely removing Grimmett from the team. Bradman had assumed captaincy of the Australians after the South African tour.According to O’Reilly, the unassuming little leg-spinner had paid the price of some frivolous comments about Bradman. Grimmett had supposedly said that the great man had  ensured his own dismissal in a match against Victoria to avoid facing the express pace of Ernie McCormick.

Even if the end was cruelly hastened, the 37 Tests that Grimmett played, capturing 212 wickets, showcased his lasting greatness to the world.