Clarrie Grimmett was the first bowler to 200 Test wickets.

Clarrie Grimmett, born December 25, 1891, was one of the greatest leg-spinners of all time and the man credited to have developed the ‘flipper’. Arunabha Sengupta remembers the ‘Gnome’ and his career on his 121st birthday.

His offerings down the wicket were full of the most devilish invention, but when he ran up the few paces to deliver them, he was almost bashful.

Seldom was his appeal for leg-before heard in the outfield, let alone ride the waves to reach the spectators. It was almost an apologetic enquiry for even the most straightforward of decisions.

He used to hustle through his overs on his almost dainty feet, as if in a hurry to remove his small frame from the spotlight as soon as possible. So much so, that once during a club match in Sydney the great Monty Noble barked at him, “D’you think you’re the only one playing in this game? Don’t you know there is a bowler on at the other end?” Clarrie Grimmett was confused at this sudden rebuke of the former Australian captain. It was explained to him that the one and a half minute overs were not allowing the fast bowler at the other end sufficient time to recover.

Yet, for all his briskness, the ingenuity in each of his deliveries seldom gave the greatest of batsmen any moment of peace. If Arthur Mailey, his predecessor as the great Australian leg-spinner, had the reputation of bowling as a millionaire, Grimmett was the most confirmed miser. He hated runs scored off him and only once in his career did he commit the cardinal sin of bowling a no-ball. Indeed, tidiness rather than turn was his weapon of choice. His variations were intriguing while his accuracy metronomic. He seldom beat the batsman with huge turn. He fooled them with subtle deceptive alterations while maintaining tantalising line and length. Hardly anyone witnessed him bowl a long-hop.

Most of the time for Australia, he bowled in tandem with the great Bill O’Reilly, the big leg-spinner with the spirit, action and scowl of a fast bowler. In contrast, Grimmett was almost self-effacing.

Throughout the days their great careers intersected, there was healthy competition and banter between the two great leg-spinners. O’Reilly’s aggression led him to be nicknamed Tiger while Grimmett’s small build led to the various aliases including Grum, Gram, Gnome and Fox.

O’Reilly’s brow, balding prematurely, glistened with sweat. Grimmett, in more advanced stages of hair-loss, always had his cap firmly fixed on his head — lest his bare crown betrayed the advancing years and made the selectors concur that he was too old. In the end, his fears turned out to be justified to a degree.

Indeed, Grimmett matured early enough, but played for Australia only when he was almost 34. He did not wait to settle in, but in his characteristic brisk way went about making up for lost time. His debut at Sydney in 1925 brought him five for 45 and six for 37 against England as he bowled his side to a 307-run win. His victims included Jack Hobbs, Andy Sandham, Frank Woolley, Patsy Hendren and Jack Hearne. Woolley was his first Test wicket, bowled by a googly in front of 40,000 spectators.

Eleven years later at Durban, he winded up his Test career with 13 wickets against South Africa. Only, having just scalped a record 44 wickets in the just concluded series, he did not quite know that his career had ended. Strangely, his worst fears had come true as the selectors had suddenly laid stress on his age — which stood at 44.

Nevertheless, the 37 Tests he managed to play brought him 216 wickets, at a scorching rate of nearly six per Test, at an average of 24.21; 143 of them came in the 20 Australian wins he was part of, and were captured at 17.60 and a phenomenal strike rate of 52.6. He became the first bowler in the history of Test cricket to capture 200 wickets.

Grimmett was born in Dunedin, New Zealand, and honed his skills by bowling in his backyard — after a master in school had gently advised him that he should stick to leg-spin rather than trying to bowl fast. His companion for his long hours of training was a fox terrier who retrieved balls with great vim and vigour, and could apparently count to six for the over.

The year the First World War broke out, Grimmett crossed the Tasman Sea and started playing club cricket in Sydney. It was at Melbourne that he received guidance from the great Jack Saunders and gradually made his way to the Sheffield Shield, playing for Victoria. 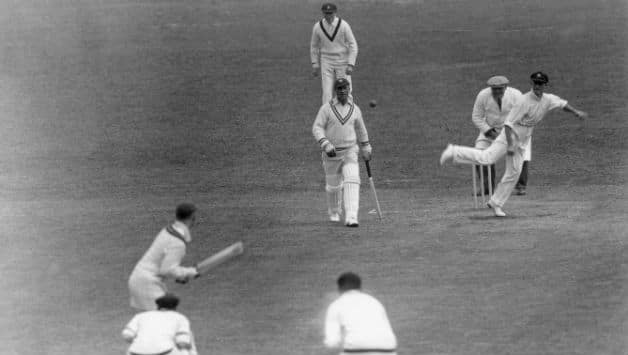 Clarrie Grimmett bowling with his cap on © Getty Images

While he excelled at the orthodox leg-break and the wrong ’un, his greatest contribution to the abstract art of leg-spin is probably the development of the flipper. Squeezed out of the front of the hand with the thumb and first and second fingers, this productive delivery was perfected by Grimmett through years and years of practice. No one could use the Magnus effect as did this little leggie. Extremely difficult to pick up from his action and hand, batsmen gradually started decoding his flipper from the snap of his fingers as he delivered it. Grimmett soon realised this and added a snap of the fingers of his left hand when he delivered the orthodox leg spin and googly.

Grimmett was so hooked to the flipper that once Don Bradman, batting against him, joked that he had forgotten his orthodox leg-break. That innings he bowled the Australian legend with a spinner that pitched on the great man’s leg stump and took the off bail.

Grimmett enjoyed success against every team he played, tackling the great batsmen of England on docile wickets with his mix of relentless accuracy, hard work and guile. However, he managed to make life miserable for the batsmen of the inexperienced West Indian and South African sides. His two series against the Springboks got him 77 wickets in 10 Tests, and his 5 Tests against the islanders earned 33 more.

Apart from the Bodyline series, he was successful in all the Ashes engagements as well. The supreme Australian success of the 1930 English tour had as much to do with his fantastic bowling feats on plumb wickets as with Bradman’s 973 runs. Grimmett was named a Wisden Cricketer of the Year in 1931.

A quiet man during most of his early tours, later camaraderie with O’Reilly and his mates proved that he was well-liked and affable. Late in his playing days, he confessed to O’Reilly that on previous tours he had been keeping the wrong company and had never really enjoyed a trip.

Before his death, in an interview, O’Reilly accused Bradman of prematurely removing Grimmett from the team. Bradman had assumed captaincy of the Australians after the South African tour in which Grimmett had achieved so much success. Apparently, the unassuming little leg-spinner had paid the price of some frivolous comments about Bradman ensuring his own dismissal in a match against Victoria to avoid facing the express pace of Ernie McCormick.

Even if the end was cruelly hastened, the 37 Tests that Grimmett played showcased his lasting greatness to the world. Apart from that, his 513 Sheffield Shield wickets in 79 matches will probably remain unmatched forever.

Sixteen years after his death, Grimmett was posthumously inducted into the Australian Cricket Hall of Fame in 1996 as one of the ten inaugural members.