By common consensus, four of the greatest all-rounders of all time played in roughly the same era: Imran Khan, Ian Botham, Kapil Dev, and Richard Hadlee. However, this Big Four should really have been the Big Five, with Clive Rice being the fifth. Sadly, South Africa’s apartheid ban stole a career that ought to have been a glittering one. Shiamak Unwalla looks at the numbers and tries to compare the five.

Five of the greatest all-rounders the game has ever seen were born within a decade of each other. Rice was born on July 23, 1949, Hadlee on July 3, 1951, Imran on November 25, 1952, Botham on November 24, 1955, and Kapil on January 6, 1959. This helps a comparison because the era in which they played was essentially the same, which means that a study of their numbers will produce a fairly accurate result. For instance, judging Sir Garry Sobers or Jacques Kallis against them is a slightly more challenging task given that they played in completely different eras and some of the variables might not be quantifiable.

Rice did not play Tests and played very little ODI cricket, so for his benefit let us look solely at First-Class and List A numbers of all five. To begin with, let us look at how they fared in terms of batting. Here is a table showing the First-Class batting record of all five, arranged in descending order of batting average:

Rice tops the charts in terms of both runs and average, both by a long way. He has by far the most centuries and fifties of the lot as well. However, that is not too shocking, given that the other four played a lot of Tests, where they would have inevitably faced stronger bowling. That being said, a lot of players have a higher Test average than they do a First-Class average; the most famous example is Don Bradman (Test average of 99.94, First-Class average of 95.14).

How about List A? Here is a table showing the List A batting record of all five, arranged in descending order of batting average:

Once again Rice leads the way. He is head and shoulders above the rest in terms of both runs and average, and has most centuries and fifties as well.  It is also interesting to note that in both First-Class and List A, the order of batting average remains the same: Rice, Imran, Botham, Kapil, and Hadlee, in that order. This shows some consistency, so it might not be too much of a stretch to imagine that Rice was indeed the best batsman of the lot, while Hadlee was the least accomplished.

Moving on to bowling, one can see an immediate shuffle in the order. Hadlee was undisputedly the best bowler of the lot, and the numbers reflect the same. Here is a table showing the First-Class bowling record of all five, arranged in ascending order of bowling average:

It is no real surprise that Hadlee’s numbers are overwhelming; his bowling average is just a shade above 18, which is almost unimaginable, and he took a mind-numbing 102 five-wicket hauls, along with 18 10-fors. However, do note that Rice’s numbers are outstanding as well. A bowling average of only 22.49 is tremendous, as is his strike rate of 52.2. The numbers suggest that he did not bowl as often or as much as the others, but when he did bowl he was more than efficient. It must have been a traumatising experience for batsmen across England when Rice and Hadlee turned up in unison for Nottinghamshire!

A look at the List A numbers tells a similar tale. Here is a table showing the List A bowling record of all five, arranged in ascending order of bowling average:

There is one change in the order, with Kapil dipping below Botham in bowling average. Hadlee remains comfortably at the top with an average of under 19 as well. Rice again has tremendous numbers, leading the way with 19 four-wicket hauls. He was perhaps the best batsman of the lot, but he was also more than potent with the ball. Imran ranks second in terms of both batting and bowling, and Hadlee is beyond doubt the best bowler, while Botham and Kapil were clearly capable of sparks of genius but lacked the consistency of the Imran and Rice.

Rice was born in the wrong country and the wrong era, but one can only imagine where he would have ranked among the pantheon of cricketing greats had he got the opportunity to do in international cricket what he did so seamlessly in domestic cricket. One thing is for certain; the cricketing world has lost a rare talent, the likes of which might not be seen for generations to come.

Rest in peace, Clive Rice. And thank you for your contribution to the sport. 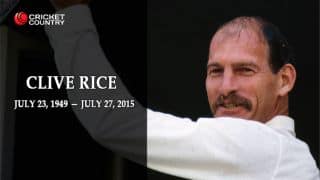 Clive Rice mastered cricket, but could not conquer time 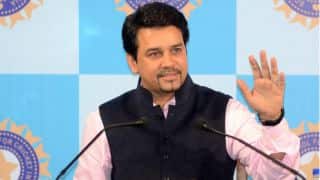 India coach decision to be taken prior to home series against South Africa, says Anurag Thakur