The Chennai Super Kings thrilled everyone at the JSCA Stadium in Ranchi with their four-wicket win over the Titans on Sunday. Suresh Raina and Michael Hussey scored a quickfire 47 each as Chennai chased down an imposing target of 186 with seven balls to spare. 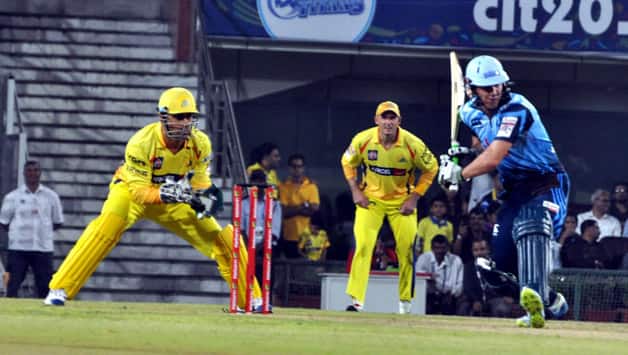 The Chennai Super Kings thrilled everyone at the JSCA Stadium in Ranchi with their four-wicket win over the Titans on Sunday. Suresh Raina and Michael Hussey scored a quickfire 47 each as Chennai chased down an imposing target of 186 with seven balls to spare. In a high-scoring match, there are bound to be a lot of good performances. Shrikant Shankar looks at some of the top individual performers from the match.

The Titans captain set the  foundation early on for the eventual big score. Henry Davids opened the innings for the South African side after they were put into bat on a flat wicket. The right-hand batsman scored 52 runs off 43 balls. He struck four fours and two sixes. Davids put together a 46-run opening stand with Jacques Rudolph. He then added 76 runs with AB de Villiers. He was dismissed by Ravichandran Ashwin, who bowled wide outside off-stump after seeing the batsman coming down the track. Davids missed, but MS Dhoni did not behind the wicket. Davids though conceded 23 runs in two overs during Chennai’s innings.

Royal Challengers Bangalore might not have qualified for the Champions League Twenty20 (CLT20) 2013, but someone like AB de Villiers has many more options to participate in a tournament like this. He was by far the best performer in the match. He scored a brilliant 77 off 36 balls, which included three fours and a whopping seven sixes. De Villiers looked in imperious form as he carted almost all the Chennai bowlers while at the crease. He was dismissed in the penultimate over as he mistimed a lofted straight drive off Ravindra Jadeja’s bowling. Dwayne Bravo took the catch at long-off.

Both Farhaan Behardien and Rudolph scored 21 runs-a-piece in the match. While Rudolph began the Titans’ innings in a quick manner, Behardien helped propel their score to 185 for five in 20 overs.

The left-hand medium-fast bowler was probably the best bowler on the day. Rowan Richards picked up three wickets for 29 runs. He dismissed Bravo, Dhoni and Jadeja, but his efforts went in vain as the other bowlers went for runs. It is a surprise that Australia forced this man into retirement. Donning another yellow jersey — Chennai’s jersey — Michael Hussey has been supreme. His records in all three formats of the game have been brilliant. The left-hander did not seem fazed by the daunting target nor after losing his opening partner Murali Vijay in the first over. Dhoni had said after the match that Chennai conceded far too many runs for their liking. Keeping all that in context, Hussey scored a brilliant 26-ball 47. He struck seven fours and one six. His 89-run partnership with Raina gave Chennai control of the match. He mistimed a lofted shot off Morne Morkel’s bowling straight to De Villiers at mid-off. One can expect far greater things from Mr Cricket in the tournament. After all not many outscore Chris Gayle in the Indian Premier League (IPL).

It was a close call as to who should get the Man-of-the-Match award between Hussey and Raina. Both scored 47 runs. Raina’s came in 28 deliveries. But it was Raina who got the award in the end. His weakness against the short ball is well known and the Titans bowlers targeted him with many bouncers. But he seems to have worked on that. He hit five fours and two sixes. He chipped a slower delivery from David Wiese to mid-off, where Morne Morkel took a simple catch.

If Chennai are blessed with IPL 6’s highest scorer, they also have the highest wicket-taker in their ranks. Dwayne Bravo sort of derailed the Titans innings in the 18th over as he picked up two wickets in three balls. That might have cost Titans a good 10-15 runs lesser. Then while chasing, he came in at a tricky situation as Chennai had lost both Rain and Hussey. The score at the time was 114 for three after 10 overs. He added 58 runs with Subramaniam Badrinath for the fourth wicket before being dismissed in the 17th over. Bravo scored 38 runs off 26 balls which featured four fours and two sixes. By the time he got out, Chennai were in a good position and eventually went on to win the match by four wickets. Chennai look a really strong side once again and if all their star performers perform, then there is a very good chance they might win the tournament for the second time.

Alistair Campbell: The Zimbabwean captain who led them to their first Test series triumph