It was Mitchell Marsh once again who came to the rescue with the bat as he made 63 not out.

Perth Scorchers beat Lahore Lions in the penultimate match of the group stage of the ongoing Champions League Twenty20 (CLT20) by three wickets. It was Mitchell Marsh once again who came to the rescue with the bat for the Scorchers as he struck a stroke-filled 63 from 38 balls to defy the Lahore attack that was making early inroads during Perth’s chase of the 125-run target. Amit Banerjee sheds some light on the highlights of the match.

The Paris and Marsh show: Joel Paris and Mitchell Marsh opened the bowling for the Scorchers, who won the toss and chose to field. The duo then went on to tear the Lahore top-order apart with a superb display of seam-bowling, using the conditions well to keep the batsmen on the backfoot. Lahore were reeling at 11 for the loss of four wickets, a clear-case of self-destruction which they last displayed in the qualifying match against the Northern Knights.

Nasim’s defiance: Saad Nasim continued his good form in the tournament with a quickfire knock of 69 from 55 balls in an innings that contained seven fours and a six. He formed partnerships with Umar Akmal and Mohammad Saeed worth 43 and 48 runs each. Though he managed to save some grace for the Pakistani side, the total of 124 in 20 overs was not good enough and a lot of responsibility was on the Lahore bowlers to win the match for their team with a margin of 47 runs in order to qualify.

Lahore give a fitting reply: The Lahore Lions attack did to the Perth batsmen what their batsmen had to face in the initial stages of their innings. Mohammad Hafeez, who was reported for a suspect action by the umpires in an earlier match, and Aizaz Cheema ran through Perth’s top-order and middle-order. Hafeez and Cheema were soon joined by Mustafa Iqbal, who took a couple of wickets himself. At the time of Yasir Arafat’s run-out, the Perth score read 62 for the loss of seven wickets, and the Western Australian side looked likely to be shot out for a total below 80, giving Lahore their much-needed edge ahead of Chennai Super Kings (CSK) in terms of the net run-rate.

Marsh to the rescue once again: Mitchell Marsh’s heroic innings of 40 from 26 balls had guided Perth to a victory over Dolphins earlier in the tournament, and the young batsman was expected to play a similar role when Perth were in the middle of a panicky situation against Lahore. Marsh fulfilled all such expectations, that too in style. his innings of 38-ball 63 stole the show away from the Lahore bowlers who had bowled their heart out in the initial stages of the Perth innings. He formed a life-saving 68-run partnership with chinaman bowler Brad Hogg. Marsh struck two consecutive sixes in the final deliveries of the 19th over to guide Perth to a hard-earned victory. 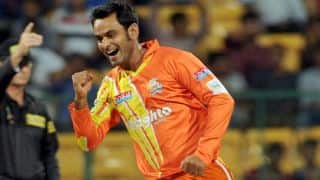 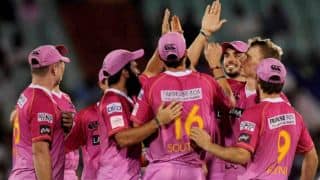 CLT20 2014: It was a disappointing finish for Northern Knights, says Tim Southee