Here are the top five bowling performances of Champions League 2014.

The Champions League T20 (CLT20) 2014 gave us some outstanding battles between bat and ball. There were some belligerent innings, and some decisive spells that changed the fate of some encounters. Shiamak Unwalla lists out the five best bowling performances of the tournament.

When a team scores 151 runs in 90 balls, they are usually considered to be in a very safe position. Lahore Lions did just that; albeit in 20 overs. If that seems confusing, it is only because between Sunil Narine and debutant Kuldeep Yadav, Kolkata Knight Riders (KKR) bowled as many as 30 dot balls — equal to five overs. What that meant was that Lahore Lions’ final score of 151 for seven was scored effectively off just 15 overs.

Narine was at his miserly best. He flummoxed and got rid of three Lions’ batsmen in five balls, while confounding the others sufficiently well to end with enviable figures of three for nine in his four overs. That KKR chased down the target by just four wickets in the final over after being 100 for no loss was their own fault.

It is not often that a spell of two for 17 is a match-winning one in any form of cricket. In the context of this match, however, it was nothing short of a miraculous spell. In a match where eight out of the 13 bowlers who bowled went at over 10 runs per over, Bravo’s economy rate was just 4.5; the next most economical spell was bowled by Daryn Smit, who bowled two overs for 17 runs.

Chasing Chennai Super King’s (CSK’s) 242, the Dolphins were off to a thunderous start as Cameron Delport blitzed 34 off just nine balls. His opening partner Morne van Wyk did a good job at the start too, scoring 17 off seven deliveries. Cody Chetty and Vaughn van Jaarsveld were looking good, as both men crossed 30. However, Bravo knocked them over in quick succession. His slower balls proved decisive on the pitch, as one after the other Dolphins batsman failed to read them. He restricted the batters, and helped CSK to a remarkable 54-run win.

The young Chinaman bowler had impressed with his variations and control on debut against Lions. Against Perth Scorchers he was the one who turned the innings on its head. With Craig Simmons and Adam Voges blasting away at one end, Gautam Gambhir turned to the young left-hander to get a breakthrough.

Kuldeep responded by enticing Simmons to leave the crease before Uthappa stumped him. Mitchell Marsh was soon on his way as well, drawn out of the safety of the crease and missing the ball; Uthappa did the rest. His third wicket was the dangerous Nathan Coulter-Nile, out slogging to the deep for a first-ball duck. KKR restricted the Scorchers to a manageable 151, and chased it down in the final over.

Cobras batted first, and got off to a blazing start. Richard Levi and Hashim Amla added 60 in under seven overs before the latter fell to Karanveer Singh. Regular wickets after that kept halting the Cobras after that.

Akshar was at his stingy best, restricting the batsmen with his usual accuracy. He ensured that the Cobras were never able to build partnerships, getting rid of Sybrand Engelbrecht, Justin Kemp, and Vernon Philander early. His spell of three for 15 meant that the Cobras could score no more than 135, which was duly chased down by seven wickets.

CSK and KKR had a lot of history leading up to the final. KKR had triumphed in their opening match after Andre Russell’s bombardment stole the match from under CSK’s nose. This time, the Super Kings were out for blood.

Batting first, Gautam Gambhir and Robin Uthappa added 91 runs for the first wicket before Uthappa walked out off Negi, but was beaten in the flight and stumped. Jacques Kallis joined him soon, caught by Ashish Nehra at covers.

Then, in the crucial 19th over, Manish Pandey then gave catching practice to the man at long-on, before foxing Ryan ten Doeschante with a slower ball that spun out of his reach; Dhoni did the rest and Negi had four. His fifth victim was Suryakumar Yadav, reverse-slapping one to short third man. KKR, after promising a 200-plus total, had fallen well short at 180. Suresh Raina’s sensational ton ensured that CSK won their second CLT20 title, and halt KKR’s 14-win streak. Negi’s five for 22 are the best figures in CLT20 as he bettered Azhar Mahmood’s five for 24. 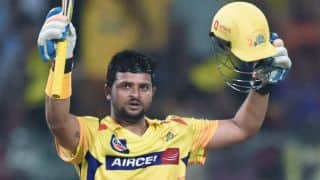