With his scholastic background, Rex Alston was clear, accurate and very much 'on the ball during his many years of covering Test matches. Arunabha Sengupta recalls the commentator whose calm sanity balanced the idiosyncrasies of the likes of John Arlott and Brian Johnston. 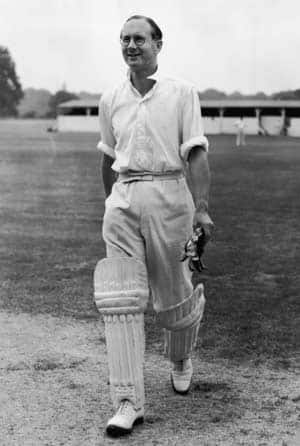 Rex Alston returns to the pavilion after his innings in a charity cricket match between a team of London footballers and a side led by cricketer Alf Gover at Richmond Athletic Ground on July 13, 1949 © Getty Images

With his scholastic background, Rex Alston was clear, accurate and very much ‘on the ball’ during his many years of covering Test matches. Arunabha Sengupta recalls the commentator whose calm sanity balanced the idiosyncrasies of the likes of John Arlott and Brian Johnston.

During a splendid dinner to celebrate 60 years of BBC’s Outside Broadcasts in 1985, Rex Alston collapsed and fell. The next day in his obituary in The Times, John Woodcock wrote “Rex Alston, who has died at the age of 84, was a sports commentator with a pleasant courteous style and versatility seldom seen today.”

No one had any bones to pick with the description except perhaps Alston himself, who had the transcendental experience of being shown his own obituary by a nurse while recuperating at the Westminster hospital, and commented that it was both humorous and exaggerated.

In 1986, he married for a second time – perhaps the only man whose death and marriage were reported by The Times in that order!

But, this was not his only claim to fame.
Sportsman, schoolmaster and commentator

Born in 1901, Alston was quite a sportsman himself. A Cambridge Blue in athletics, he captained the Bedfordshire County Cricket Club in 1932, and played on the wing for Bedford and Rosslyn Park rugby clubs.

He had been a schoolmaster at Bedford School from 1924 to 1941, before joining the BBC as a billeting officer. Soon, though, his voice – a clear, light baritone – was discovered, and he was considered too good to be wasted in an administrative role.

His all-round sporting abilities translated themselves into the broadcasting profession as well, making him cover athletics, rugby and tennis alongside cricket, including events of the stature of Wimbledon and the 1956 Olympic games. It was, however, as a Test match commentator that he continues to be remembered most fondly.
Talking through sun and rain

His first stint with cricket was during the Victory Tests of 1945, when he accompanied Howard Marshall to see how ball by ball commentary was carried out. When the busy Marshall was summoned to London for an important meeting, Alston was thrust into the hot seat. Some of his commentary from that series, such as the description of debonair Keith Miller’s hitting at Lord’s, fortunately survives to delight the aficionado.

By the late 1940s cricket broadcasts had become enormously popular. With Howard Marshall moving on to things grander than cricket, Alston joined forces with John Arlott and EW ‘Jim’ Swanton to become one of the most popular broadcasting teams ever. Brian Johnston, till then experimenting with television commentary, joined them a while later.

Seymour de Lotbiniere, the BBC director of Outside Broadcasts, had already combined with Howard Marshall to lay down the defining principles of running commentary – which remain more or less unchanged to this day. But, back in those days, other standards, such as what to do in the case of stoppages, were still in their infancy.

Alston recalled: “We had 15 minutes before the first ball was bowled at half-past eleven in one of the 1948 Tests. It was a nasty, cloudy day and we (Alston and Arlott) started talking – we went on talking and the umpires came out, had a look at the sky and walked back again and the covers came out. All this took a lot of time. There were five minutes or so and then the covers were removed and the umpires went out again, had a look and came back again. And we were still trying to talk. We had no idea what we ought to have done, partly because this was the first time we had done ball by ball commentary back to Australia, so in a sense we were serving more than one master. Anyway, I was wearing headphones, and suddenly there was a frustrated voice coming up the line from Broadcasting House: ‘For God’s sake get back to the studio.’ Which we did!”

Within a couple of years, however, he was seasoned with the microphone. In 1950, when the West Indies won their first victory in England at Lord’s, Alston described the scenes of jubilation:  “One or two West Indian characters coming out on the field, waving their hats . . . Goddard running in . . . being chased harem scarem by lots of West Indian supporters. Such a sight never been seen before at Lord’s.”

Perhaps because of his unpleasant brush with the rain in 1948, within a few years Alston started preparing programmes looking back at past Test matches, using archived material to fill in the gaps caused by rain. Along with Lotbiniere, he laid the foundations of cricket talks, which later went on to become Test Match Special.

When this immortal tradition of English life – as also the source of everlasting delight for cricket lovers around the world – made its debut at Edgbaston in 1957, it was Alston, Arlott, Swanton and Ken Ablack who shared the box.
The Johnston jests and other gaffes

Alston, who reputedly brought a grain of sanity into the box housing eccentrics like Arlott and Johnston, had his own exquisite style of delivery, which Peter Baxter termed, “Youthful and slightly schoolmasterly.”

Schoolmasterly or not, there has hardly been anyone in the history of cricket commentary who has escaped Brian Johnston’s famous leg-pulling.

The initial prank, and the subsequent christening, were however, largely unintentional. In those heady days of county cricket, Edgbaston’s hours of play were always somewhat behind the rest of the country. Thus, on one occasion Johnston, reaching the end of his day at Lord’s, passed the commentary on to Alston covering the Warwickshire game with the words, “… so over there for some more balls from Rex Alston.”  From that afternoon, Johnston always addressed his colleague as Balston.

However, in 1962, when the Pakistanis visited England, Johnston’s levity was far more voluntary. Alston was struggling with the rather serious phonetic problems with the commentator’s nightmare of a name ‘Afaq Hussain’ – with first name actually rhyming with ‘duck’. While he was covering the match between the tourists and MCC, Johnston came into the radio box in the Warner stand and said, “I say, Balston, this chap Afaq’s a bit of a problem. Let’s hope he doesn’t get into the Test team.”

Alston clapped his hands on his ears and said, “Don’t say that name, I don’t want it in my mind.” That was too much for Johnston to resist and he left the box repeating, “Afaq, Afaq, Afaq …” The damage was done. As Essex all-rounder Barry Knight prepared to face the next over, Alston said on air, “There’s a change in bowling and we’re going to see Afaq to Knight from the pavilion end – what am I saying, he’s not even playing.”

This was perhaps one queer blemish in a glittering career.

There were, of course, more harmless gaffes, like “Over now to Old John Arlott at Trafford” and “No runs from that over bowled by Jack Young, which means that he has now had four maidens on the trot.” His habit of concentrating hard on the game with two hands clasped on the sides of his head meant a sort of tunnel vision which sometimes landed him in trouble. Once he directed a question to Jim Swanton, only to discover that his co-commentator had left the box for a minute. On another unforgettable occasion, he had asked the expert in the box, Arthur Gilligan, “What do you say, Arthur?” to find the ex-English captain fast asleep. On emphasising his query with a nudge on the ribs, he was rewarded with a standard Gilligan response, “I entirely agree with everything you just said, Rex,” before the veteran cricketer’s chin sunk once more into his chest.
One last time

For all his pranks, Johnston maintained that Alston was, “precise, meticulous, fair and unbiased.”

Alston continued to broadcast regularly until 1964, although he officially retired from the BBC’s staff at the statutory age of 60 in 1961. He subsequently wrote for Daily Telegraph and also authored a number of books.

In 1987, a year after reading his own obituary, the much loved commentator, with a voice which sounded very young even at his ripe old age, was recalled one last time to the box of Test Match Special, to turn the clock back on the Saturday of the MCC bi-centennial ‘Test’ of 1987. There were obvious difficulties – mainly, his chronic problems with the names of Pakistani cricketers “It’s Abdul what-not. My word he’s a good bowler, he is.”  But, so popular was his stint that he was persuaded to do a 20 minute encore.

When he did pass away in 1994, fellow commentator Robert Hudson wrote in The Independent that he had been a fine broadcaster and a kindly man, while adding “Sadly, he will not read this obituary.”

(Arunabha Sengupta is a cricket historian and Chief Cricket Writer at CricketCountry. He writes about the history and the romance of the game, punctuated often by opinions about modern day cricket, while his post-graduate degree in statistics peeps through in occasional analytical pieces. The author of three novels, he can be followed on Twitter at http://twitter.com/senantix)
Earlier parts:
1.  Alan McGilvray

Australia can rotate fast bowlers without weakening the side: Mickey Arthur