The human reactions we see around the sports cricket and football included are always the same.

Cricket fans perceive themselves as the elites following the most noble of games. Football adherents think they are serving the King of Sports. Arunabha Sengupta reflects how in many respects these are just many ways to the same goal.

In the introduction to the volume, the duo refers to the words of James Hamilton Muir in the latter s work Glasgow in 1901. Muir writes, The best thing about football was that it gave workers something to talk about.

Building on this theme, Koller and Br ndle continue: Football is fundamentally about communication. It provides the context for energetic debates about the proper strategies that the coach of the home team should pursue, wistful memories of a past golden age, as well as apocalyptic visions of decline in the next season.

Now, sit back and reflect.

Giving the workers (replace workers with software engineers or any other trade) something to talk about. Energetic debates about the strategies that the professionals in charge of playing and managing should pursue, discussed over lunch by bank accountants or junior clerks of law firms.

Replace football with cricket and all these hold true.

And finally, wistful memories of a past golden age, and apocalyptic visions of decline in the next season. Does one even need to elaborate on that? The glory days when those great players used to play for us, in the days when I was young and now we are going steadily into decline they don t make them like those heroes of the yesteryears anymore

This spiral into decay and doom has been going on since the beginning of cricket. Based on the doomsday prophets from the early days, by now the game should have been done and dusted in the fatalistic sense. Only, it goes on and grows more powerful by the day That is how cricket, football and everything else in life carries on.

Well, not only fans. If we read about the football critics as well, we find every sentence can be lifted seamlessly if we transfer it into the cricket world.

( Every footballer has his own style. For analysts also it is the same. You have analysts who provoke, analysts who scream, analysts who will try to befriend everyone. In television shows viewers often get the complete picture of the mix. )

After all cricket and football are just human occupations. And the human reactions we see around the sports are always the same. 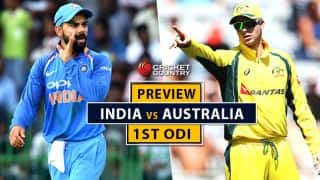