May 21, 1827. One of those rare moments in the history of the game when man s best friend accompanied him on to the ground and ended up demolishing the opponents. Arunabha Sengupta recounts the incredible events of the day.

May 21, 1827. One of those rare moments in the history of the game when man s best friend accompanied him on to the ground and ended up demolishing the opponents. Arunabha Sengupta recounts the incredible events of the day.

Farmer Francis Trumper, a farmer at Harefield, owned a thoroughbred sheepdog. A magnificent sample of the species. Unfortunately, the name of this extraordinary animal, perhaps the first great fielder of the game, is not recorded.

And then there were two gentlemen of Middlesex, whose names have also fallen through the sieves of history. That summer, these two gentlemen challenged Trumper and his dog. The stakes were really high, and they were to face off in a two-innings game.

The name Trumper evokes immense romanticism in cricket. But all that was to take place three-quarters of a century down the line. All that this weird challenge ended up doing was to be the talk of the town for three weeks, leading up to the match. Ante-post odds were 5-1 against Trumper and his dog.

On a clear summer day on May 21, a considerable crowd turned up to watch the proceedings. What happened next was reported by The Times: The dog always stood near his master as he was going to bowl, and the moment the ball was hit he kept his eye upon it and started after it with speed; and, on his master running up to the wicket, the dog would carry the ball in his mouth and put it in his master s hand with such wonderful quickness, that the gentlemen found it hard to get a run, even from a very long hit.

Perhaps the first match-changing performance by a fielder.

As a result, the gentlemen could make only 3 after going in first. Trumper went in next and scored 3 for himself. And then, following the agreed upon rules, he batted for the dog and scored 2 more.

Thus the man and his dog managed a lead of 2 runs, a considerable 67% of the score of the two gentlemen of Middlesex. The odds were lowered to 4-1.

Thus the man and the dog triumphed by 2 wickets.

The Times adds: The money lost and won on the occasion was considerable, as a great number of gentlemen came from Uxbridge and the neighbouring towns and villages to see so extraordinary a game.

This dog surely had his day. 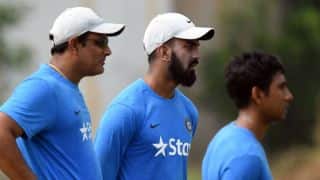